Benefactors Beverly and Joseph Mitchell commissioned the late muralist Terry Schoonhoven to create this enormous 1999 work, which salutes the important contributions of the Jewish people and Jewish law to modern medicine.

The mural begins with the Old Testament and moves forward through 4,000 years of history, with such prominent figures as the 6th century's Asaph the physician, psychiatrist Sigmund Freud, bacteriologist Jonas Salk, researcher Paul Ehrlich and scientist Stanley Cohen.

It ends with a look toward the future, referencing medical imaging, transplantation, gene therapy, molecular biology and other advances.

The mural highlights the importance of the Talmud, which expands upon and explains references in the Bible to health and wellbeing.

"Schoonhoven did a lot of murals around the city of Los Angeles. Many of those have been lost. This is one of the last surviving murals he made." 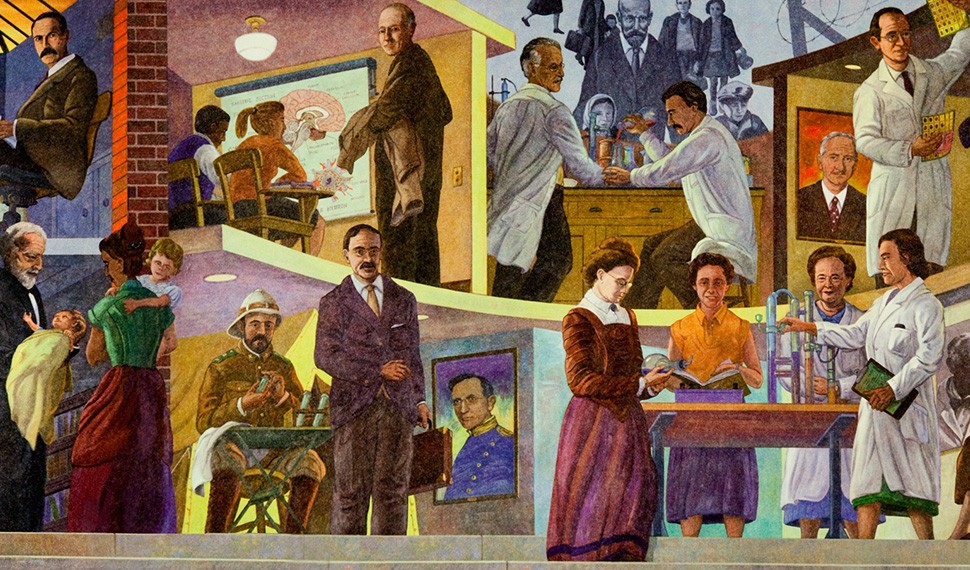 4,000 YEARS
The extensive contributions to medical learning, research and practice by men and women in Jewish history are featured in Terry Schoonhoven's unusual mural.
JEOPARDY ANSWER
And the question is, "Alex, what is the Schoonhoven Mural known as 'Jewish Contributions to Medicine?'"
PANEL BY PANEL
Artist Terry Schoonhoven painted his mural in his studio and oversaw its assembly in the Harvey Morse Auditorium at Cedars-Sinai.

Cedars-Sinai's chaplains, representing many religious faiths and cultural backgrounds, offer support to patients and their loved ones as an integral part of the healthcare team.