As baseball heads into the final weeks of the regular season, Cedars-Sinai has opened a special exhibit, "Take Me Out to the Ball Game, 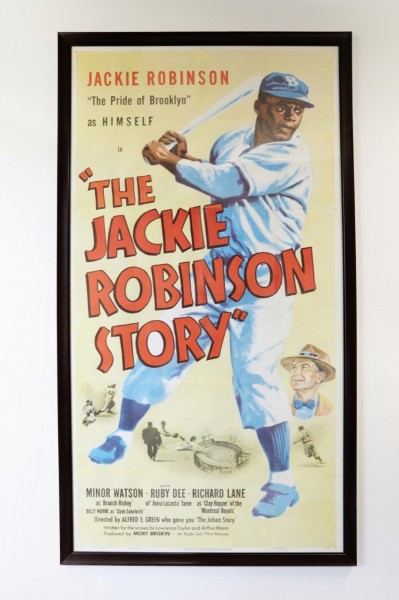 100+ Years of Baseball Movies & Entertainment." It features hand-drawn posters of classic baseball-themed movies and, in all, consists of 35 items.

Those films cover such famous titles as It Happens Every Spring, Casey at the Bat and The Jackie Robinson Story, along with five movies recalling the old New York Yankees-Brooklyn Dodgers rivalry, including The Pride of the Yankees.

Not only are some of the depicted sluggers—including Robinson and Babe Ruth—larger-than-life figures. The posters themselves also are king-size, some 6-feet-tall or more, adding power to the striking display.

Cedars-Sinai is known for its extensive, museum-caliber fine arts collection, so "Take Me Out to the Ball Game" is a sort of changeup pitch for the medical center. Or, to put it another way, "It is, pardon the pun, a little out of left field for us," said John T. Lange, curator of Cedars-Sinai's art collection.

Yet, Lange said that, after he and members of Cedars-Sinai's Advisory Council for the Arts explored the idea, they realized the exhibit could be a home run. "The more we talked about it, the more we realized, we should do this," Lange said. "Though it's a little bit different, it's a very fun exhibit. And I think one of the things we're trying to do with special exhibits is to reach a wider audience."

Along with the love so many people who work at the medical center have for baseball, Lange said, Cedars-Sinai's prominence in sports medicine and its historic ties to the Los Angeles Dodgers all figured into the thinking behind the exhibit.

The majority of the posters on display are for movies from 1927 to 1962. Lange decided to focus on that 35-year stretch for several

The posters are on loan from Gary Cypres, a semi-retired businessperson who describes himself as a rabid collector of baseball and other sports memorabilia. He is the founder and chief executive of the Sports Museum of Los Angeles, a private museum of sports memorabilia located downtown.

Cypres also has ties to Cedars-Sinai. His wife, Kathi, has been a member of the Cedars-Sinai Board of Governors since 2015.

For Cypres, the posters are far more than just artifacts of legendary baseball players and movies. "First and foremost, I look at those posters as pieces of art," he said. "The old movie posters were gorgeous stone lithographs with beautiful colors."

Cypres also is enchanted by the history his posters represent. "Within baseball, you can find the story of America, and through the motion pictures, with their underlying themes, you can do the same," he said.

Born in 1943 in the Bronx, home to the New York Yankees, Cypres grew up amid the storied Yankees-Brooklyn Dodgers rivalry of the 1940s and 1950s. Back then, he said, the Brooklyn Dodgers were "the ultimate enemy of a Bronx boy."

But things changed after Cypres' business career brought him to Los Angeles in the early 1980s, nearly a quarter-century after the Dodgers arrived here. He learned to love the team and threw himself into collecting Dodger memorabilia. Over the years, Cypres has exhibited items at Dodger Stadium, including a display tied in with the July 19 All-Star game played at the ballpark this year.

Among the items Cypres loaned that inspire Lange is a hand-illustrated poster of Babe Ruth for the movie Babe Comes Home.

Lange also noted a photo that was included in the exhibit to complement a section of posters highlighting women in baseball. The photo shows a female player sliding into a base while wearing a skirt. "Having played baseball myself when I was young, I can't imagine doing that in shorts or a skirt," he said. The women who did that "must have been tearing up their legs. I don't know how they did it. They were tough, tough players for sure."

One goal of the exhibit, Lange said, is to grab the attention of Cedars-Sinai personnel—including those who, amid their busy routines, might no longer notice the medical center's art collection. "When we make a change and do something like this, that catches their eye," he said. "They start to look again, and they start to see everything else."

Read more on the Cedars-Sinai Blog: My Favorite Artwork: Employees Reflect on Art and Healing

In Celebration of Hispanic and Latinx Heritage Month, Works Are Available for Public Viewing via Digital Gallery

An Artist, a Collector and a Curator to Join Smithsonian Art Museum Leader on the Healing Power of Diversity in Art

It's routine to toss out medication vial caps when they pile up at a hospital nursing station. But a group of oncology nurses at Cedars-Sinai embraced a more creative idea: They turned their caps of many colors into a work of art.And it wasn't just …
Read more