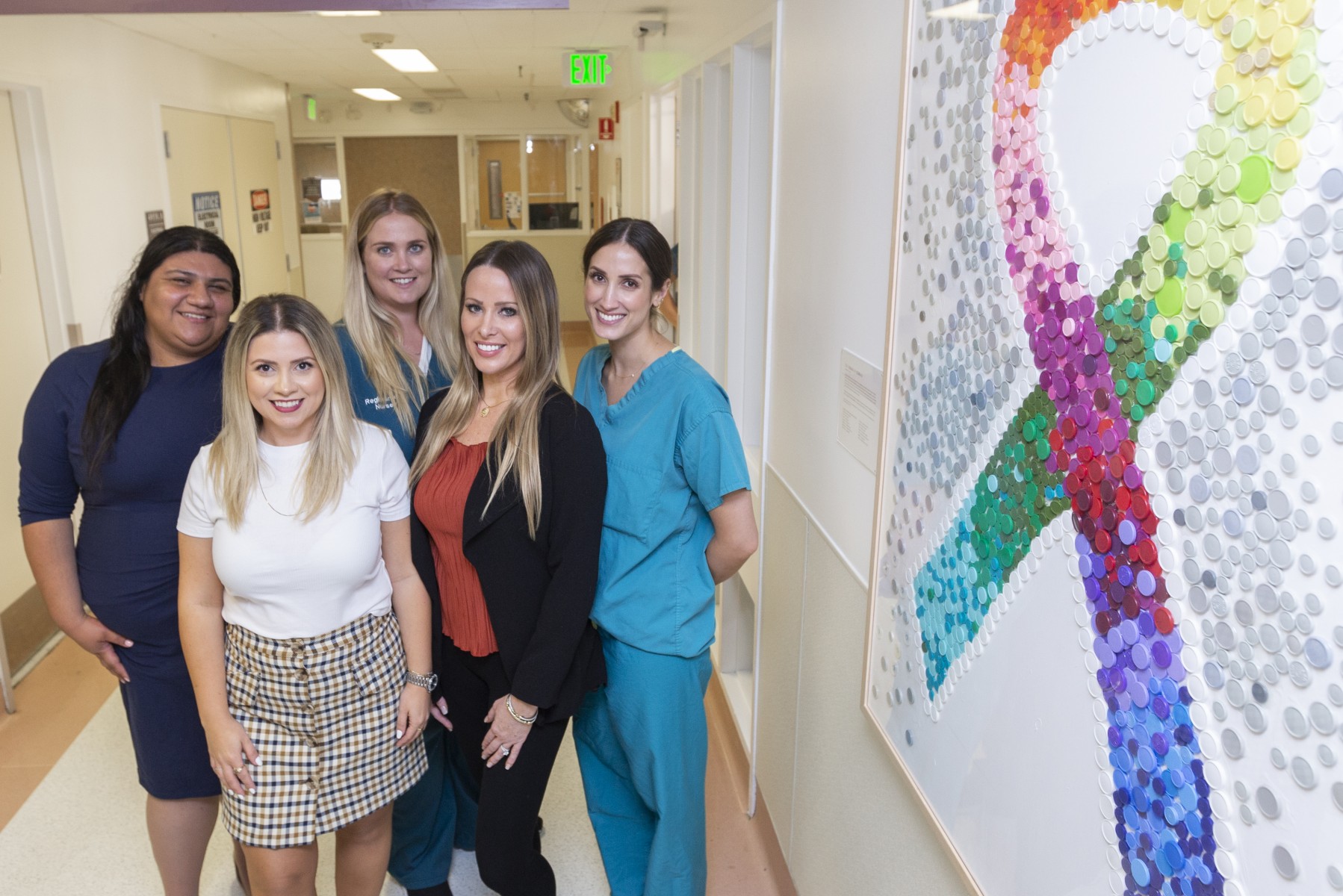 It's routine to toss out medication vial caps when they pile up at a hospital nursing station. But a group of oncology nurses at Cedars-Sinai embraced a more creative idea: They turned their caps of many colors into a work of art.

And it wasn't just any kind of artwork, but one dedicated to current and former patients. Hundreds of caps were fashioned into a design on canvas based on the cancer ribbon, the loops that people pin on to support people with cancer or to raise awareness about the disease.

The piece by the nurses is highlighted by hues that reflect the categories of cancer (pink for breast cancer, white for lung cancer, dark blue for colon cancer, etc.), and it was named "The Colors of Courage."

"We want to give patients more hope," explained Sarah Bishop, RN, OCN, one of the oncology nurses who worked on the project.

The artwork was officially unveiled on Sept. 25 during a brief ceremony. It was hung on a wall in 4 South of the medical center, intended as a source of inspiration for the patients being treated nearby in the oncology unit.

The idea of using medication vial caps for a work of art came from Claudia Maldonado-Howell, MSN, FNP, CMSRN, an assistant nurse manager in 4 South. For more than a year, she and her colleagues stashed the caps in plastic bins at the nursing station.

"We didn't know what we were making," said Maldonado-Howell. "We didn't know how much we needed, what colors. So, we just collected, and pretty much everybody on the unit started pitching in."

She took one pile after another home and, with her husband, sorted them by color.

Finally, one afternoon last November, six of the nurses gathered at Bishop's Sherman Oaks home and worked until about 11 p.m. to make the piece.

There were moments when it appeared as though the work couldn't be completed in a single day, but, "We got together, and we were like, 'Let's do this,'" said Silva Amirkhanian, BSN, RN, CMSRN, a charge nurse who took on the role of creative director of the project. "It was a lot of work, but we really put our heads together, got our energy together and finished it."

The project had special meaning for Bishop, who lost an aunt to brain cancer in early 2018. Bishop’s colleagues represented her aunt in the artwork by using gray vial caps in the background—gray being the color representing brain cancer.

Although "The Colors of Courage" mainly was intended for current and previous Cedars-Sinai patients, including those who have passed away, Bishop said, "It meant so much that they wanted to take the time to make sure that we put a little special touch into the project to incorporate my aunt."

Amirkhanian said her hope is that the artwork will remind patients that "we care about them, and we want them to do well."

That gesture toward patients came as no surprise to Amy Cutter, a former patient on 4 South who went through six rounds of chemotherapy from April through August this year, before being declared cancer-free. She showed up on Sept. 25 for an appointment and to deliver a "thank-you" present, a fruit arrangement, for the doctors, nurses and others who cared for her—and then she learned about the artwork and the unveiling ceremony.

Cutter said the nurses, along with all of the other healthcare personnel she encountered, "have patient care in their DNA. They don't know how to be any different."

The artwork is at the end of a hallway where patients often pass when they walk around the floor for exercise. "While I was here, I was doing laps in the floor to maintain my endurance. And I would look at all the artwork on the walls," Cutter said. "So, the fact that that [the vial cap artwork] is there to enjoy, and to appreciate, is just beyond words."

This isn't necessarily the last piece of medication vial cap art by Cedars-Sinai nurses that patients will see. "I still have a bunch" of the caps, Maldonado-Howell explained. "That's why we maybe want to eventually do another one."