Kelli White's flight from Thailand had just landed in Los Angeles when she suddenly felt lightheaded and lost consciousness.

Paramedics rushed the 31-year-old mother to the emergency room at nearby Cedars-Sinai Marina del Rey Hospital, where the ER doctor contacted the stroke team at Cedars-Sinai in Los Angeles.

The average patient loses about 1.9 million brain cells every minute a stroke is untreated.

Within minutes, neurologists—who are experts at treating strokes—were able to evaluate Kelli via video technology.

Kelli was quickly diagnosed with an ischemic stroke and a pulmonary embolism. She received clot-busting medication to restore blood flow to her brain before being transported to Cedars-Sinai in LA for further treatment.

"They were able to say what to do right away and that's what saved me," says Kelli, who is recovering back home with her family in Yuma, Arizona. "It's amazing how they can use this technology."

In Discoveries: My Favorite Innovation

The telestroke program started in January 2015 to offer urgent treatment to patients like Kelli at Marina del Rey and Torrance Memorial hospitals, where neurologists were not always immediately available to treat stroke patients.

ER doctors at the regional hospitals contact the telestroke team immediately if a patient is exhibiting stroke-like symptoms, such as slurred speech, loss of vision, or arm weakness.

Via video, the neurologist performs an exam, reviews CT scans and/or MRIs, and speaks with any friends or family members accompanying the patient about when they first noticed symptoms.

In the Newsroom: Affiliation of Cedars-Sinai and Torrance Memorial Official

The average patient loses about 1.9 million brain cells every minute a stroke is untreated.

ER doctors need input from a neurologist with stroke expertise as soon as possible.

"We're working against the clock," says Dr. Shlee Song, director of the Cedars-Sinai Stroke Program and part of the team who treated Kelli. "Every minute counts when it comes to joint treatment decisions with the ER physician." 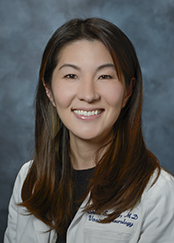 Quickly getting clot-busting drugs like tissue plasminogen activator, or tPA, to the person having a stroke is crucial.

To recognize the sudden onset of symptoms, stroke experts recommend memorizing an acronym—FAST:

"The brain can survive only so long when it is deprived of blood and oxygen," Dr. Song says.

Kelli, who suffered her stroke in January 2019, is among more than 1,000 patients who have benefited from the telestroke program. She feels fortunate that her stroke occurred after landing in Los Angeles instead of over the Pacific Ocean.

While she is regaining her physical and cognitive abilities, Kelli is thankful to be alive to see her 5-year-old daughter and 3-year-old son grow up.

"I can't imagine what would have happened if I was on the plane. That's the scary part of it," she says.

"I'm lucky I was in the right place at the right time with people who were prepared to help me."