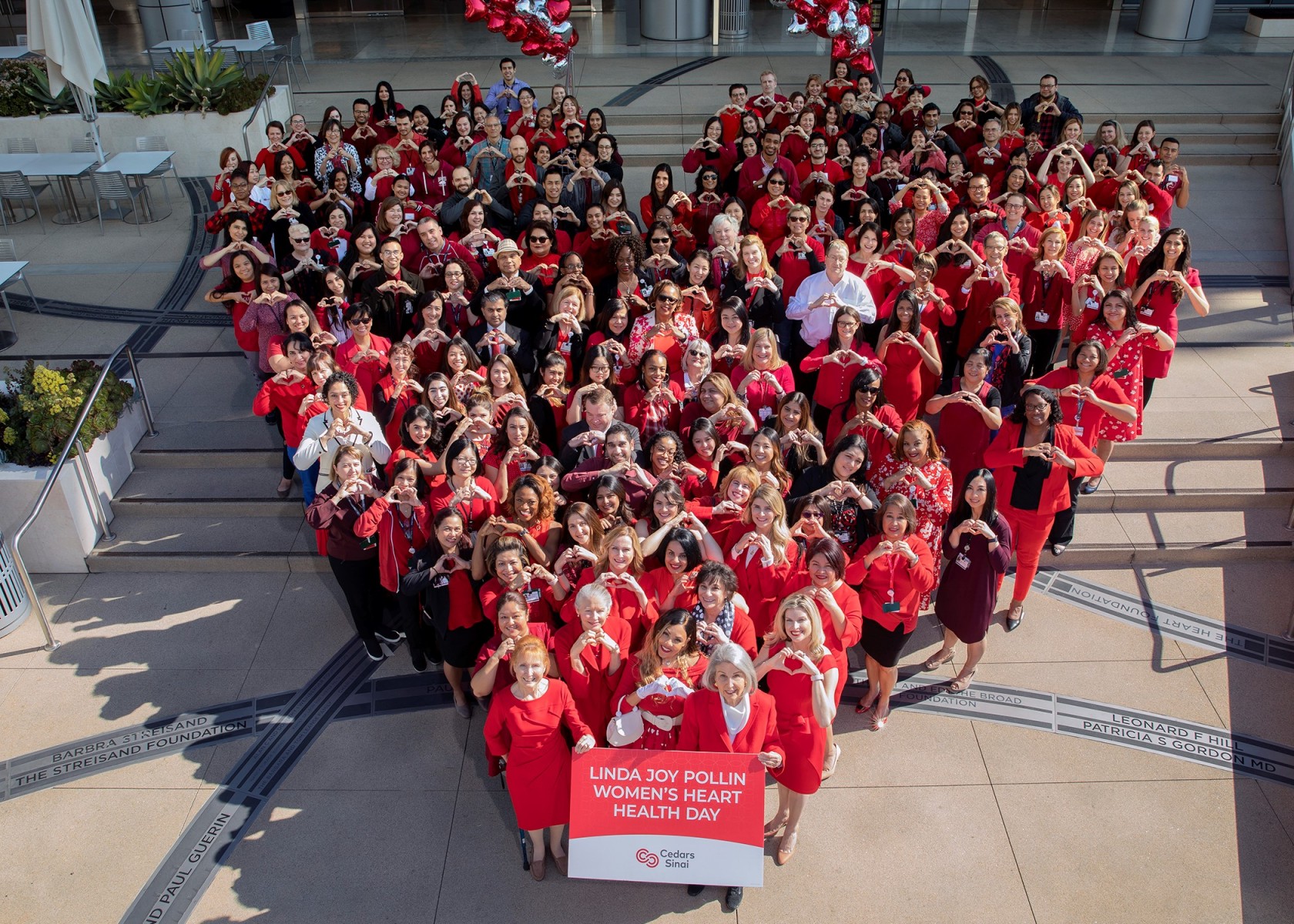 Cedars-Sinai health professionals dressed in red to show support for heart disease, the No 1. killer of women. Photo by Cedars-Sinai

Heart disease is the No. 1 killer of women in this country as well as of Americans overall. For decades, though, researchers regularly ignored cardiovascular ailments in women.

Even today, experts say, awareness of the dangers and the quality of the treatment females receive continue to suffer from the legacy of heart disease long being regarded as mainly a problem for men.

Scarlet garb was the order of the day among Cedars-Sinai staffers and guests attending the program. Activities began in the morning, with attendees heading to wellness stations where they received blood pressure screenings and cardiac risk assessments.

The program continued with a heart healthy Mediterranean-style lunch and presentations by five experts on new heart health-related medical research and guidelines. Topics included scientific progress on a twice-a-year injectable that might eventually reduce the health risks from dangerously high levels of cholesterol. There also was discussion of diet and alcohol issues, intermittent fasting, the use of low-dose aspirin and controlling hypertension.

“We, as a medical community, want our employees to understand the issues so that they can provide better care for our female patients—52% of the population we serve. In addition, they can be aware of their own health and that of their families and therefore be good ambassadors for our community as well as the excellent care providers that they are,” said Noel Bairey Merz, MD, the director of the Barbra Streisand Women's Heart Center in the Smidt Heart Institute.

Margo B. Minissian, PhD, ACNP MSN, a faculty research scientist in the Barbra Streisand Women's Heart Center and the director of the Linda Joy Pollin Women’s Heart Health Day event at Cedars-Sinai since it was launched in 2006, emphasized the need for women to be proactive in combatting cardiovascular disease.

In addition, she said in an interview, women also need “to be able to listen to our bodies. “And if something doesn't seem right, and they're having any kind of symptom that’s happening above their waist, they should go see their doctor for an evaluation,” Minissian added. She noted that symptoms often are different for women than for men.

When something seems wrong, Minissian added, women should “not take ‘no’ for an answer until they’re certain that they’ve gotten to the bottom of the problem.”

Friday’s activities came days after the American Heart Association reported that heart disease remains the nation’s No. 1 killer—even though, according to the latest statistics, the annual death rate attributed to coronary heath disease fell 28.1% from 2007 to 2017. “The burden and risk factors remain alarmingly high,” the AHA said.

Cardiovascular diseases—which claim more lives every year than all forms of cancer and chronic lower respiratory disease combined—accounted for 859,125 U.S. deaths in 2017. Even though doctors for years considered heart problems mainly a problem for men, in 2017 nearly half—48.7 percent—of those deaths were women.

The Cedars-Sinai event was named for the late Linda Joy Pollin, who was born with serious congenital heart disease and died at the age of 16.

Merz said that Pollin has supported the center based on her conviction “that if you are born with a healthy heart, you should maintain it, and there are so many things we can do now to prevent, detect and reverse heart disease.”

In addition, Merz said, “She wants to eliminate the disparities that impact women.”

Read more on the Cedars-Sinai Blog: Women's Health: A Revolution in Research and Care