A study published this week in the Journal of the American College of Cardiology (JACC) found that seven major cardiovascular societies were more likely to distribute awards to men and white individuals when compared to women and those who identify as Asian, Hispanic/Latino, and Black.

“Women received significantly fewer awards than men in all societies, countries and award categories,” said Martha Gulati, MD, senior and corresponding author of the study, and  director of Preventive Cardiology in the Smidt Heart Institute at Cedars-Sinai. “The same sentiment was true for minority groups, which suggests there are several factors at play, including implicit bias. This bias may be responsible for preventing underrepresented groups from ascending the academic ladder and receiving senior awards like lifetime achievement awards.” 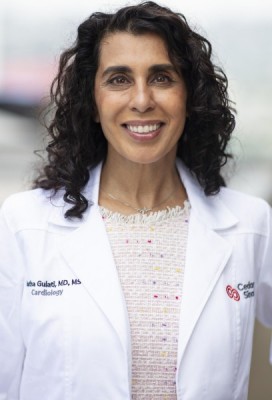 For their gender analysis, researchers looked into 169 awards after excluding female-specific awards. These 169 awards were distributed to 2,995 recipients; 76.2% of awardees were men and 23.8% were women.

Researchers say that given the increased emphasis on redesigning cardiovascular healthcare delivery by incorporating the tenets of diversity, equity and inclusion (DEI), cardiovascular societies have a significant role as core influencers.

“Equitable award distribution can be a key strategy to celebrate women and diverse members of the cardiovascular workforce and promulgate DEI,” said Gulati, also associate director of the Preventive and Rehabilitative Cardiac Center and associate director of the Barbra Streisand Women’s Heart Center. “Recognition of their contributions is pivotal to enhancing their self-perception. In addition to boosting confidence, receiving an award can also catalyze their career trajectory.”

Cedars-Sinai has been awarded a five-year, $8 million grant from California’s stem cell agency to launch an innovative new clinic that will expand patients’ access to stem cell and gene therapies, increase research and training in regenerative …
Read more