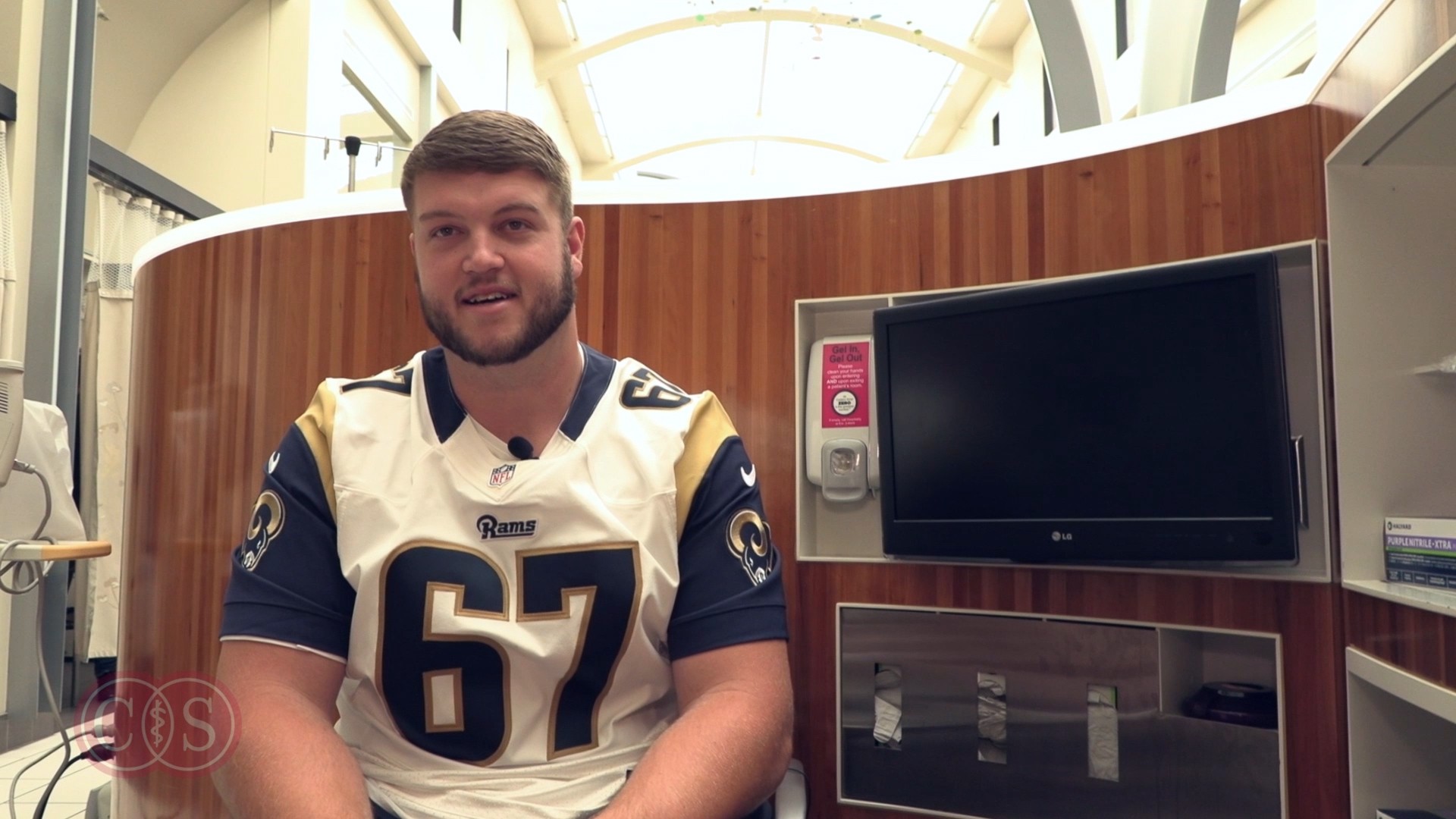 The tall, burly 22-year-old offensive tackle with an easy smile and eagerness to engage met individually with several patients in the cancer infusion center. He told the story of how he handled learning about his non-Hodgkin's lymphoma diagnosis about two years ago, before his senior year of college. He discovered a lump on his leg during football practice, and at first dismissed it. How could a young, fit athlete have anything serious to worry about, he thought. At the time, he served as team captain and a starter for the Middle Tennessee Blue Raiders.

To his surprise, he found out that he had a rare form of cancer, a diagnosis that stopped him in his tracks. Not long after that, he got a correct diagnosis of non-Hodgkin's lymphoma, a cancer that originates in the lymphatic system—the disease-fighting network spread throughout the body. Non-Hodgkin's lymphoma is more common than the other general type of the disease—Hodgkin lymphoma.

Undeterred, Brewer continued to play throughout his chemotherapy, which helped him maintain a positive attitude, he said.

"It was tough, but I tried to stay upbeat during the time I had treatments," said Brewer, who grew up playing football in Alabama. "It helps to stay positive, and to share your own story with other people. I know I feel the energy in the rooms of patients I visit."

Earlier this year, Brewer joined his Rams teammates for a visit to Cedars-Sinai, when he also connected with patients in the cancer infusion units.

Among those he chatted up was Hannah Lottenberg, 20, who had wrapped up an appointment with her physician. The two cancer survivors exchanged stories for 10 minutes. Lottenberg, a college student, emerged from their private conversation with a big smile on her face. That reaction was contagious as Brewer made his rounds.

"It's crazy that I get to do what I love," Brewer said, referring both to playing professional football and engaging with patients with whom he shares common life challenges. "I want to talk about cancer as a teaching moment, to help take away the fear," Brewer said.

"Being able to do this is a no-brainer," Brewer added. "I wouldn't miss this for the world."

Read another story about the power of positivity on the Cedars-Sinai blog: Climbing Beyond Cancer