The white spots in the MRI image on the left are T-cells in brain cancer patient Michael Wulfe’s brain, still preventing glioblastoma after 16 years. Image by Cedars-Sinai.

Recently, Michael Wulfe, who is 61 and lives in West Hollywood, was on the phone with his sister, Stephanie Wulfe, in Dallas. They talk at least once a day, but that day, something wasn’t right. “I was talking, and then I didn’t have the words,” Wulfe said. “My sister immediately said, ‘Call Cedars-Sinai!’”

They were both afraid that the cancer Wulfe had recovered from 16 years earlier—a deadly type of brain tumor called glioblastoma—had come back.

At Cedars-Sinai the next day, Wulfe was relieved to learn his cancer wasn’t back. And his neurosurgeon, John Yu, MD, director of Surgical 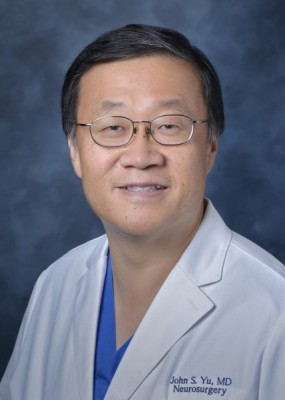 Neuro-Oncology and vice chair of Neurosurgical Oncology in the Department of Neurosurgery at Cedars-Sinai, was happy to hear that his patient was still cancer-free after 16 years, and that Yu’s decades-long quest to create a vaccine against glioblastoma remained on the right track.

Glioblastoma, the most common and most lethal type of brain tumor, can grow with alarming speed. It is the type of tumor that killed Senators John McCain and Ted Kennedy, and President Joe Biden’s son, Beau.

“The median survival for someone with glioblastoma is about 14 months after diagnosis,” Yu said. “And so, almost uniformly, patients die within that time frame, or not too long thereafter.”

Wulfe and at least two other participants from the first clinical trial of Yu’s vaccine have lived more than 10 years, and most of the others lived three times as long as expected, Yu said. Those results prompted a Phase II trial in 25 centers across the U.S., which began in 2011, and also showed promising results.

Yu and his team are set to launch a clinical trial of a new-and-improved version of the vaccine in the coming months.

In 2000, Yu and colleagues in the Yu Laboratory began testing a new way to treat glioblastoma tumors, which are difficult to remove surgically and resistant to chemotherapy and radiation treatment. They started by removing immune cells called dendritic cells from each patient’s blood. “They’re the cells that alert the rest of the immune system when something is wrong,” Yu said.

“The dendritic cells are like a detective giving a scent to a bloodhound,” Yu explained. “The T cells are the ‘bloodhound,’ and the proteins are the ‘scent.’ Once the T cells are activated with these proteins, they can find the cancer cells, latch onto them and kill them.”

In 2004, Yu and his team took another important step by becoming the first to identify cancer stem cells in glioblastoma tumors. Stem cells, the body’s raw materials, can divide to create new cells that develop into many different sorts of cells.

“The cancer stem cells looked identical to their good twins, the neural stem cell,” Yu said. “They had the same properties of self-renewal and could develop into all the different cells of the brain—but they would not stop growing!”

In the next version of the vaccine, Yu’s team trained the dendritic cells to recognize the cancer stem cells specifically.

“They are very hardy, and they migrate all over the brain, infiltrating important areas,” Yu said. “But by training immune cells to attack them, we can get at the root of the cancer and get rid of it for good.”

On a Monday in the spring of 2006, after a weekend with a devastating headache, Wulfe took an over-the-counter pain reliever and went to his job at a downtown Los Angeles fashion company specializing in beaded gowns. A couple of hours later, he stood up from his desk, 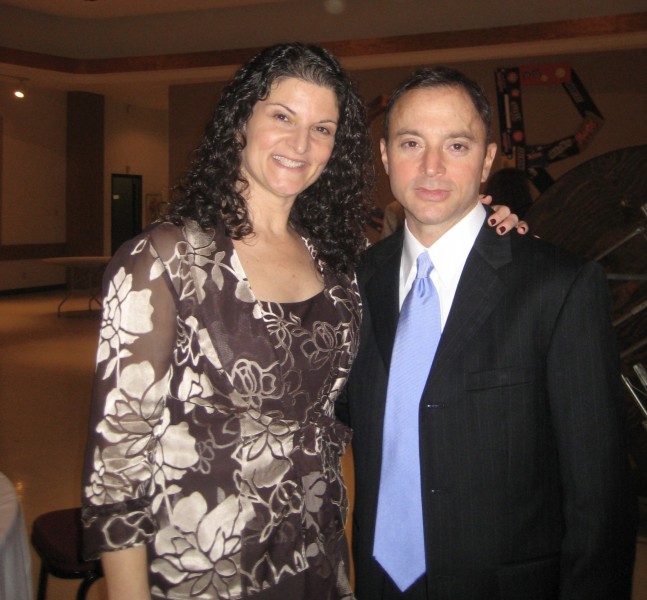 lost consciousness and fell to the floor.

Wulfe’s employer called 911 and Wulfe was eventually taken to Cedars-Sinai. Wulfe was diagnosed with glioblastoma and Yu invited him to enroll in a Phase I clinical trial of his dendritic cell vaccine.

In the fall, after surgery, chemotherapy and radiation treatment, Wulfe was injected with two rounds of dendritic cell vaccine, then had MRI brain scans every three months so doctors could see whether his tumor had come back.

“I was very nervous,” Wulfe said. “But, the first time I went, there was no tumor. The next MRI, no tumor. And then we were getting into the spring, and still no tumor.”

Nine years later, Wulfe’s MRI showed a mass in his brain, but his doctors found, just as they did in March, that the mass wasn’t cancer. It was a cluster of his own immune cells fending off tumors.

“Those cells that defeated the tumor were still there after all these years,” Wulfe said. “That surprised the doctors.”

“My life, in many ways, was relatively perfect until the brain cancer,” said Wulfe, who traveled the world and loved his work in fashion. “I traveled to New York, Chicago, Atlanta and Dallas. How great it was to highlight beaded and sequined dresses. It was better than socks!”

Still, Wulfe said his cancer diagnosis didn’t feel tragic. “It was scary, but what am I going to do?” he said. “Being unhappy about it doesn’t really solve anything.”

In fact, studies have linked a positive attitude with a stronger immune system, Yu said.

“Michael realizes what a gift life is,” Yu said. “He runs, he writes poetry, he enjoys life, and he’s lived this way for the past 16 years. I really do think that fighting spirit—and his sense of humor—makes his immune system stronger.”

During the procedure to remove his tumor, for instance, Wulfe was asked to name the items in a series of photos so surgeons could monitor his cognitive function. “When they got to the watch, I said, ‘Rolex,’ and I could hear Dr. Yu laughing because he knew I was being funny,” Wulfe said. “The humor helps.”

Wulfe said his family, especially his sister, has also kept him going.

“You assume your immediate family members have your back, and I certainly can testify,” Wulfe said. “Whenever I call, Stephanie is the first one to drop everything and be on the next plane. All my doctors and their staffs know her, and she always gets the best for me.”

Wulfe, meanwhile, provides inspiration for Yu and his team.

“Michael makes my day every time I see him,” Yu said. “Michael’s immune system really responded to the immunotherapy he received in 2006, and we’d love to be able to generate that in more patients. So we’re creating a more potent immunotherapy with a larger number of stronger T cells to fight these tumors.”

Read more on the Cedars-Sinai Blog: A Trial for Every Brain Tumor

After two and a half years of living through the COVID-19 pandemic, the upcoming long weekend can feel like a respite from the constant stress, says Itai Danovitch, MD, MBA, chair of Cedars-Sinai’s Department of Psychiatry and Behavioral …
Read more