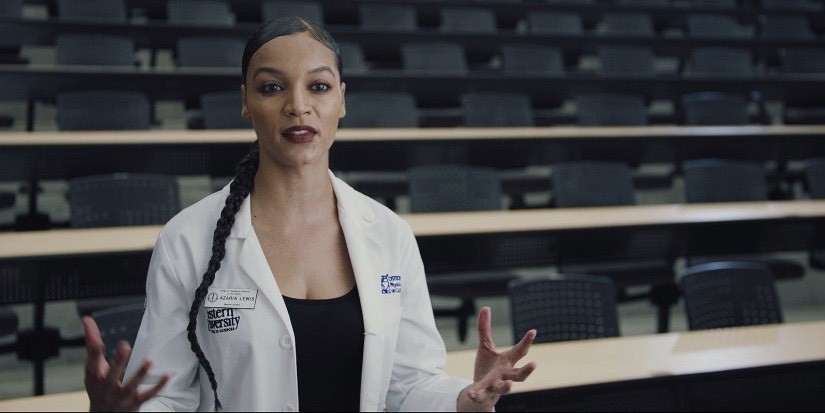 Azaria Lewis (Photo is from a still image from an upcoming documentary 'Fixing Healthcare', a Nick Webb film, directed and produced by Karl Stelter of Journeymen Studios.)

To put it mildly, Azaria Lewis has a very full plate.

Lewis is a second-year osteopathic medicine student, a teaching assistant and president of her campus' newly formed White Coats for Black Lives chapter—while also paying her bills by working part-time as a model.

What's more, she recently has gotten involved in volunteer work to help sexual assault survivors and the Pomona Homeless Outreach Program. All of that is happening along with returning to Cedars-Sinai for another in her series of research internships at the medical center, opportunities Lewis credits with playing a huge role with her admission to osteopathic medical school.

Lewis isn't fazed by her jam-packed schedule. She says she is inspired by her father. He got started in healthcare as a hospital janitor, and spent years juggling multiple jobs along with going to nursing school. Today he is a surgical registered nurse with a full-time position at one facility and a part- time role at another. "He's truly the hardest-working person I know," Lewis said.

Since childhood she has been attracted to a career in medicine. "You can help people in many, many different roles. But the draw for me was helping people in a way that I saw as the most powerful," Lewis said.

She wants to go into family medicine. In her future practice, she plans to emphasize the importance of fitness and the benefits of good nutrition and a plant-based diet. (Lewis, a star pole vaulter in high school, has been a vegan for about eight years.)

The daughter of a black father and a white mother, Lewis speaks passionately about helping underserved minority patients and playing a role in overcoming health inequities. "Being biracial really framed my outlook in a powerful way," she said.

Getting into an osteopathic medical school, though, was a struggle. She didn't have the grades to even apply when she earned her undergraduate degree from University of California, Davis, in 2012. Although Lewis completed her bachelor's degree in four years, she said her studies were hampered by personal and family crises. One of those crises was suffering a sexual assault, a trauma that motivated her decision to be a volunteer advocate for sexual assault survivors, she said.

To find her way into medicine after graduating from college, Lewis pursued internships. In 2014, Lewis landed the first of what are now four research internships at Cedars-Sinai.

Manisha Chaudhary, Cedars-Sinai's program manager for academic visitor and internship programs, remembers meeting Lewis then and being impressed. "She was doing all these wonderful things," including tutoring students, Chaudhary said. "I couldn't even listen to everything she had going on and keep it straight in my head! I was just so fascinated by her."

I just can't sit back. If I have a free moment, I'm going to use it so that we can progress and we can elevate and we can make change.

Lewis also began a two-year post-baccalaureate certificate program at Charles R. Drew University of Medicine and Science in Los Angeles, and she thrived there.

After finishing at Drew, Lewis applied to several osteopathic medical schools —and didn't get into any. "I didn't even get called for an interview," Lewis said. "I was so disappointed."

But that didn't stop her. Next Lewis entered a one-year master of science in medical sciences program at Western University of Health Sciences in Pomona. After graduating first in her class with a 3.96 grade point average, she was admitted to the university's osteopathic medicine college.

"She didn't let up. That's just the type of person she is," Chaudhary said.

Enrolling in the master's program, Lewis said, "was the best decision I've ever made, because it was so rigorous and so challenging to navigate that in one year. Going through that, I learned how to study, I learned how to interview and I gained confidence."

Lewis, now 30, said her Cedars-Sinai experience also was pivotal in her education.

She is especially thankful for the time she spent under the mentorship of Rodrigo F. Alban, MD, an associate professor of Surgery who researches health disparities, diversity and related public health issues. Lewis is a co- author on several research papers with Alban, including research on the relationship between gun laws and suicides as well as child and young adult mortality.

This month, she began working with Alban again on research investigating consequences of food deserts, which are low-income areas lacking stores that sell affordable vegetables, fruits and other items essential to a healthy diet.

Alban called her previous work with him "phenomenal." He added that Lewis was "very passionate" about research on social issues such as healthcare delivery for underserved populations.

Much of Lewis' internship experience, Alban noted, came through a Cedars- Sinai program for minority students that evolved into the Biomedical Education Pipeline Initiative. Its executive sponsor is Sarah J. Kilpatrick, MD, PhD, in her role as associate dean for faculty development and diversity; Denise Gallagher, the current program manager for the Office of Diversity and Inclusion, helped run the initiative when Lewis began. Alban said such programs can help minority students who are at a disadvantage in entering medicine because, among other reasons, they may lack mentors.

Alban called Lewis "a living example of how a small initiative with a relatively small amount of investment, both financially and administratively, can create and support the development and success of talented individuals."

There's also a side to Lewis that surprises people who know her mainly as a medical student: She has worked as a model since the age of 19. Her clients have included Assault Fitness, KiraGrace yoga clothing, La Blanca swimwear and Trimera Brands apparel.

"It's helpful for income, but it's also a nice outlet because my whole world is science and physiology and anatomy. So, it's nice to kind of have an outlet that's creative when it comes to fashion and that realm," Lewis said.

Out of concern that her side job might be interpreted as a sign that she's not serious about medicine, though, Lewis leaves it off her resume. "When people see that, especially when you're getting into medical programs, they think you're not focused, and I think I've proven that's not the case," she said.

These days, much of her time is taken up with her new role as president of the new White Coats for Black Lives chapter at Western University of Health Sciences. Lewis is in discussions with other students, faculty and administrators about recruiting more diverse faculty and students and weaving anti-racism into the curriculum.

"It's been a conversation that's been really eye-opening and gratifying," Lewis said.

The role also means a lot more work for Lewis but, as usual, that's just fine with her. "I just can't sit back," she said. "If I have a free moment, I'm going to use it so that we can progress and we can elevate and we can make change."

Read more on the Cedars-Sinai Blog: Faces of Cedars-Sinai: Nicole Mitchell, Director of Diversity and Inclusion

Investigators from the Smidt Heart Institute at Cedars-Sinai have found that even subtle forms of liver disease directly impact heart health. The findings, recently published in the journal Frontiers …
Read more
Share this release (opens in dialog)

Women with prolonged mental health problems up to three years after childbirth may be suffering from irregular immune system responses, according to new research by Cedars-Sinai investigators. The …
Read more
Share this release (opens in dialog)