Father's Day: This Father and Son Have A Lot of Heart 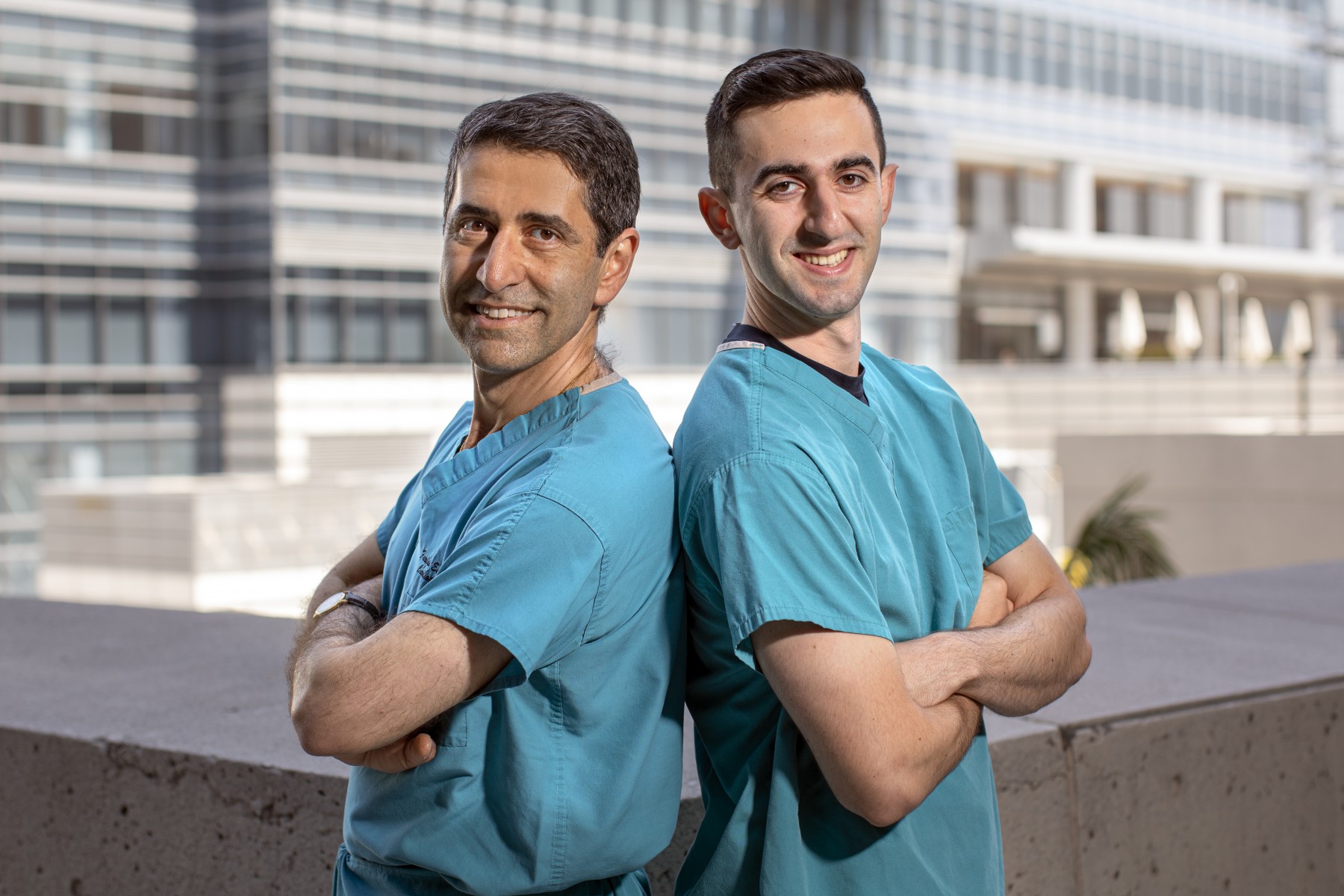 Lots of parents and children go into related lines of work. But not many do it with as much heart–literally–as one father-and-son duo at Cedars-Sinai.

Fardad Esmailian, MD, transplants hearts. His 23-year-old son, Gabby Esmailian, is part of the crew that dashes around California and other states, procuring hearts, and sometimes lungs and livers, before delivering them to waiting Cedars-Sinai surgeons. And occasionally that means the son is making a heart handoff to his dad.

“It's an interesting relationship to have,” said Gabby Esmailian. “People can say, yeah, they work in the family business, but not to this extent. This is a little bit different. We’re talking about life and death here.”

The elder Esmailian --the surgical director for heart transplantation at the Smidt Heart Institute – said it’s “pretty touching” when his son shows up with a heart that he will be transplanting. While the cardiothoracic surgeon emphasized that in those moments he never stops focusing on his patient, he allowed that, for an instant, “it just goes through my mind what a remarkable thing has happened.”

Gabby Esmailian has a theory that “when you grow up with a parent who is in the medical profession, you kind of either love it or hate it.” For evidence, he need look no further than his family. Gabby has fallen in love with medicine while his one sibling--younger brother Aaron, 21–is steering away from the field and is going into his senior year as a business major at the University of Southern California.

Gabby earned a bachelor’s degree in psychobiology last year from UCLA, where he also was on the men’s rowing team for two years and played tenor saxophone in a university band. He got interested in medicine early on. In high school, Gabby volunteered at Cedars-Sinai, escorting patients at the Smidt Heart Institute and eventually assisting on research projects. In recent years, he has given oral presentations at medical research conferences. In August 2016, just before he started his junior year at UCLA, Gabby began his current part-time job as a heart and lung transplant procurement technician.

In that role, when a heart or other organ becomes available for a patient, Gabby rushes with a Cedars-Sinai surgeon to get it, often zooming in by helicopter. Much of his role involves handling communications between the hospital where the donated organ is being harvested and Cedars-Sinai. It’s a job in which every minute counts, because hearts, for instance, are supposed to be transplanted within four to five hours after they are removed from a donor.

Fardad Esmailian--who came to this country from his native Iran in 1978 as a teenager--takes pride in helping build a program at Cedars-Sinai that for years has performed more adult heart transplants than anywhere else in the U.S. It is on track in 2019 to break its previous record high of 132 adult heart transplants in a year.

He appreciates the praise he receives from grateful patients, and he believes that has influenced Gabby’s outlook on medicine.

At social gatherings held twice a year with patients who have received heart transplants at Cedars-Sinai, Fardad Esmailian said, Gabby has gotten into conversations with patients who “would talk to him about my kind of work” and say things like, 'Your dad saved my life.'”

“I think that had an impact on him,” said Fardad Esmailian.

Gabby agrees, but said he avoids bringing up who his father is when he’s on organ-procurement duty. Still, when he arrives at donor hospitals and medical staffers notice his last name, he often hears praise for his dad. “I'm humbled by what he’s done,” Gabby said. “He is very well-respected and almost really world-renowned for what he does and the gift that he gives his patients.”

Now Gabby is looking to follow his father’s footsteps further. In August, he will begin medical school at George Washington University in Washington, D.C. – the same school where his father became an MD.

Gabby is giving himself time to decide which area of medicine to pursue. His father clearly would be delighted if Gabby ultimately chooses his field. As the 57-year-old Esmailian put it, “By the time he finishes [medical school], if he decides to do cardiac surgery, I will be toward the tail end of my career, and maybe I can pass the baton to him and teach him a few things. That would be pretty remarkable, but if it doesn't, that’s OK.”

“They're both great kids,” Fardad Esmailian said of his two sons. “As a parent, I think I’ve done OK.”

Father's Day: This Father and Son Have A Lot of Heart