In these microscopic images of brains from mice with urinary tract infections, areas of injury are shown in green. There was less brain injury and fewer delirium-like behaviors in mice treated with estrogen (“17b-estradiol”) than in those treated with a placebo (“vehicle”).

Delirium is common among women with urinary tract infections (UTIs)—especially those who have experienced menopause. Investigators from Cedars-Sinai, working with laboratory mice, have been able to prevent symptoms of the condition with estrogen, which is commonly used for hormone replacement therapy. Their study was published in the peer-reviewed journal Scientific Reports. 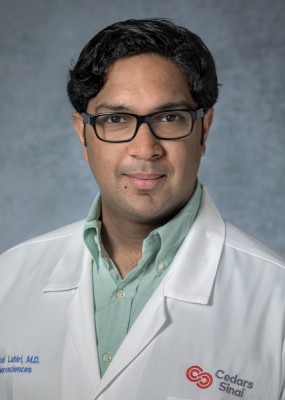 “There has been a resurgence of interest in hormone replacement therapy, and this study, which builds on our previous work, shows that it may be a tool to mitigate delirium,” said Shouri Lahiri, MD, director of the Neurosciences Critical Care Unit and Neurocritical Care Research at Cedars-Sinai and senior author of the study. “I think it is a major step toward a clinical trial of estrogen in human patients with UTIs.”

Lahiri said that delirium—a change in mental abilities that includes lack of awareness of one’s surroundings—is a common problem in older women with UTIs.

“Even as a medical student, you know that if an older woman comes to the hospital and she’s confused, one of the first things you check is whether the patient has a UTI,” Lahiri said.

In previous studies, Lahiri’s team found a connection between delirium and an immune-regulating protein called interleukin 6 (IL-6). Events such as lung injury or UTI cause IL-6 to travel through the blood to the brain, causing symptoms such as disorientation and confusion. Estrogen is a known suppressor of IL-6, so the investigators designed experiments to test its effects on UTI-induced delirium.

The researchers compared pre- and postmenopausal mice with UTIs and observed their behavior in several types of specialized environments. They found that the mice in which menopause had been induced exhibited symptoms of delirium, such as anxiousness and confusion, while the others did not.

When they treated the mice with estrogen, levels of IL-6 in the blood and delirium-like behavior were greatly reduced. The behavioral differences were not related to UTI severity, as bacterial levels in the urine weren’t markedly different between the two groups, Lahiri said.

The investigators also looked at the direct effects of estrogen on neurons, using what Lahiri called a “UTI in a dish.”

“We exposed individual neurons to an IL-6 inflammation cocktail to create UTI-like injury,” Lahiri said. “But when we added estrogen to the cocktail, it mitigated the injury. So, we showed that there are at least two ways that estrogen helps reduce symptoms of delirium. It reduces IL-6 levels in the blood and protects the neurons directly.” 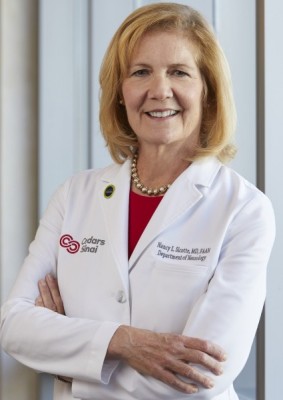 Questions remain about exactly how estrogen acts to protect neurons. And before conducting a clinical trial, researchers need to identify which patients with UTIs are most likely to experience delirium and at what point estrogen treatment might be most effective.

“Currently, it is common practice to treat UTI-induced delirium using antibiotics, even though there are no clinical trials that indicate this practice is effective and it is not supported by clinical practice guidelines,” said Nancy Sicotte, MD, chair of the Department of Neurology and the Women’s Guild Distinguished Chair in Neurology at Cedars-Sinai. “This work is an important step in determining whether modulating immune response via estrogen replacement or other means is a more effective treatment.”

The team is also working to understand the different effects of delirium on females versus males, which was not a topic of this study. Effective treatment of delirium could be of long-term importance, Lahiri said, because it is a known risk factor for long-term cognitive impairments, such as Alzheimer’s disease and related dementia.