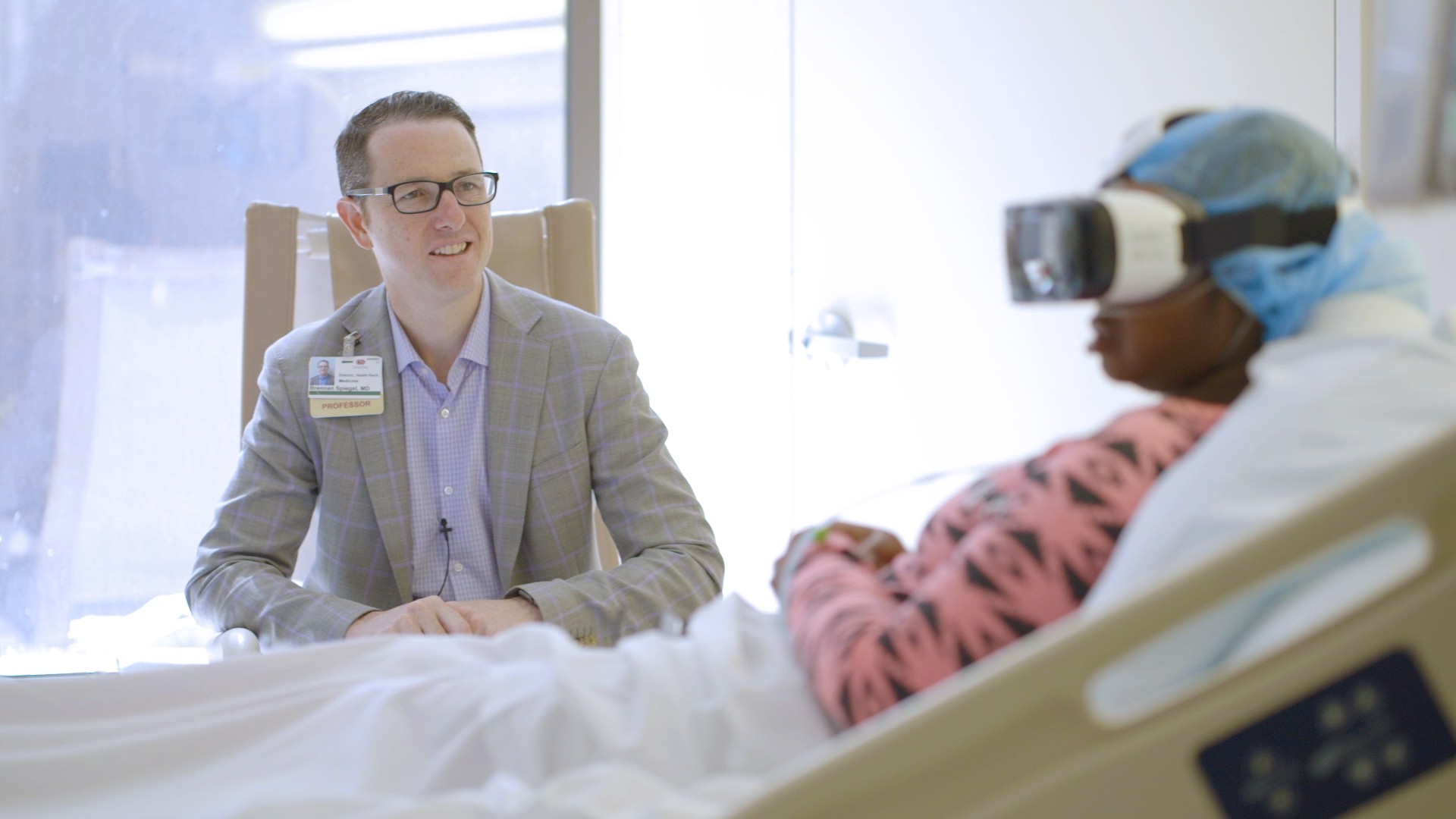 In the study, published online today by JMIR Mental Health, a sister publication of the Journal of Medical Internet Research, investigators examined 100 hospitalized patients who reported pain scores of greater than 3 on the Numeric Pain Rating Scale, which runs from 0 to 10.

Fifty patients received virtual reality therapy consisting of wearing VR goggles to watch calming video content such as helicopter rides over scenic portions of Iceland, or imagery of swimming in the ocean with whales. Those patients reported a 24 percent drop in pain scores after using the virtual reality goggles.

Another 50 patients viewed a standard, two-dimensional nature video, depicting relaxing scenes with a calming music audio track, on a close-proximity screen. Although those patients also experienced a reduction in pain, the decrease of 13.2 percent was less dramatic.

While it remains unknown exactly how VR works to reduce pain, Spiegel attributes the benefit to what he calls "immersive distraction." In other words, when the mind is deeply engaged in an immersive experience, it becomes difficult, if not impossible, to perceive other stimuli, including pain.

"We believe virtual reality hijacks the senses, but in a good way," Spiegel said. "It creates an immersive distraction that stops the mind from processing pain, offering a drug-free supplement to traditional pain management."

Because the VR intervention was only 15 minutes long and included only one visualization, it is possible that pain could rebound after completion of the therapy session, Spiegel said. Longer-term pain reduction might require sustained and repeated exposure to varied virtual reality content, he said.

"Based on this study, we're now conducting a larger trial to measure the impact of virtual reality on the use of pain medications, length of hospital stay and post-discharge satisfaction scores," Spiegel said.

Self: Why You Get Exercise Headaches When You Work Out

Self magazine recently interviewed Ilan Danan, MD, sports neurologist and pain management specialist at the Center for Sports Neurology and Pain Medicine at Cedars-Sinai Kerlan-Jobe Institute, about exercise-induced headaches. “These kinds of …
Read more from this release

A new study, published today in PLOS|ONE, the Public Library of Science, demonstrates the effectiveness of using virtual reality (VR) to combat pain for hospitalized patients. The study builds on previous work led by Brennan Spiegel, MD, MSHS, …
Read more from this release