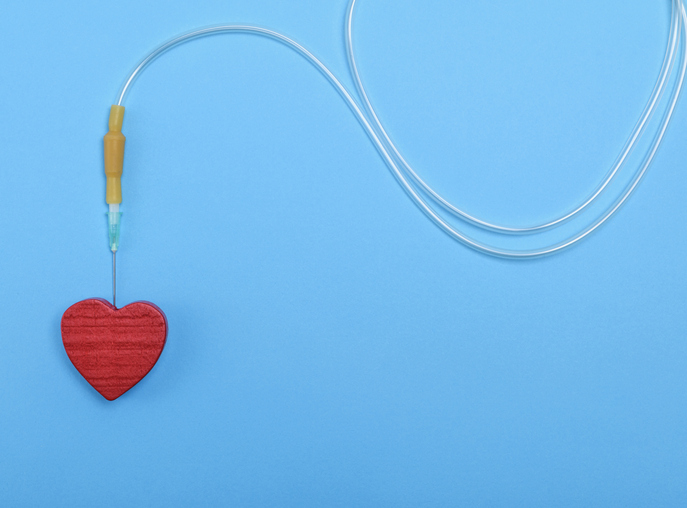 A new, catheter-based procedure and device are used to treat babies born with PDA, the most common heart birth defect. Image by Getty.
plastic catheter with needle and red heart on blue background, copy space

CBS News recently interviewed Evan Zahn, MD, director of the Guerin Family Congenital Heart Program in the Smidt Heart Institute, about a device recently approved by the FDA that is used to treat babies born with patent ductus arteriosus (PDA), the most common heart-related birth defect. The condition often is referred to colloquially as “a hole in the heart.”

“You put in this little plug, it takes 20 minutes,” Zahn told CBS News.

The CBS News story notes that Zahn led the clinical trial for the device, which is smaller than a pea. Zahn also developed the transcatheter procedure, which can be done on babies as small as two pounds. During the report, Zahn demonstrated how the device, developed by Abbott Laboratories, is used to treat some of the smallest prematurely born infants.

The PDA condition can be traced to how a baby’s heart develops in utero. Before birth, a fetus' blood does not need to go to its lungs to get oxygenated because the mother's own blood circulation supplies oxygen. Key to this process is the ductus arteriosus, a connection between the heart's two major arteries that allows the fetus' blood to bypass its lungs.

After birth, however, the baby needs to breathe on its own, so the patent ductus connection naturally closes in most babies. When the hole does not close, the condition can lead to difficulty with breathing and feeding, brain hemorrhages, heart failure and even death.

Medication therapy is successful in less than 60 percent of newborns with PDA and can cause side effects such as kidney failure and bleeding, Zahn said. Open-heart surgery has its own short-term risks, and recent evidence suggests that long-term outcomes after surgery for preemies with PDA may be worse than previously thought.

The new procedure and the device have changed those prospects, giving physicians who specialize in congenital heart defects new, nonsurgical treatment options.