John Wharton put his first set of hips through the wringer. But even after a semipro football career spent slamming his body full force into other players, 30 seemed too young to hurt so much.

Despite a diagnosis, he reasoned it was too soon for arthritis. For 15 years, he tolerated the debilitating pain that kept him home from parties and reduced him to relying on others at work. He got by on yoga breathing and borrowed pain pills, and eventually he qualified for hip-replacement surgery at the Cedars-Sinai Kerlan-Jobe Institute.

Finally, a path out of suffering opened. He just had to choose to take it.

Wharton, who is now 46, grew up in Brooklyn, where he and his brothers trained in karate and leapt between four-story rooftops for thrills. He played middle linebacker and fullback on his high school’s football team. Late at night, after team practice, he trained alone to get quicker. A semipro coach noticed and recruited him to the Brooklyn Chargers. He played for a few years—about as long as anyone can in a sport that’s so rough on the body.

"When you’re young, you like doing stuff that destroys you," says Wharton, who also crashed six motorcycles in his younger years.

Post-football, he launched into a full-time job as a contractor. He earned a plumbing license and got to know basement boiler rooms across the five New York City boroughs. He started his own firm and bought his first home.

But after a family tragedy, Wharton gained 100 pounds, stressing his already hulking frame. He developed pain and stiffness in his left leg, and at 30 he was diagnosed with bone spurs caused by osteoarthritis, the inflammation of the joint when cartilage wears down.

Wharton’s life should have been perfect: His business was thriving, and he and his family had just moved into an eight-bedroom dream home in Atlanta. In reality, his arthritis had worsened. After work, he’d park in his garage and just sit there mustering the strength to hurl himself out of his sports car and scoot up the stairs.

In 2016, he told his daughter he felt like he was losing the use of his legs entirely. She encouraged him to see a doctor.

He stretched, self-medicated and lost weight, but the pain persisted and spread to his right leg. By the time he was 40, he often abandoned plans because it took him too long to get his shoes on. His relationships deteriorated. The arthritis had whittled him down to a recluse.

"Nobody really knew what I was going through," Wharton says. "Nobody understands when you’re young and you feel like you have an 'old man' disease. I felt like a complete loser."

People think of arthritis as something that only affects older people, but the average age of people whose quality of life is compromised by this condition is younger than it used to be."
– Dr. Jeffrey Zarin

ACCEPTANCE AND A NEW PATH

Finally, in 2020, Wharton ended up in an emergency room in Baltimore after being in too much pain to board a flight home. There, physicians told him his movement was so limited and his pain so great that he qualified for hip replacements.

"I'd been suffering and moping around for years, and I guess I didn’t want to accept what I needed," he says. "I finally decided to get it together."

Around that time, he met Shyla Darensbourg at a friend’s Christmas party. They talked about their children, and he was struck by her nurturing and warm nature. After a whirlwind romance, they wed.

Darensbourg was invested in his health and insisted he consult with experts at Cedars-Sinai, where she was born and where doctors had successfully treated her cancer. Wharton was determined to find a sports injury specialist closer to home, even after he’d been discouraged by rote conversations with local doctors in staid clinics.

To appease his bride, he flew across the country from his home in Atlanta for an appointment at Cedars-Sinai Kerlan-Jobe. In the bright Santa Monica clinic, Wharton immediately felt at home. Jeffrey Zarin, MD, projected a calm confidence and—most importantly—asked Wharton a lot of questions.

Zarin says he needs to get to know his patients: It’s crucial he understands their lives so he can help them make decisions. He adds, "We make sure to decompress the mystery of the surgery and the frightening aspects."

Joint replacement surgeries are performed exclusively to improve quality of life—to take away people’s pain so they can sit, walk and sleep again. Wharton was a young candidate, but his life was so limited that hip replacement was his only option.

"People think of arthritis as something that only affects older people, but the average age of people whose quality of life is compromised by this condition is younger than it used to be," Zarin says. "I see patients from 40 to 90."

Wharton was impressed with Zarin’s expertise in robotic-assisted surgery, which allows him to place implants precisely where they need to go in each patient’s body. The two decided to move forward with dual hip replacement in two surgeries that would be spaced out enough to support Wharton’s recovery.

In March 2021, on the day of his first surgery that would replace his left hip, Wharton was nervous. But the operating room team played music, which took the edge off. He went under and awoke anew.

"As soon as I woke up, I didn’t feel that pain anymore," he says. "It was almost surreal. That's all I had to do was a two-hour surgery, and just like that I was back."

Two months after Zarin performed the second surgery to replace his right hip, Wharton was healed.

Most patients can expect to resume their normal activities six to eight weeks after a hip replacement. But the mind is more reluctant than the flesh.

"Part of the recovery is retraining your brain to think that things are stable and better, and the longer you’re disabled, the longer it can take for you to feel normal," Zarin says.

Month by month, Wharton says, he gingerly shed his limitations. Now at hot yoga, he can stretch his legs the length of the mat. He and Darensbourg recently moved from Atlanta to Houston, where they spend weekends mountain biking and kayaking—low-impact activities endorsed by Zarin to keep joints conditioned. This year, Wharton hopes his construction business, Mr. Handy, will take on even more projects now that he can do much of the work himself.

But the most life-affirming abilities are the everyday ones, Wharton says, like tying his shoes and sitting comfortably in his truck—normal stuff he’s grateful to have back and eager to keep.

"My last hips I had, I downplayed them," he says. "I’m not going to beat these hips up. I know what it’s like not to have the use of your legs, and I value these."

John Wharton traveled cross-country for hip-replacement surgery at Cedars-Sinai, which is ranked #3 in the nation for Orthopaedics according to U.S. News & World Report’s “Best Hospitals 2021-22” analysis. But Angelenos are never far from Cedars-Sinai’s trusted orthopaedics experts at 11 locations throughout the city, from Thousand Oaks to Anaheim.

Jeffrey Zarin, MD, earned his medical degree from Stanford University School of Medicine and completed an internship, residency and fellowship at Harvard University. He moved to Los Angeles from Boston in 2019 and joined Cedars-Sinai in 2021. He and his wife, a urogynecologist, live in Santa Monica with their 14-year-old twins, who love the beach, biking and skiing. 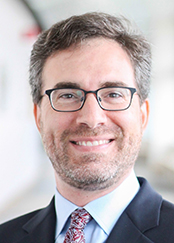