An Inclusive Guide to Puberty and Periods

Puberty ushers in all kinds of changes. For kids born with ovaries and uteruses, periods are part of the package—and their parents inevitably grapple with how and when to broach the subject with them.

The shifts in societal norms and perspectives that occur from one generation to the next can also make the subject feel a bit more daunting, whether the angle is as simple as discussing which period products to use, or as complex and nuanced as gender identity.

As advocacy for LGBTQ+ rights has led to some hard-won victories, and mainstream awareness of the full spectrum of gender identities is slowly expanding, the conversation around periods and puberty is also evolving.

So—how, and when, to start supporting your child in the best possible ways?

Pediatrician Dr. Paria Hassouri, who runs the Pediatric and Adolescent Gender Wellness Clinic at Cedars-Sinai, has a number of recommendations for how to talk about periods in a way that is straightforward, supportive, and, most importantly, inclusive. 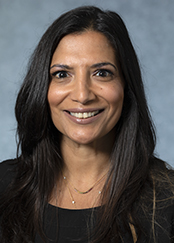 When to start talking about periods

Dr. Hassouri's recommendation? "Before it starts happening." But, she notes, this can come a lot sooner than parents may realize.

On average, kids born with ovaries have their first period around 11 to 12 years old, but it can start as early as 9 years old.

"It's important to have these conversations pretty early," says Dr. Hassouri. "Obviously kids are smart, and they often have access to the internet at an early age. They're talking to their friends, they're observing their older relatives. As a parent, when you initiate these conversations early on, you're telling your kid, 'We can talk about anything, and you don't have to rely on outside sources to get your questions answered.'"

How to talk about periods (with inclusivity in mind)

"When I'm talking about periods, I'll usually say 'people who get periods' or 'people who menstruate' or 'people with uteruses' rather than describing it like 'girls get their period' or 'boys have other changes,'" she explains.

"For trans boys (boys who were assigned female at birth), trans men, non-binary people, if you use language that doesn't make a period sound like it's feminine, then they can have a lot less dysphoria associated with getting a period. And using language that's more inclusive is not going to offend the majority of people who get periods."

Some parents may find kid-friendly books helpful for guiding the discussion. Dr. Hassouri notes that a recent title published by the American Academy of Pediatrics—You-ology: A Puberty Guide for Every Body—is a great example of one that offers an inclusive approach, encompassing nonbinary and trans identities, along with cisgender identities.

Read: When Should an Adolescent Girl See a Gynecologist?

Navigating sources of potential distress around having a period

How exactly should parents approach the topic of periods when their child is distressed about having one?

"For the child who does not want to get a period, you really want to ask further questions to see what it is about their period that is bothering them," Dr. Hassouri recommends. "For example, are they afraid of leaking in a social situation? Are they experiencing unusually heavy flow? Are they getting bad cramps? If we can treat their cramps appropriately, then will that alleviate their discomfort? We want to make sure we address all of the above first, and then if appropriate, considering medical intervention for stopping periods."

It's important, says Dr. Hassouri, to distinguish whether any distress is a general discomfort around the changes occurring with the body, or if getting a period is causing distress due to gender identity.

"Try to have these conversations, observe your child, and ask yourself, 'Is this a discomfort thing, or truly a distressing thing? Is it potentially related to identity,' or is it, 'I'm 9, 10, 11, 12, and I don't want to get my period?' And then approach it from that angle."

A variation of the menstrual pad has been around for centuries. The modern tampon was invented in the 1930s and its usage became increasingly more commonplace. While menstrual cups were invented around the same time as tampons, for various reasons they were met with a much slower rate of mainstream acceptance—until recently.

Within these options, Dr. Hassouri notes that for trans and non-binary kids and tweens in particular, something as simple as how the product is packaged can make a big difference.

"Very simple things like packaging becoming more neutral, not pink, not using words like 'woman' or 'diva'—things like that—a lot of times finding products where the packaging is more gender neutral alleviates distress," she says. "It can be as simple as that."

And Dr. Hassouri notes that there's another option that has grown popular and proven convenient, environmentally friendly and inclusive: period underwear.

"It is being used with increasing frequency in conjunction with pads and tampons by youth who are worried about soaking through and leaking," she says. Also, adds Dr. Hassouri, wearing period underwear can relieve anxiety over getting one's first period while at school or in another situation away from home.

"There are now many companies making period underwear that look like boxers or briefs," she adds, "which tends to cause less discomfort for trans boys and nonbinary people for whom using a pad may otherwise cause dysphoria. Wearing a boxer brief may be better for them."

When it comes to wanting to minimize or even stop menstruation, there are a handful of medical options available: oral contraceptives, IUDs and puberty blockers.

"It's completely safe for the majority of people, as long as they're not otherwise at risk in taking hormone medication. And that's one way to stop periods," she says.

If the term "birth control pill" or "oral contraceptive" may be distressing to somebody, she prefers to refer to it as a "continuous low-dose hormone pill."

Another option is a progestin-based intrauterine device, popularly referred to as an IUD. An advantage to this option, Dr. Hassouri notes, is that, once placed, it is effective for six to seven years.

"For most people, within six months, an IUD will either stop their period, or they'll just have light spotting," she explains. However, placing an IUD in younger patients also requires additional care.

"The placement of it can be really uncomfortable and distressing for young patients, so finding a provider who is open to placing it while the patient is under light sedation is key," she says.

A third option for lightening or minimizing periods is the use of puberty blockers. But she notes that this medication option is only to be used in very specific situations, such as when also addressing more comprehensive issues surrounding gender identity. A puberty blocker safely and reversibly pauses puberty, allowing time for gender identity to be further explored and solidified in a trans or gender-diverse youth.

"Puberty blockers generally will stop a period," she says. "They're not used in order to just stop a period—that's definitely not a good option for that. But, if someone is looking to put a pause on puberty for other critical reasons, it has that added benefit."

When to see a doctor—and which kind of doctor is best?

After a child gets their period, can their pediatrician address any concerns or developments that arise? Or is it better to consult a specialist like an OB-GYN?

When it comes to the use of puberty blockers, however, Dr. Hassouri notes that this is when specialized care comes into play. When opting to go this route, "then we're getting more into the area of trans care," she explains. "That is something that most general pediatricians don't do. This is part of the specialized and comprehensive work we do at Cedars-Sinai's Pediatric and Adolescent Gender Wellness Clinic."

The clinic helps youth and their parents by providing resources and support, including social support—especially for younger patients who have not reached puberty but feel gender fluid.

Overall, Dr. Hassouri says it ultimately comes down to "normalizing puberty in general" and "normalizing all experiences."