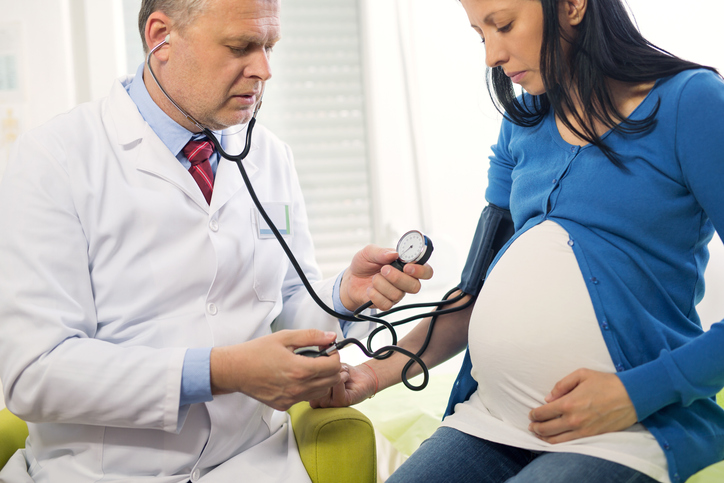 A Cedars-Sinai team has developed a test to help diagnose preeclamsia, a dangerous condition that affects pregnant women. Photo by Getty.
Doctor measures the pressure of a pregnant woman

As part of an end-of-the-decade series about health advances of the past 10 years,The New York Times recently interviewed Ananth Karumanchi, MD, Medallion Chair in Vascular Biology and Professor of Medicine at Cedars-Sinai, for a story about the progress made in fertility medicine during the 2010s.

One of the advances -- along with improved in vitro fertilization techniques, uterus transplants and better understanding of male infertility -- is the progress made in understanding preeclampsia. Preeclampsia is the development of high blood pressure, swelling or high levels of albumin in the urine between the 20th week of pregnancy and the end of the first week after delivery. About 5% of pregnant women develop preeclampsia. Eclampsia is the development of convulsive seizures or coma without other causes during that same time frame.

As journalist Julia Calderone wrote in The New York Times article, "While the textbook signs and symptoms of pre-eclampsia have been well understood — high blood pressure, protein in the urine, swelling, headache, trouble breathing and more — scientists still don’t understand what causes the condition, and diagnosing it and predicting those who will develop it are challenging. Similarly, the most effective treatment for pre-eclampsia is also the least satisfying one — delivery."

But thanks to research progress made by Karumanchi and other experts at Cedars-Sinai, doctors have a better grasp on understanding how the condition progresses. And, their research led to the development of the first blood test, which can accurately diagnose the condition in women with preeclampsia.

While the test has yet to be approved in the United States, Karumanchi said that its development could lead to new therapies for preeclampsia within the next decade.

The New York Times also details new research that offers clues on how women who are high risk for the condition might avoid it. For example, a double-blind, placebo-controlled trial published in 2017 found that taking 150 milligrams of aspirin daily from 11 to 14 weeks of pregnancy through the 36th week could reduce the chances of developing pre-eclampsia. However, because high doses of aspirin also can be associated with other risks such as pregnancy loss or certain birth defects, women should consult their physicians before starting an aspirin regimen.

Click here to read the complete article from The New York Times.

Read more on the Cedars-Sinai Blog: What You Need to Know About Your Fertility