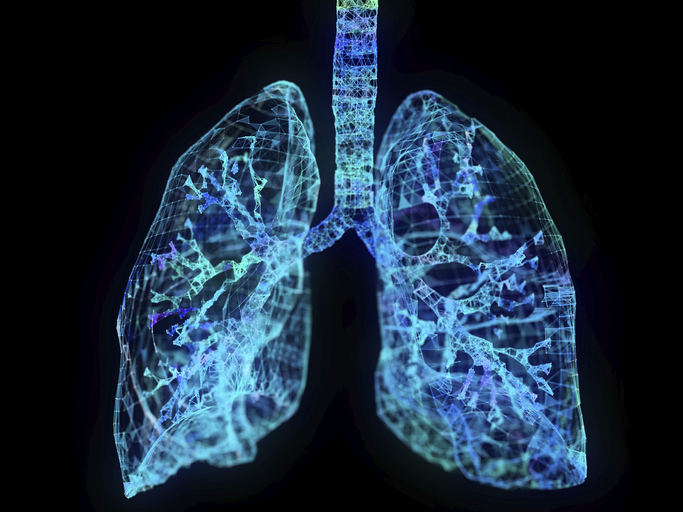 New research shows how a protein may affect the growth of a deadly lung disease. Illustration by Getty.

A protein associated with cancer growth appears to drive the deadly lung disease known as idiopathic pulmonary fibrosis, according to new research from Cedars-Sinai. The discovery, made in laboratory mice and human tissue samples, may have implications for treating the disease using existing anti-cancer therapies that inhibit the protein PD-L1.

Idiopathic pulmonary fibrosis is a chronic, progressive lung condition of unknown cause that affects more than 100,000 people in the U.S. It consists of fibrosis—a buildup of fibrous scar tissue—that eventually robs the lungs of the ability to transport oxygen to the bloodstream. Although the disease progresses at variable rates, most patients die within five years after being diagnosed, according to the National Institutes of Health.

"At present, there is no known cure for this devastating condition," said Paul Noble, MD, professor of Medicine and chair of the Department of Medicine, director of the Women's Guild Lung Institute and the Vera and Paul Guerin Family Distinguished Chair in Pulmonary Medicine at Cedars-Sinai. "Current FDA- approved drugs only slow the fibrosis in certain individuals or treat some symptoms. This study opens a pathway for developing a treatment for idiopathic pulmonary fibrosis."

Noble and Dianhua Jiang, MD, PhD, professor of Medicine at Cedars-Sinai, were co-corresponding authors of the research published in the journal JCI Insight.

From left, a chest CT scan of a patient with idiopathic pulmonary fibrosis and lung biopsies displaying the typical disease pattern and scarring. Images by Cedars-Sinai.

In experiments with laboraory mice, the team then demonstrated that introduction of normal fibroblasts did not result in developing pulmonary fibrosis and that the severity of disease could be reduced by using genetic and antibody techniques to inhibit PD-L1.

"Cumulatively, these results identify PD-L1 as a driver of fibroblast invasion in idiopathic pulmonary fibrosis and support PD-L1 as a potential therapeutic target for the condition," Jiang said.

Based on the findings, the research team is designing a proposal for a Phase I clinical trial involving the use of a PD-L1-inhibiting drug against this disease. The trial would evaluate the safety of the drug in patients. If found to be safe, the drug could then be tested in later trials to gauge its effectiveness and further test its safety.

Currently, there are several PD-L1-inhibiting drugs approved by the FDA for treating cancer. Some cancer cells thwart attack by the immune system by secreting PD-L1 in a process similar to the one described in the new study. "Our proposal is to use one of these FDA-approved drugs in a clinical trial for idiopathic pulmonary fibrosis," Noble said.

Cedars-Sinai is an internationally recognized leader in lung fibrosis research. Noble leads a scientific team that was awarded $12 million last year by the National Institutes of Health to investigate idiopathic pulmonary fibrosis and chronic lung allograft dysfunction. The JCI Insight study, published in the March 21 issue, was partially funded by that grant.