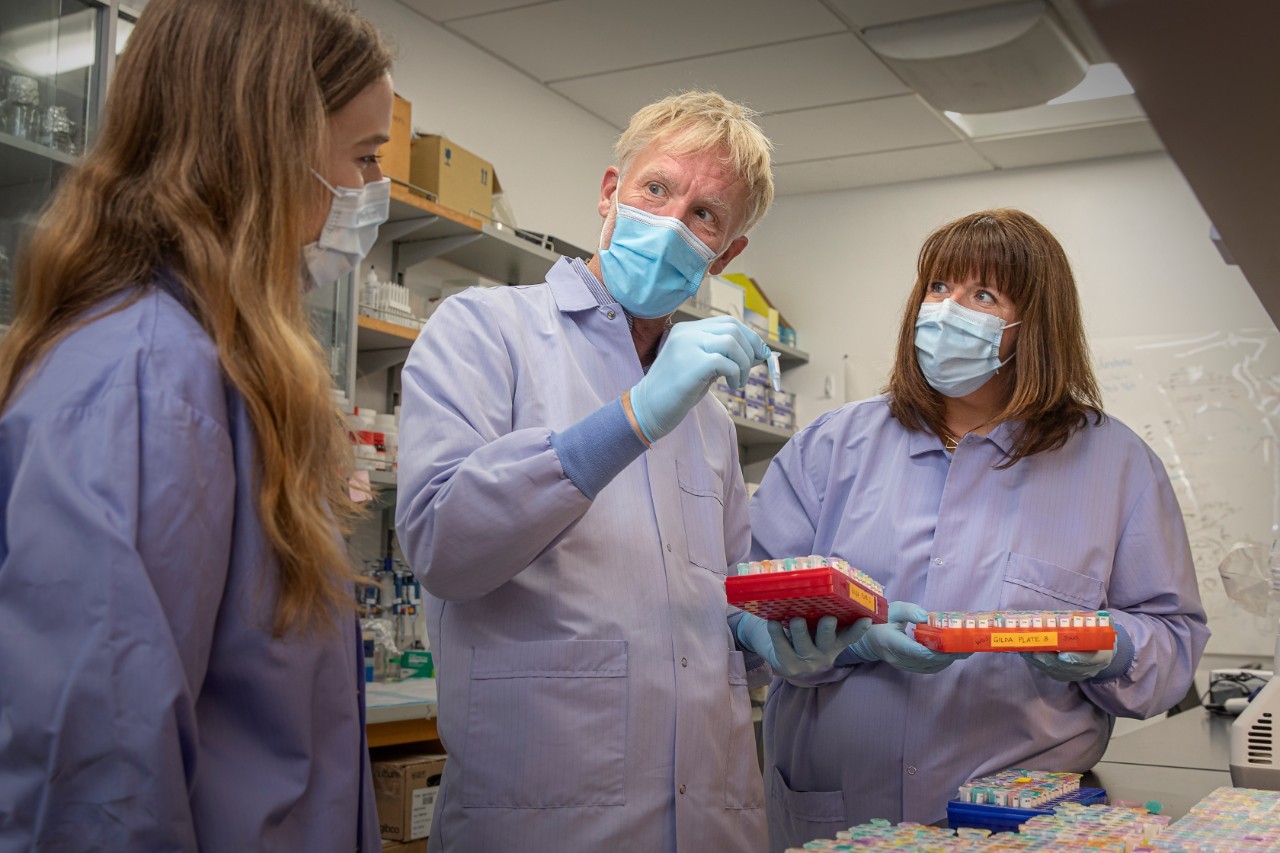 Simon Gayther, PhD, professor of Biomedical Sciences, and Michelle Jones, PhD, a research scientist in the Center for Bioinformatics and Functional Genomics, led the efforts on two new studies that help improve the understanding of ovarian cancer.

Two new discoveries led by Cedars-Sinai Cancer investigators help improve the understanding of what drives the development of ovarian cancer and why some women’s tumors do not respond to therapy.

“Understanding the relationship between molecular profiles and clinical presentation of ovarian cancer not only can help guide the development of personalized therapeutic approaches, but can also help us identify women who are at the highest risk so we can intervene before the cancer even develops,” said Simon Gayther, PhD, professor of Biomedical Sciences, director of the Center for Bioinformatics and Functional Genomics at Cedars-Sinai and senior author of both studies. 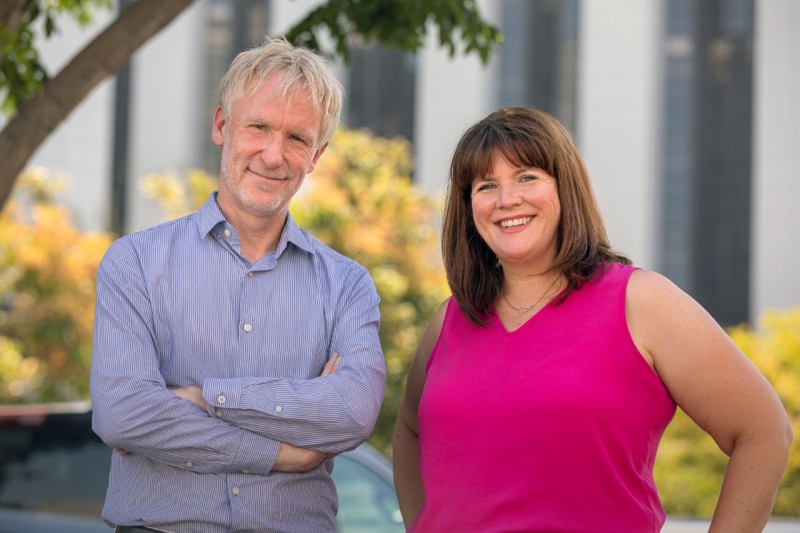 The first study, published today in the Journal of the National Cancer Institute, identified four new regions of the human genome that harbor genetic variants or mutations that put women at an increased risk of developing epithelial ovarian cancer, the most common type of ovarian cancer.

“When it comes to ovarian cancer, prevention is how we’re really going to impact mortality,” said Michelle Jones, PhD, a research scientist in the Center for Bioinformatics and Functional Genomics and corresponding author of the study. “This study helps us accurately identify women who carry cancer-causing mutations, which can help physicians develop preventive strategies for these women.”

To pinpoint the mutations, the team of investigators used new methods to analyze the structural variation of the genome, which is made up of 23 pairs of chromosomes where an individual’s genetic code is stored.

While most research focuses on analyzing the change in the sequence of the gene, the team looked at the number of copies of the gene an individual has—known as a copy number variant.

When the genome gets copied, structural variation can occur, and stretches of the genome can get deleted, duplicated or rearranged to another position. These changes can lead to diseases, like cancer.

The study, which is the largest to date to evaluate the contribution of copy number variants to ovarian cancer risk, will likely lead to more accurate genetic testing for women. 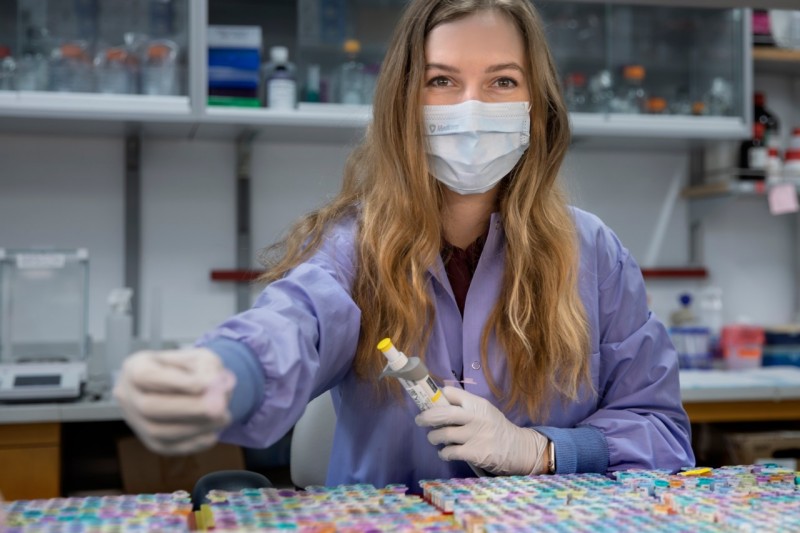 The second study, published in the Journal of Experimental & Clinical Cancer Research, gives investigators a deeper understanding as to how ovarian tumors develop resistance to chemotherapy, which occurs in about 80% of high-grade serous ovarian cancer patients and ultimately leads to their succumbing to the disease.

Previously, researchers believed that ovarian tumors evolve after they are exposed to chemotherapy, and that they change their gene expression to adapt and survive through the treatment.

However, using whole genome sequencing, they found for the first time that this is not the case. Instead, it seems more likely that most high-grade serous ovarian tumors have the capacity to survive chemotherapy from a very early stage, said Jones, who is also the co-first author on this study.

“This study has changed our understanding of how tumors respond to chemotherapy,” Jones said. “Previously it was thought that we could probably find a way to treat chemo-resistant tumors with other drugs after they have been treated with the standard therapy, but this study suggests that may not be the best approach.”

“By improving our understanding as to how tumors doing survive chemotherapy, and even continue growing throughout treatment, as well as finding vulnerabilities in the tumors, will give us an opportunity to design better drugs and save the lives of women with ovarian cancer,” added Gayther.

As researchers at Cedars-Sinai Cancer explore how to more accurately identify women who carry cancer-causing mutations, clinicians are simultaneously working to monitor, and rapidly treat as needed, BRCA-positive patients.

Under the leadership of B.J. Rimel, MD, a gynecological oncologist and medical director of the Cedars-Sinai Cancer Clinical Trials Office, Cedars-Sinai recently launched a high-risk BRCA clinic—known as a previvor clinic—for BRCA1 and 2 carriers at high-risk for developing ovarian cancer.

The goal, Rimel says, is to arm BRCA-positive patients with regular screening and risk-reducing prevention strategies—in a one-stop clinic setting.

“Our multidisciplinary care team, comprised of a reproductive and infertility physician, a gynecologist oncologist and a genetic counselor, spends time with each high-risk patient during the clinic visit,” said Rimel. “We provide transvaginal screening onsite, review results from relevant lab work and ensure questions are addressed in real-time.”

“Alterations in genes such as BRCA in either the cancer or the patient’s germline have profound implications for treatment and prevention,” said Dan Theodorescu, MD, PhD, director of Cedars-Sinai Cancer and the PHASE ONE Foundation Distinguished Chair and professor of Surgery and Pathology and Laboratory Medicine. “As our research propels, so do our translational findings that impact and improve patient lives.”