Like a lot of young children, from the time she was a year old, Cassidy Clapp was plagued by one ear infection after another.

Usually, an ear infection diagnosis meant Cassidy would undergo a round of antibiotics. But when her Orange County pediatrician noticed the fluid wasn’t draining out of Cassidy’s ear, he recommended inserting tubes into the toddler’s ears.

“I think her hearing was 70% affected, by the fluid buildup” said Cassidy’s mother, Brittany Clapp. ”She always sounded like she was underwater and she didn’t have a lot of speech.”

Brittany and her husband, Charlie, tried as many natural remedies as they could to clear Cassidy’s ears--including acupuncture--but nothing worked. Still, the family was hesitant to have Cassidy undergo surgical anesthesia at such a young age.

“It just seemed like a lot of risk and my mom had bad reactions to anesthesia and I didn’t want Cassidy to go through that,” Brittany said.

After numerous calls and doctor visits, the parents made their way to Gene Liu, MD, at Cedars-Sinai Guerin Children's. Liu, an ear, nose and throat specialist 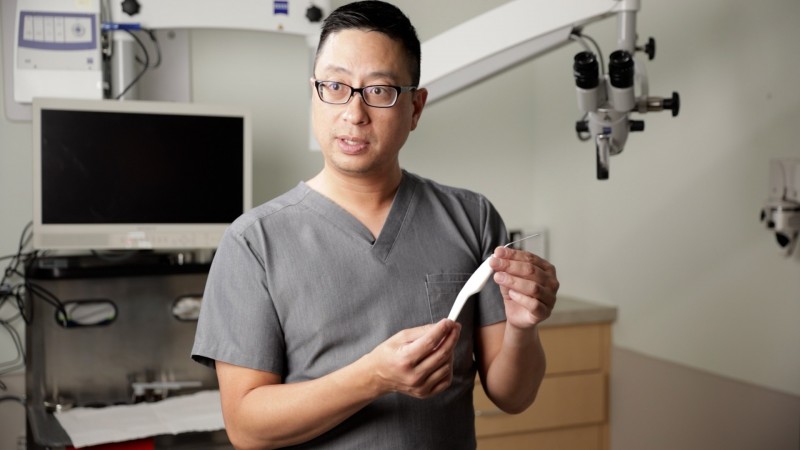 “It can muffle the hearing and delay speech and language development,” Liu said.

Liu routinely places ear tubes in young children’s ears. Traditionally, the placement is done under anesthesia in an operating room. Surgeons  poke a hole in the eardrum, drain all the excess fluid and insert the small plastic tube to lessen the pressure and give the fluid a different pathway out of the ear.

Despite the fact that the actual procedure is quick, surgery is often a full-day ordeal for the young child, with no eating or drinking, an early check-in, post-anesthesia grogginess and, often, nausea.

A device called the Hummingbird is a game changer for parents, Liu said. “The entire process, by the time we get the child into the room, into position, clean out the ears and put in the tubes is four to five minutes,” said Liu.

The best part, according to Liu: The child is feeling and hearing better within minutes.

The Hummingbird is shaped like its namesake bird and is a single-pass device, meaning that when the needle enters the ear canal, the tube is automatically inserted.

Although the Hummingbird was approved two years ago, the pandemic prevented many parents from learning about this new option. Cedars-Sinai was one of the initial eight institutions across the country involved in clinical trials of the Hummingbird and now the Food and Drug Administration is looking at expanding the approval to older children as well.

Liu performed a Hummingbird procedure on Cassidy in April.

“They wrapped her up kind of like an extreme swaddle and I was holding her hand and he went in and super-fast one ear was done and then the other and we’re done,” mom Brittany Clapp said. “She cried for about a minute and then was high-fiving Dr. Liu as we left the office.”

The change in Cassidy was immediate. “She heard birds chirping for the first time and was so excited,” Brittany said.

But the best part? When her daughter said, “Mama.”

Read more on the Cedars-Sinai Blog:  Covid and Kids: What You Need to Know

Eleven-year-old Ayden Dzuben settled into a bright yellow room at Cedars-Sinai Guerin Children's this week, the first patient to enter the new pediatric inpatient facility after years of planning."Oh my gosh, I like this a lot," said Ayden, who was …
Read more

Hyperactivation of the Immune System May Cause Post-COVID Syndromes

Investigators at Cedars-Sinai have proposed a theory for how SARS-CoV-2, the virus that causes COVID-19, infects the body. Their hypothesis, published in Frontiers in Immunology, could explain why some people still have symptoms long after the …
Read more

A Cedars-Sinai physician-scientist who has made seminal discoveries related to a syndrome that some children develop after becoming sick with COVID-19 is the winner of this year's Cedars-Sinai Prize for Research in Scientific Medicine (PRISM).Moshe …
Read more