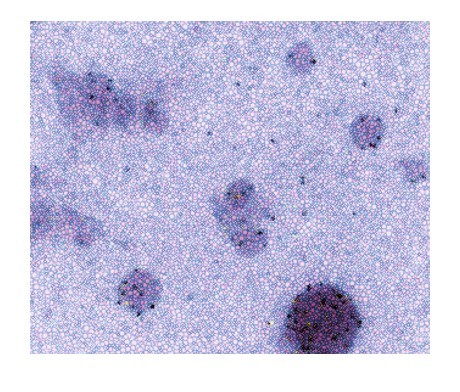 In this photo taken with an electron microscope, the spheres are exosomes and the black dots are gold labels. Photo courtesy of Mark A. Aminzadeh, MD.

Cell-derived exosomes are effective in treating disease when mixed with the dominant protein in breast milk and given orally, a new Smidt Heart Institute study of laboratory mice shows. The findings, published in the peer-reviewed Journal of Extracellular Vesicles, could help develop new oral medications for treating patients with muscular dystrophy and heart failure.

The study builds on more than a decade of research led by Eduardo Marbán, MD, PhD, executive director of the Smidt Heart Institute and Cedars-Sinai professor of Cardiology. The research has focused on human cardiosphere-derived cells (CDCs) and a type of extracellular vesicle, called an exosome, that is secreted by those cells and travels throughout the body. Exosomes contain various biomolecules.

"When we started our first human trial in 2009, we were injecting the cells into the hearts of patients, and we thought the cells themselves were the therapeutic answer," Marbán said. "Now, we know it's really the exosomes that do the heavy lifting, and our recent work shows that they could be just as effective when administered orally."

Since that first study concluded in 2010, Marbán has led several studies that have each produced new insights and new methods of delivering the cells to patients and an expansion of the type of patients the cells could potentially help.

"The work by Dr. Marban and his team highlight the ingenuity our investigators bring to addressing human disease," said Jeffrey A. Golden, MD, Cedars-Sinai's Vice Dean for Research and Graduate Education. "By building on his efforts to develop novel therapeutics for cardiovascular disease, he has found an exciting and novel path to treating another challenging clinical disorder, muscular dystrophy, and in so doing provided the groundwork to expand this strategy to other disorders."

Muscular dystrophy is a group of diseases caused by abnormal genes (mutations) that interfere with the production of proteins needed to form and maintain healthy muscle – including the heart muscle.

In the most recent study, exosomes secreted by CDCs were mixed with casein, the major protein found in the milk of most mammals. The casein-coated exosomes were then fed to laboratory mice that had muscular dystrophy.

Casein is the basis of cheese and often is an ingredient in food products. Decades of medical research have shown that babies who are breastfed might have reduced risk for certain allergic diseases, asthma, obesity and Type 2 diabetes. Casein-rich breast milk, which contains many natural exosomes, also may help improve an infant's cognitive development.

Results showed that the mice with muscular dystrophy who were fed the CDC-derived exosomes experienced improved heart function as well as improved mobility and exercise capacity and that giving the exosomes orally distributed them throughout the body. The effects were enhanced by mixing the exosomes with casein.

"Especially for the patient population we are now targeting, patients with muscular dystrophy, the results are promising," Marbán said. "If we can prolong the amount of time before muscular dystrophy patients have to use a wheelchair, that would be a huge quality-of-life improvement."