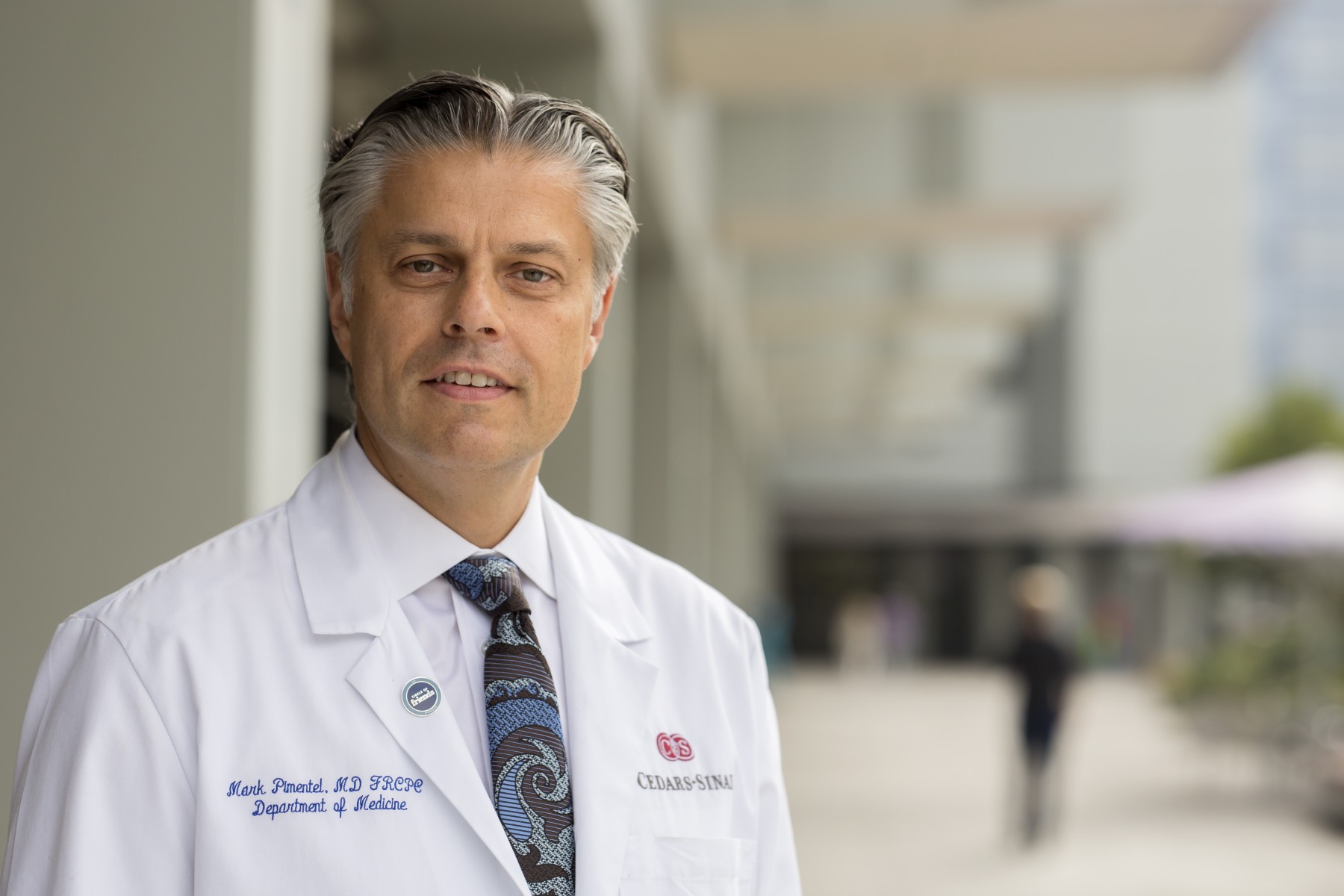 Mark Pimentel, MD, is director of the Medically Associated Science and Technology Program at Cedars-Sinai. Photo by Cedars-Sinai.

Los Angeles - May 14, 2015 – Millions of people afflicted by irritable bowel syndrome can now be diagnosed quickly and accurately with two simple blood tests developed by a Cedars-Sinai gastroenterologist.

The tests, created by Mark Pimentel, MD, director of the GI Motility Program and Laboratory, confirm when a patient has developed IBS because of food poisoning, a major cause of the disorder.

Toxins produced by bacteria, such as salmonella, can severely harm the digestive system by damaging nerves critical to healthy gut function. The new blood tests identify the presence and amount of specific antibodies reacting to the toxins.

"Having an early diagnosis means patients can avoid years of invasive tests and visits to specialists that often leave them with more questions than answers," he said. "With these new blood tests, many patients will now be able to proceed right to therapy for their condition."

IBS is the most common gastroenterological disorder in the United States, affecting nearly 40 million people. An estimated 10 percent of the world’s population suffers from the condition.

The disorder, nearly impossible to diagnose until now, is characterized by a cluster of confounding symptoms that include chronic bloating, abdominal pain, gas, and bouts of relentless diarrhea, constipation, or both. Fatigue and the stress of trying to plan one’s life around visits to the bathroom can be debilitating.

A multicenter study validating the accuracy of the new blood tests, "Development and Validation of a Biomarker for Diarrhea-Predominant Irritable Bowel Syndrome in Human Subjects," was published this week in the journal PLOS ONE. Pimentel will also present the research on Sunday, May 17th, at Digestive Disease Week 2015 in Washington, D.C.

Pimentel and fellow researchers studied nearly 3,000 people, comparing IBS patients to those diagnosed with inflammatory bowel disease, celiac disease and those with no GI disease. The blood tests identified the two antibodies associated with IBS -- anti-Cdtb and anti-vinculin -- with greater than 90 percent certainty.

The tests are marketed under the name IBSchek™ and are produced by Commonwealth Laboratories Inc., in Salem, Massachusetts.

"Most IBS patients have been told at one time or another that the disease was psychological, all in their head," said Pimentel. "The fact that we can now confirm the disease through their blood, not their head, is going to end a lot of the emotional suffering I have seen these patients endure."

For more information on IBS and the new blood test for the disorder, watch this video: First Ever Blood Test for IBS.

Cedars-Sinai has entered into an exclusive license agreement with Commonwealth Laboratories for several patent applications covering the blood tests, developed by Pimentel to detect both anti-CdtB and anti-vinculin antibodies in the diagnosis of irritable bowel syndrome and inflammatory bowel disease.