Memorial Day: Orthopaedic Surgeon Reflects on His Tour of Duty 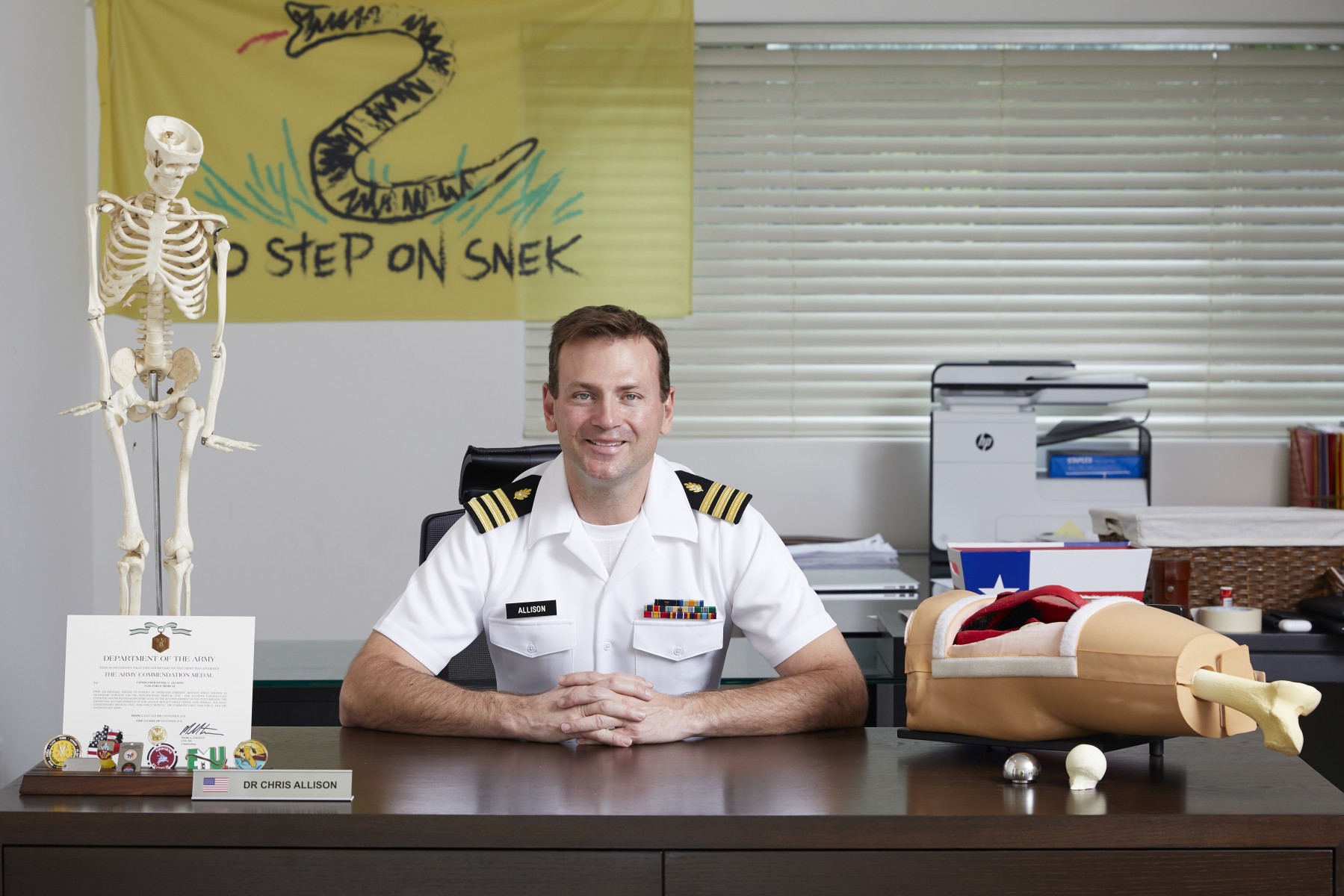 It was his second day of deployment when Allison got a taste of the reality of war. An explosion rocked the field hospital where Allison, 43, was serving, and he and his colleagues—thinking that they were under fire—dashed to their bunkers.

They soon were alerted that the blast was from a nearby improvised explosive device, or IED, rather than from enemy troops. All the same, "It was a quick way to realize the nature of what I was getting into," said Allison.

Allison and other medical staffers then hustled back to treat an Iraqi service member wounded by the IED.

It turned out that most of Allison's six-month tour of duty in Iraq, which ended in December, was far from high drama. Although he often was "on pins and needles" waiting to treat injured troops, Allison said, "We never had that had high-volume, mass casualty event that we were trained for—fortunately."

Yet Allison said his experience in Iraq and throughout his time in the Navy Reserves—he is roughly midway into a seven-year commitment—has profoundly affected him.

Allison was born in London, and spent part of his early childhood in Iran, where his father designed oil-drilling equipment. When the Iranian Revolution came in 1979, the family fled, and eventually settled in Texas.

Allison attended Southern Methodist University in Dallas, where he played on the tennis team, and received his medical degree from the Baylor College of Medicine in Houston. He came to Los Angeles for his internship and residency at the University Southern California, where he later also did a fellowship and a stint on the faculty, before coming to Cedars-Sinai in 2012.

During his medical training at the Los Angeles County+USC Medical Center, Allison's interest in joining the military grew. The facility provided training for enlisted military personnel serving as medics and in other medical support roles. Allison said he "was very impressed by their work ethic and character," and particularly touched by the dedication of service members as young as 19 or 20 years old.

Allison said he also came to realize that "the vast majority of injuries sustained in modern-day combat are orthopaedic ... and there's a critical shortage of orthopaedic surgeons in the military."

He said he promised himself that he would join the military but "I kept making up excuses not to."

Then, in 2015, Allison volunteered. He was spurred by massacres and other atrocities—including reported beheadings of children—by the Islamic State, which then held major portions of Iraq and Syria. The Islamic State, Allison said, was "doing some very bad things, and nobody was stopping them."

In Iraq, Allison felt very much a part of the battle against the Islamic State, even though his field hospital never came under direct fire while he was there. His unit was included in the planning for special forces strikes. The aim was to ensure that medical units would be available to stop any wounded soldier’s bleeding within an hour after the injury was suffered.

The pace of his work actually was slower than it is at his Cedars-Sinai practice. Still, he said, "just the act of always having to be ready during these certain key situations, when we were eager to help if any of our guys got hurt, really had an impact."

Allison, who was promoted to the rank of commander before his deployment, received the Army Commendation Medal for his service. In addition, for supporting Allison and the military effort, Cedars-Sinai and its Department of Orthopaedics overall received three Department of Defense honors: the Patriot Award, Seven Seals Award and Above and Beyond Award.

He said he takes pride in being part of Operation Inherent Resolve—the U.S.-led effort launched in 2014 that in March finished flushing IS out of the last remnant of its territory, in Baghuz, Syria.

"It made me realize the importance of camaraderie, of human connection, working with your colleagues in the unit, trusting them and allowing them to trust you. That was something I had never seen to that extent, even though I've been part of sports of teams and fraternities and groups before. This was taking it to the next level," Allison said.

Read more on the Cedars-Sinai Blog: Determination Got Joe Vedder Back on His Feet

RAM-ping up for Another Championship Season

While the Los Angeles Rams quarterback Matthew Stafford works on his timing in the pocket, sports medicine specialists from Cedars-Sinai Kerlan-Jobe Institute—renowned for treating today's top professional athletes—are going through their reps to …
Read more

Memorial Day: Orthopaedic Surgeon Reflects on His Tour of Duty