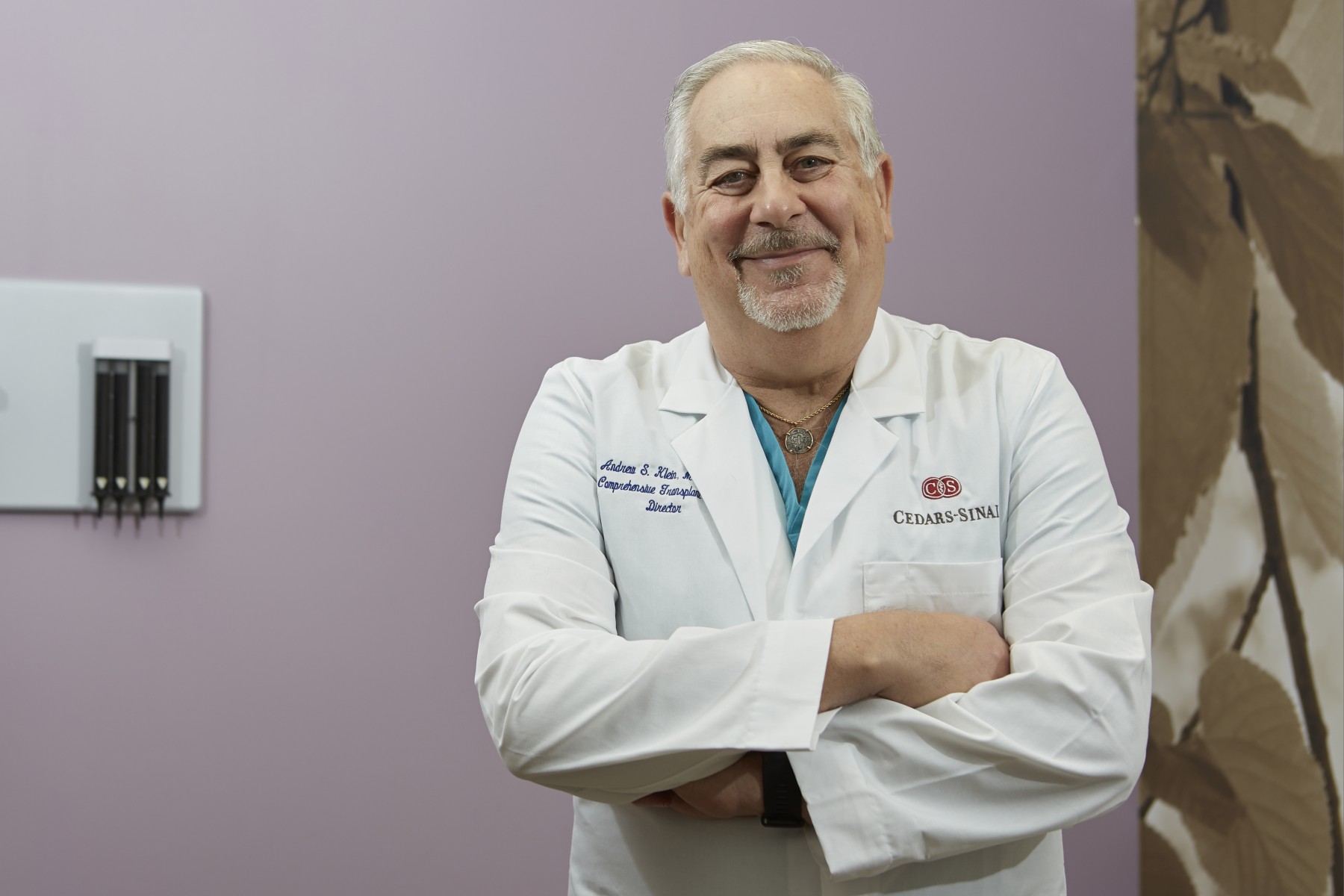 Andrew Klein, MD, MBA, is the 2019 president of the International College of Surgeons, U.S. Section. Photo by Cedars-Sinai.

Andrew Klein, MD, MBA, the Cedars-Sinai Esther and Mark Schulman Chair in Surgery and Transplantation Medicine, steps into the presidency of the International College of Surgeons (ICS), U.S. Section, on Jan. 1, 2019. A pioneer in transplantation surgery and research, Klein is the director of the Comprehensive Transplant Center at Cedars-Sinai, where he also serves as professor of Surgery.

"The International College of Surgeons is fortunate to have such an accomplished and thoughtful physician at the helm during this transformative time for healthcare," said Bruce Gewertz, MD, H & S Nichols Distinguished Chair in Surgery. "For more than three decades, Dr. Klein has played a key leadership role in the national transplant arena by spearheading the development of national policies for equitable allocation of donor organs. His excellence in patient care and extensive track record of global advocacy on behalf of transplant surgery make him uniquely qualified for this role."

The International College of Surgeons is a global federation of general surgeons and surgical specialists founded in Geneva, Switzerland, in 1935—with approximately 60 organized national sections around the world and 5,000 members in more than 100 countries. Based in Chicago, the U.S. Section is the largest of the national sections.

Klein's clinical interests focus on liver transplantation, hepatobiliary surgery and surgery for complications of portal hypertension—high blood pressure in the vein that carries blood from the intestines to the liver. He has authored or co-authored more than 150 original manuscripts and 29 chapters, and has lectured extensively in North America, Asia and Europe.

A fellow of the American College of Surgeons, Klein also is a former chairman of the United Network of Organ Sharing (UNOS) Liver and Intestinal Transplantation Committee and was elected secretary of UNOS in 2004. Since 2012, he has served in various leadership roles with the International College of Surgeons, including secretary, treasurer and vice president.

In his new role as president, one of Klein's priorities is to help underserved communities through the International College of Surgeons' global outreach efforts.

"I am honored to continue to play a leadership role in ICS's growth," said Klein. "We are now developing a task force that will collate the critical elements required for successful international surgical missions, leveraging the experience, resources, logistical support and contacts of like-minded groups."

Klein earned his medical degree from Johns Hopkins School of Medicine, where he also completed internships and residencies. He was a Harvard research fellow in transplantation immunology at The Massachusetts General Hospital, served as a surgical registrar at The John Radcliffe Hospital, Oxford University, and was a liver transplant fellow at UCLA.

In 2002, Klein received his MBA from Johns Hopkins University and, in recognition of his outstanding accomplishments in the fields of both medicine and business, was awarded the Distinguished Alumnus Award in 2009. In his free time, Klein is an avid scuba diver and underwater photography enthusiast. When work permits, he and his wife, Julia, can also be found spending time on their farm in Pennsylvania.

Russell Secker, now 67, was in Lake Tahoe in 2016 to run a series of ultra-distance races with his wife, Claire. The two had completed hundreds of marathons and races totaling thousands of miles. But …
Read more

Cedars-Sinai’s new director of Obesity Medicine in the Department of Surgery, Amanda Velazquez, MD, is determined to help prevent and treat Type 2 diabetes and obesity in the Latinx community."Our …
Read more