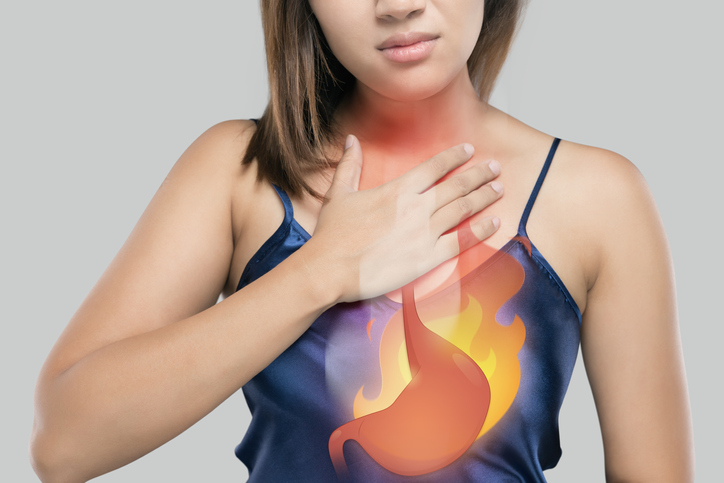 Gastroesophageal reflux disease (GERD), a digestive disorder that causes heartburn and other uncomfortable symptoms, may affect nearly a third of U.S. adults each week, and most of those who take certain popular medications for it still have symptoms, according to a new Cedars-Sinai study.

Also known as acid reflux, GERD is caused by gastric acid from the stomach flowing back up into a person's food pipe, or esophagus. This backup can happen when the lower esophageal sphincter, a muscle that briefly opens to let food into the stomach and closes to take food inside, relaxes too often or too long. Besides causing the burning sensation in the throat and chest known as heartburn, GERD can damage tissues and cause food to be regurgitated.

For their research, published today in the journal Gastroenterology, investigators conducted an online survey of more than 71,000 people age 18 or over across the U.S., asking them if they experienced specific GERD symptoms and how often, and if they were taking drugs for it.

"Our study is among the largest and most diverse population-based studies on gastrointestinal symptoms ever conducted," said Brennan Spiegel, MD, MSHS, director of Cedars-Sinai's Health Service Research, professor of Medicine and corresponding author of the journal article. Most previous published research on GERD, which found a somewhat lower incidence of the disease than this study did, was conducted within limited geographic areas or with a less representative sampling of U.S. adults, he explained.

An important feature of the new study was its finding that more than half of GERD patients who took popular over-the-counter drugs known as proton pump inhibitors, designed to reduce the amount of acid in the stomach, still reported persistent symptoms.

The survey also indicated that certain categories of people, including younger people, women, Latinos, and people with irritable bowel syndrome or Crohn's disease, were less likely to respond to proton pump inhibitors.

"Given the significant effect of GERD on quality of life for millions of Americans, further research and development of new therapies are needed to help patients whose disease does not respond to proton pump inhibitors," said Spiegel, who also directs the Cedars-Sinai Center for Outcomes Research and Education.

The investigators conducted their nationwide survey in October and November 2015 using MyGiHealth, a mobile app that asked respondents to select any symptoms they had experienced in the past week or "ever experienced." Investigators measured the severity of patients' symptoms, using validated questionairres from the National Institutes of Health. The symptoms included GERD-relevant ones -- such as heartburn, acid reflux, or gastroesophageal reflux -- plus other general gastrointestinal symptoms such as abdominal pain, constipation and nausea.

"The MyGiHealth digital platform allowed us to efficiently recruit a large, highly diverse, representative population in a very short period of time," said Christopher Almario, MD,MSHPM, assistant professor of Medicine at Cedars-Sinai. Yet it also carried potential limitations because individuals with limited computer skills or poor access to the internet may be underrepresented, he explained. In addition, since the study was described as a "GI Survey" to potential respondents, it may have led to overestimating GERD prevalence since those without gastrointestinal issues may have opted not to complete the survey.

The other authors of the study were Sean Delshad, MD, MBA, a former research intern at the Cedars-Sinai Center for Outcomes Research and Education, and William Chey, MD, professor in the Division of Gastroenterology at Michigan Medicine in Ann Arbor, Michigan.

Disclosures: Brennan Spiegel and William Chey are consultants for Ironwood Pharmaceuticals and patent holders and principals at My Total Health. Christopher Almario has a stock option grant in My Total Health.

Funding: This study was funded by Ironwood Pharmaceuticals, which did not have a role in the collection, analysis, or interpretation of data, or drafting of the manuscript. The Cedars-Sinai Center for Outcomes Research and Education is supported by The Marc and Sheri Rapaport Fund for Digital Health Sciences & Precision Health. Christopher Almario was supported by a career development award from the American College of Gastroenterology. Almario and Spiegel are supported by the National Center for Advancing Translational Science of the National Institutes of Health under UCLA CTSI Grant Number UL1TR001881.

Read more on the Cedars-Sinai Blog: Ask a Doc: What Causes Stomach Ulcers?