Second Act for a Dynamic Duo

A couple makes a comeback from dual health crises.

Paul Del Vecchio and Wayne Smith live their life as a duet.

"We thrive on it," Del Vecchio chimes in, over his husband's shoulder. "We still have a crush on each other."

After more than 40 years of living and performing together, the couple still lives in harmony: Del Vecchio's gentle nature complements Smith's aplomb. They're perfectly in sync, including in times of crisis. Five years ago, they each became critically ill mere months apart—one with cancer and the other with a heart attack.

With the help of the doctor they share, and the support of their families and each other, Smith, 71, and Del Vecchio, 66, both recovered. Healthy and retired, they emerged with a two-man show performing Big Band concerts at assisted living facilities across Los Angeles (though their in-person shows are suspended indefinitely).

"We both had life-threatening illnesses, and we both came through scot-free," Smith says. "It's an amazing miracle to get to share."

Smith and Del Vecchio fell in love on the stage, in 1976 San Francisco. Del Vecchio, fresh out of Chico State University, joined the cast of a revival of Babes in Arms, as the new lead dancer. Smith, a classically trained opera singer, sang lead in the musical comedy. The show was a smash and the two were smitten: Del Vecchio left mixtapes with songs by The Carpenters in Smith’s dressing room before their first date.

When the musical wrapped, the couple embarked on careers that would take them around the world—Del Vecchio danced in Tokyo and Smith sang in Paris. They moved to New York, where Del Vecchio performed in the Broadway musical 42nd Street and Smith sang in church choirs by day and Catskills resorts by night.

When they relocated to celluloid L.A., Del Vecchio picked up gigs in soap operas and movies; Smith taught voice lessons and took on a corporate “survival gig” that allowed him to travel extensively.

The lifestyle could get stressful. The rejection, the hustle and the schedule eventually led them to jobs at Trader Joe’s—a natural fit for the warm and charismatic duo, who worked the same shifts at the same store. They wed in West Hollywood in 2008—their colleagues cheered for them when California legalized same-sex marriage—and settled into a more relaxed chapter of their lives. Until, in strange synchronicity in 2015, they suffered major health setbacks.

"They're so loving and extremely close, and they supported each other through their tough times."

First came Del Vecchio's bladder cancer. He noticed blood in his urine, and assumed it was an infection. His primary care doctor, Yalda Azarmehr, MD, referred him to a urologist, and the diagnosis shocked him.

Del Vecchio underwent surgery to remove his bladder and prostate. His surgeon, Hyung L. Kim, MD, was "serious and matter of fact, but also had a sense of humor," which quelled his anxieties from the start.

"His attitude was as important as his technical skills," Del Vecchio says of Kim, director of the Academic Urology Program and the Homer and Gloria Harvey Family Chair in Urologic Oncology in honor of Stuart Friedman, MD.

It took a year to get used to his urostomy bag—he suffered complications that made him feel confined to the house.

Then, two months after his surgery, before Del Vecchio could fully recover, Smith suffered a massive, life-threatening heart attack.

"If you had written it in a script, it would be implausible," Smith says of the devastating duality.

He'd fallen ill swiftly, with flu-like symptoms and a painful burning in his armpits, an atypical reaction. After about a day, he showed up for an emergency appointment at Azarmehr's office.

She ran tests and instructed him to go to the Emergency Department (ED) if his symptoms got worse. But the next morning, Smith again made his way to Azarmehr's office, wanting to see his own, trusted doctor. At 7 a.m., pale and sweating, he waited for her in the hallway, cradling a bucket to catch his vomit.

Azarmehr shepherded him to the ED immediately, where an EKG showed he was having a heart attack. Doctors placed stents in his heart that night, and again a couple of days later. After rest and some lifestyle changes, he's now healthy.

The couple says they wouldn't be here without their longtime physician.

"As far we we're concerned, she saved both of our lives," Smith says.

"They let me know as soon as they developed symptoms, and they followed up," she says. "Patients often don't want to bother me with their concerns, but this is what we do, and this is why I'm here."

She also touts the strength of their relationship as a big advantage in their recovery.

"They're so loving and extremely close, and they supported each other through their tough times," Azarmehr says. "I cannot imagine how scary that must have been. But they have such a positive outlook on life."

Last year, Azarmehr moved from her West Hollywood office, minutes from Smith and Del Vecchio's apartment, to Tarzana, a longer drive. The couple followed her there, shrugging off the commute.

"When you and your doctor go through something like this together, it can be difficult to start with someone who doesn't know you at all," Azarmehr says. "That's where the relationship is really important."

With renewed gratitude for their health, Smith and Del Vecchio now enjoy hikes in Franklin Canyon and drives around pocket neighborhoods ("Side Street Sundays," they call it).

But mostly, they've thrown themselves into their singing act, which they have been performing for older adults in assisted living facilities—sometimes for patients with Alzheimer's or Parkinson's who have lost most of their memory. Their faces animated and their feet in step, they sing tunes by Bing Crosby, the Andrews Sisters, and other gems from the 1930s, '40s and '50s that they know will resonate.

"It's magical to watch the power of music get people's shoes tapping, get them humming a little and mouthing the words," Del Vecchio says.

In mid-March, safe-distance guidelines forced them to halt their shows and shelter at home. Not content to press pause on their purpose, they're using the time to research new songs to add to their repertoire—relevant tunes like "Accentuate the Positive" and "Don't Fence Me In."

"When we come back, people are going to be sick of the old show, so we've got to come up with something new," Del Vecchio says. "It keeps our brains active."

And they're broadcasting live streams online for clients and friends from their improvised home stage.

"We're happy to be performing live, even if our audience is on the other end of a computer," Smith says.

Now more than ever, the couple focuses on how grateful they are to keep living.

Smith completes the thought, "We just keep on trucking, see what's next and feel glad we get to do it together."

Smith and Del Vecchio see their doctor in the new Cedars-Sinai primary care offices in Tarzana, where four physicians help bring excellent care closer to home for patients in the San Fernando Valley. 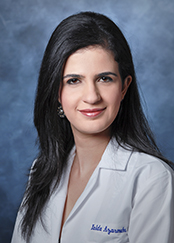 Azarmehr graduated from medical school at the University of California, San Diego, and completed her residency at Cedars-Sinai in 2012. Born in Iran, at age 18, she and her family fled the country to escape religious persecution. She had to restart her medical training in the United States but never questioned her calling. "Every single day, at least one patient reminds me I absolutely love what I do," she says. "Cedars-Sinai feels like home to me." She and her husband live in Tarzana with their 2-year-old daughter and enjoy spending time with their large extended family. 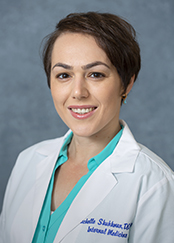 Shukhman earned her medical degree at the Arizona College of Osteopathic Medicine at Midwestern University and completed her internship and residency at Cedars-Sinai in 2016. One foundation of her practice is encouraging patients to prioritize their own health. "It's a conversation I have 10 times a day as part of my job to be the central point in my patients' care," Shukhman says. She lives in Woodland Hills with her husband and their 2- and 5-year-old sons, who play in local sports leagues and enjoy trips to the zoo.

Thakkar went to medical school at Wayne State University and joined Cedars-Sinai in 2017. "In primary care, we get to grow old with our patients and develop long relationships," he says. "It's a gift and privilege when a patient tells you everything—not just about their chest pain, but an intimate look into their life. It's sacred and special." Thakkar and his wife live in Westlake Village with their 10-year-old son and 7-year-old daughter. The family enjoys hiking in Malibu Creek State Park and Wildwood Regional Park. 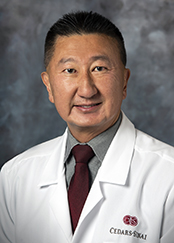 Tsang earned his medical degree at Saint Louis University School of Medicine and joined Cedars-Sinai in 2019. He stays connected to his patients through My CS-Link™. "I encourage my patients to send me a message anytime rather than turning to the internet," he says. "I can provide more accurate information, and they won't necessarily have to make an appointment." Tsang, his wife and their sons, ages 16 and 18, live in La Cañada Flintridge, where they enjoy family-oriented activities like the town's annual July 4 celebration.