Teen Back on His Feet After Charcot-Marie-Tooth Disease Surgery

Growing up in Alaska, 17-year-old Connor McBride had easy access to rigorous outdoor activities. Hunting, camping, sledding—they were all right outside his front door.

Despite his yearning to take advantage of these offerings, by the age of 10 Connor found himself increasingly unable to keep up with his peers—his feet were turning inward, and it was difficult to maintain balance.

"The local podiatrist said there was nothing to be done, it was just the way Connor was made," says Tracy McBride, Connor's mother.

Tracy refused to let that be the final word. She took Connor to a pediatrician who was visiting their town.

“She worked late after our appointment, talking to other doctors and doing research," Tracy recalls. "Then she called us that night and said, ‘I think Connor has CMT.’”

CMT is Charcot-Marie-Tooth disease, the most common inherited motor and sensory nerve disease, which typically affects the feet and, later, the hands. The name rang a bell for Tracy.

“I was momentarily taken aback, and then suddenly I remembered: My grandmother had that, too," Tracy says.

"By the time they find me, CMT patients have often given up hope. They have seen doctors who say there is nothing to do."

Even with a diagnosis, finding the best path forward was challenging. The sports medicine doctor Tracy consulted said that, aside from physical therapy and fitting Connor for custom leg braces, there were no other treatment options.

Meanwhile, Connor’s feet and ankles were steadily worsening, and the braces were extremely painful. Eventually, he stopped playing games with friends, and gave up running, biking and even trying to walk.

Tracy was desperate for help. She was able to find a support group for CMT online and got referred to orthopaedic surgeon Dr. Glenn Pfeffer, director of the Foot and Ankle surgery program at Cedars-Sinai. The medical center's Charcot-Marie-Tooth Clinic is among only a handful of nationally recognized CMT programs in the country.

"Living in Alaska, our medical options are limited," Tracy says. "Dr. Pfeffer told me that, with surgery, Connor could live a normal life."

Dr. Pfeffer is frequently on the receiving end of phone calls like the one he took from Tracy.

"By the time they find me, CMT patients have often given up hope. They have seen doctors who say there is nothing to do," Dr. Pfeffer says. 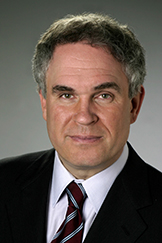 "Not all patients with CMT can benefit from surgery, but those with crooked, unbalanced and painful feet can be given their life back with reconstructive surgery that creates a foot that is flat on the ground."

Unfortunately, CMT patients are often prescribed braces, which are not appropriate for crooked feet.

"Never put a crooked foot into a brace," Dr. Pfeffer says. "When I see a CMT patient with crooked feet, my job is to let them know there is hope – both to walk more normally and probably to avoid the use of braces completely."

June 2020, Connor and his mom flew to Los Angeles so Dr. Pfeffer could operate on his left foot. Three months later, they were back for another surgery, this one on the right foot.

"To address the problems Connor was having, we cut and repositioned three bones, moved three muscles, lengthened three tendons, straightened five toes and released five joint contractures," Dr. Pfeffer says. "Each surgery was four hours long, done as an outpatient. By using a pain pump after surgery, Connor had no pain for three days, then only minimal discomfort."

The results were immediately apparent.

"The surgeries Dr. Pfeffer performed completely changed Connor’s life," Tracy says. "He is so much more active now. He loves golf. Whereas before he couldn’t travel more than a few steps on his feet, now he can walk eight-and-a-half out of nine holes.”

From Connor’s perspective, seeing Dr. Pfeffer was the best thing that could have happened to him.

"Before the surgeries, my hands and feet would freeze easily in the cold," Connor says. "I couldn’t jump without pain. My hands would tire out quickly whenever I was writing. Other kids used to tease me about how I was weak, and I took it personally. But now, I'm stronger. I can outrun most of my friends on icy roads."

Read: One Soccer Star, Two Torn ACLs: How Cedars-Sinai Made a Difference for One Student-Athlete

Dr. Pfeffer was thrilled with the result of Connor's surgeries to treat CMT and gratified to know his work continues to make a difference.

"Connor is a real Alaska boy, and he had given up much of the life he loved," Dr. Pfeffer says. "Today, he sends me videos of himself golfing, hunting and hiking—all things he couldn’t do before."

CMT is considered a progressive disease, but Dr. Pfeffer says the progression is often not noticeable in patients. As a result, Connor is unlikely to need additional surgery. The key to treating CMT in patients like Connor is getting connected with the right resources in the first place.

“It’s hard enough growing up without having a disease that causes problems with balance and gait, especially one that many people don’t know how to diagnose,” Dr. Pfeffer says.

"That’s why it’s so important to get the word out that the crooked, unbalanced, high-arched feet that are caused by CMT can be corrected with surgery. No one should ever have to walk on a crooked foot."