Puberty Blockers: What You Should Know

If it seems like kids are growing up quicker today than when you were young, it’s not just your imagination.

The average age of puberty has been falling for decades. It’s now around 10.5 years old for girls and 11.5 years old for boys, according to the Endocrine Society. The COVID-19 pandemic sped up the timeline even more: Multiple international studies found a rise in girls seeking care for precocious puberty during 2020 stay-at-home orders.

The condition doesn’t have to disrupt your child’s life. Providers can treat precocious puberty—marked by breast development before age 8 or testes growth before age 9—with hormonal suppressants, also called puberty blockers. With supervision, these reversible drugs safely and effectively delay a child’s development until they’re ready.

"We want to make sure development isn’t happening too quickly, so that the child feels comfortable around their peers—not different or in a body that’s older than they are emotionally."

About 1 in 5,000 to 10,000 children are affected by precocious puberty, the National Organization for Rare Disorders says. Maturing too early can jeopardize growth and mental health, and because most girls reach puberty between 8 and 13 years old and boys between 9 and 14 years old, it can isolate children at an awkward time in their lives.

"We want to make sure development isn’t happening too quickly, so that the child feels comfortable around their peers—not different or in a body that’s older than they are emotionally," says Cedars-Sinai pediatric endocrinologist Dr. Bahareh Schweiger. 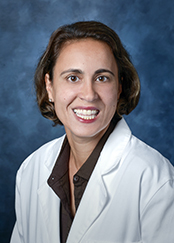 Puberty starts with a gland in the brain producing gonadotropin-releasing hormone (GnRH). That sets off a hormonal chain reaction in the pituitary gland that spurs reproductive organs to release sex hormones, including estrogen and testosterone.

Genetics can often predict if a child will be an early or late bloomer, Dr. Schweiger says. Ethnic backgrounds play a role too, with Black children developing about a year earlier than their counterparts.

Most kids with precocious puberty don’t have an underlying health problem.

But sometimes the condition can be caused by a hamartoma or another tumor that has formed in the brain glands or in the ovaries, testes or adrenal glands (indicating a gonadotropin-independent form), according to the National Institutes of Health. Head trauma and radiation and infections or malformations in the brain—as well as nervous system problems—could also set off precocious puberty.

Read: An Inclusive Guide to Puberty and Periods

Pandemic inactivity and stress in children

Dr. Schweiger has seen an uptick in signs of puberty in young patients. Scientists are still trying to figure out what’s behind the recent jump.

One likely culprit could be weight gain, especially obesity.

As people stayed home at the beginning of the pandemic, the rate of body mass index (BMI) increases among young people ages 2 to 19 years old roughly doubled, according to the Centers for Disease Control and Prevention.

Stress and anxiety also skyrocketed alongside COVID-19, which may have raised cortisol (the body’s stress hormone) in a way that affected children’s endocrine systems.

Similarly, kids spent more time on devices for both school and play and less time outdoors. Dr. Schweiger and researchers speculate this lifestyle shift may have released serotonin and dopamine (mood hormones) and lowered vitamin D, altering the brain.

Getting a period for the first time, growing breasts or a cracking voice can be scary and confusing when a child isn’t ready emotionally. Parents might not have even had the chance to discuss body changes yet, and the child could be the first in their class to experience these changes.

An early transition—sometimes occurring in kids as young as 6 years old—often hurts self-esteem if left unchecked.

Early puberty is tied to depression, anxiety, eating disorders and substance use, especially in girls, and also leaves kids more vulnerable to sexual abuse and harassment.

For children who are transgender and gender-diverse, it can be worse because their maturing bodies may appear as ages and genders that don’t align with how they identify.

How parents can help a child during precocious puberty

Reassure your child that they don’t need to be embarrassed or afraid.

"These are normal changes that happen to your body that tell us that everything’s working normally—just a little bit too early or too fast," she adds.

Consider a counselor or support group if they’re struggling to cope.

Precocious puberty can have physical consequences as well, raising long-term heart disease and breast cancer risk and prematurely aging bones. That could compromise a child’s height if their growth plates close too soon.

If you notice your child forming breasts before age 8 or developing underarm hair, pubic hair, acne or body odor before age 9, contact their primary care doctor for an evaluation, Dr. Schweiger urges.

A pediatrician can run blood tests, X-rays, ultrasounds and MRIs to detect any tumors and determine bone age and hormone health.

What to know about puberty blockers

A child might need treatment, depending on the cause of early puberty, how young they are and any resulting mental health symptoms they are experiencing. That could include surgery if a tumor is to blame.

These puberty-blocking drugs postpone the process by suppressing gonadotropin hormone release. They include:

While puberty blockers have been scrutinized by some due to their use in caring for transgender children, these drugs have been in use since the 1980s and are overwhelmingly safe if used appropriately. Side effects such as bone health risks typically only occur with prolonged use past the age of puberty.

A pediatrician can use these medications to slow down physical maturity to a healthier pace, protect bone growth and help young patients adjust as needed. Experts suggest discontinuing the treatments around age 12.