For years, if you asked Robert Rose how he was feeling, the answer was probably "exhausted."

He learned why he was so tired all the time more than 40 years ago when he was diagnosed with obstructive sleep apnea, a disorder that causes breathing to repeatedly stop and disrupt sleep many times per hour. For two decades, he tried a number of different devices designed to help people with sleep apnea, but none of them worked.

"It's great we have an option for patients who have been struggling for years just to get a restful night's sleep. Sleep is one of the most important factors in improving and maintaining good health."

"I just couldn't adapt to the hoses and the masks," Rose says. "So, for years at a time, I would have what I call unprotected sleep."

Rose, an 80-year-old retiree who lives in south Orange County with his wife, Sandy, would catch himself drifting off at stop lights, and on a couple of occasions he tapped the car in front of him. When he heard about a new pacemaker-like device for sleep apnea, he was willing to be among the first people to get one. That's what brought him to Martin Hopp, MD, PhD, an otolaryngologist and medical director of the Cedars-Sinai Sinus Center.

Read: Myths and Facts About a Good Night's Sleep 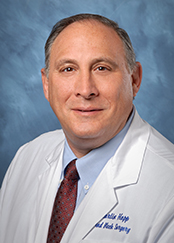 What Is Obstructive Sleep Apnea?

The muscles and tissues of the throat help keep the airway open during sleep to allow air to pass to the lungs. In people with obstructive sleep apnea, the tongue or other soft tissues of the throat relax, blocking the airway and cutting off the body's oxygen supply. The brain will then signal the body to rouse from sleep, just long enough to shift and open the airway.

After a few breaths, the tissues relax again, restarting the cycle. Even though the sleeper may not be aware of it, this cycle can interrupt their sleep dozens of times per hour and leave them tired during the day. In addition to snoring and daytime sleepiness, common symptoms of sleep apnea include irritability, waking during the night and difficulty focusing.

Rose says he experienced all of those symptoms, including bouts of snoring that had his wife nudging him awake and sometimes to the guest room.

Rose tried a constant positive airway pressure (CPAP) machine first. These machines supply constant airflow through a mask worn while sleeping that is intended to keep the airway inflated. He also tried machines that worked similarly, but adjusted the level of air pressure. Although these options work well for many people with sleep apnea, they didn't work for Rose.

"I felt like I was sleeping with a vacuum cleaner and I just couldn't adapt to it," he says. Most nights, he'd rip the mask off or never put it on.

He tried a dental appliance designed to help keep the tongue in a forward position, but he never did a sleep study to confirm it was working. After a couple of years, he had oral surgery and it didn't fit anymore.

"I was back to unprotected sleep again," he says.

Rose saw an advertisement for a new surgical treatment for sleep apnea and made an appointment with Dr. Hopp. Rose first underwent a physical examination and a sleep study, then his procedure was scheduled.

Hopp works with a team of surgeons to perform a treatment known as upper airway stimulation. The team includes Daryoush Saadat, MD, an otolaryngologist and head and neck surgeon, as well as a thoracic surgeon.

A device similar to a pacemaker is placed in the chest, often as an outpatient procedure. The sensor in the chest monitors breathing, and has sensor and stimulator leads attached. When breathing is interrupted, it signals the sensor in the neck to stimulate the throat muscles to open the airway.

The device is calibrated four weeks after it's implanted and turned on by remote control. After using the device for a few weeks, Rose and Dr. Hopp checked the results with another sleep study to make sure the device was working properly. 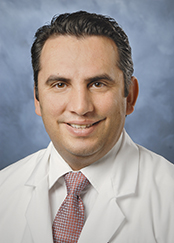 "It's great we have an option for patients who have been struggling for years just to get a restful night's sleep," Dr. Hopp says. "Sleep is one of the most important factors in improving and maintaining good health."

Rose has been enjoying restorative nights of sleep for nearly three years.

"You notice a difference instantly in terms of how you feel," Rose says. "After about three months, the change in your energy level and your mood is even more dramatic. If you've been sleep deprived all your life, it takes your body a while to get used to having enough sleep."