"I was freshly postpartum and very emotional. I cried quite a bit,” Lillian says. “It took some time for my husband, Justin, to process the news, but then he, too, felt the weight of it."

An inherited blood disorder, sickle cell disease (SCD) causes red blood cells, which are normally round, to become hard and C-shaped like a sickle. These abnormal cells can get stuck in small blood vessels and block blood flow. This causes pain and complications such as stroke and infections.

According to the Centers for Disease Control and Prevention (CDC), SCD affects millions worldwide and is common in people whose ancestors came from African, Hispanic, Middle Eastern, Indian and Mediterranean countries. In the African American community, about one out of every 365 babies is born with SCD.

"We decided to choose faith over fear and to educate ourselves about the disease."

After Savannah’s diagnosis, relatives rallied round Lillian and Justin, reassuring the young couple with their words, love and prayers.

“As Christians, we have a firm belief in God and what He has planned for Savannah’s life. So, we decided to choose faith over fear and to educate ourselves about the disease,” Lillian says.

She and her husband joined online groups for parents of children with SCD. The couple also tapped their personal network, gleaning information from friends with the disease to better understand what they might expect their child to experience.

From these online and face-to-face conversations, the couple learned the basics of living with SCD. That knowledge was further expanded when they took Savannah, then 5 weeks old, to her first appointment with Cedars-Sinai pediatric hematologist-oncologist Dr. Nicole Baca.

“We were already pretty well informed, but then Dr. Baca took us through a full presentation about the disease—what it is, how it happens and how it happened to Savannah,” Lillian says. 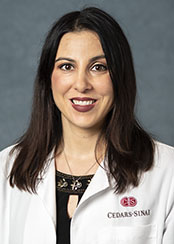 Their early discussions with Dr. Baca explored potential treatments, such as gene therapy and bone marrow transplant. They also reviewed the medication and care choices they would need to make in their daughter’s first year.

"I give parents that information early, so they don’t have to make an urgent decision when it comes time for their child to start taking medications such as hydroxyurea around 6-9 months of age," Dr. Baca says.

"Talking about these choices in advance gives them time to ask questions, look things up and think about their options."

"She had just started crawling, so we first thought she may have fallen over and injured it," she says. "But we were told to watch out for things like swollen fingers and limbs.”

Dr. Baca reassured Lillian but said to contact her immediately if the swelling progressed from the child’s finger to her hand.

A week later, Savannah grew fussy and weepy. The girl’s mood shift had coincided with teething, so Lillian could not tell whether the inflamed finger or sore gums had caused her daughter’s discomfort.

The next morning, Savannah awakened with two swollen hands. “She wouldn’t let us touch her. When we got close, she would cry and push our hands away. So, we knew she was in pain.”

Lillian messaged Dr. Baca, who advised her to bring Savannah to the hospital.

By the time Lillian and Savannah arrived at Cedars-Sinai Medical Center, a room was ready and waiting for them. Their care team started an IV drip to hydrate Savannah and managed her pain with acetaminophen and ibuprofen.

"There was such a sense of urgency," Lillian says. "Doctors and nurses kept coming in to check on her. It felt so good knowing that if anything were to happen to her, we had the right support."

Cedars-Sinai provides a comprehensive care team for sickle cell patients that includes pediatric hematologists, pain management specialists, neuropsychologists and a host of subspecialists to help with each patient’s unique needs.

“There’s always a doctor on the floor, so if something’s not working, changes aren’t made over the phone. Instead, a doctor is right there,” Dr. Baca says.

After about 36 hours in the hospital, Savannah returned home.

Having faith in Savannah's future

Savannah’s daily life is similar to that of other babies her age. She plays with puzzle toys and looks to her parents for love and reassurance. As a sickle cell patient, her life also includes frequent medical appointments, twice daily doses of penicillin to prevent infection and a daily dose of hydroxyurea to help manage her sickle cell anemia.

SCD requires lifelong care, which is made immensely easier when you have a care team you trust, Lillian says.

“I love our care team at Cedars-Sinai. They’ve given us so much support,” she says. “We have faith that things will work out and Savannah will have an amazing life.”