Traditionally considered a disease of white men over age 60, atrial fibrillation (AFib)—an irregular heart rhythm originating in the top chambers of the heart—is actually the most common heart rhythm problem across all races and sexes. It affects an estimated 5 million Americans, and experts expect that number to skyrocket to more than 12 million by 2030.

Studies suggest that AFib is most prevalent in white patients, but the fallout from AFib may be more pronounced among women, African Americans and Latinos than currently reported.

We asked Dr. Archana Ramireddy, a cardiac electrophysiologist at the Cedars-Sinai Smidt Heart Institute, to guide us through the basics of AFib and explain why the condition is underrecognized and undertreated in women and minority groups. 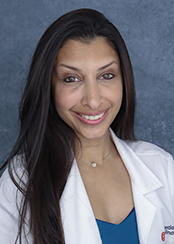 “If you look at the prevalence of AFib in the population, men appear to have a 1.5 times higher risk than women. But since women live longer than men and tend to develop AFib 10 years later than men, AFib actually affects more women than men.”

In AFib, disordered or rapid electrical signals cause the heart’s atria to contract in a chaotic fashion (fibrillate). Unfortunately, blood that is not completely emptied into the lower chambers can pool in the atria. This can lead to the formation of blood clots, which can go to the brain and cause a stroke.

Risk factors for AFib include:

AFib can happen in periodic episodes—particularly after drinking alcohol, a stressful event (think car accident or surgery) or acute infection (think sepsis or SARS-CoV-2, the virus that causes COVID-19)—or it can be persistent. Left untreated, AFib can lead to a host of complications ranging from blood clots and stroke to heart failure and, rarely, even a heart attack.

How is AFib different in women?

AFib is increasingly recognized as a condition that affects women. The trouble is most studies on AFib are made up of samples that primarily include white men.

“If you look at the prevalence of AFib in the population, men appear to have a 1.5 times higher risk than women,” Dr. Ramireddy says. “But since women live longer than men and tend to develop AFib 10 years later than men, AFib actually affects more women than men.”

In fact, Cedars-Sinai researchers published a study in JAMA Cardiology showing that women have a 50% higher risk of developing AFib than men, after accounting for height (the taller a person is, the greater their risk of AFib).

To complicate matters, women present with different symptoms than men. Instead of heart palpitations and shortness of breath (more commonly signs of AFib in men), women may feel weak, faint and lightheaded. As a result, women may not seek medical attention until their AFib has progressed. And unlike men with AFib, who typically have coronary artery disease, women with AFib often have high blood pressure and valve disease.

“Women are also more likely than men to have paroxysmal atrial fibrillation, meaning AFib that starts and stops without warning,” Dr. Ramireddy says.

“Unfortunately, paroxysmal AFib can be harder to diagnose because doctors can’t always catch it on a heart monitor, and women with an erratic or irregular heartbeat are less likely to be referred to a specialist compared to men.”

How is AFib different in minority groups?

While population-based studies typically report a lower burden of AFib in African Americans and Latinos, those communities have a higher incidence of risk factors for AFib, including obesity, high blood pressure and diabetes.

Called the AFib paradox, this discrepancy can result from several factors:

No matter your race or sex, you can reduce your risk of developing AFib and associated complications with lifestyle changes:

“Risk reduction is critical for everyone,” Dr. Ramireddy says. “When you lose weight, avoid alcohol, and treat chronic conditions like hypertension, diabetes, and sleep apnea, you dramatically lower your risk of AFib.”

Are you already suffering from an erratic heartbeat? A variety of medications can help control your heart rate (beta blockers) and rhythm (antiarrhythmics) as well as reduce your risk of stroke (anticoagulants).

You may also be a candidate for a procedure called catheter ablation, which uses either heat or cold to destroy tissue in the heart and disrupt the faulty electrical signals that cause the arrhythmia.