Yvette Camacho of Fontana, California is home with her newborn baby, Emery, and enjoying every moment, well aware that two months ago there was a strong possibility neither would live. 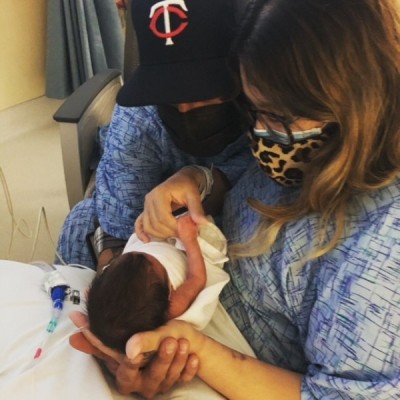 An otherwise healthy 30-year-old, Camacho was 26 weeks pregnant when she became ill with COVID-19. She slowly deteriorated with high fevers and chest pain, and by the time she went to nearby San Antonio Regional Hospital, doctors said she had pneumonia and needed to be intubated. She also had a very difficult decision to make.

"Doctors told me the baby might not make it," said Camacho. "I needed to decide if there was going to be my life or the baby's life to be saved. So my boyfriend and I had discussed that, and we have chosen if things came to that matter, then it would be me because I do have a 7-year-old at home."

Camacho's condition worsened and the decision was made to airlift her to Cedars-Sinai, where a large team of healthcare workers was standing by.

At Cedars-Sinai, doctors determined she needed to be placed on ExtraCorporeal Membrane Oxygenation (ECMO), a life support machine, which would work as an artificial lung. But first, they needed to deliver her baby at 29-weeks' gestation.

Melissa Wong, MD, of the Maternal Fetal Medicine Division, describes a scene that sounds like a Hollywood movie: A crowded Intensive Care Unit (ICU) hallway, with 20 people from the ECMO team and 10 others from the Neonatal Intensive Care Unit (NICU) standing by, while the baby was delivered via emergency cesarean section—not in the operating room, but in the ICU.

"I would say it was controlled chaos," Wong said. "Our table was essentially the same table that people take their lunch and dinner trays on. Our wonderful tech was able to sort of fashion that into a sterilized makeshift bar table to deliver the baby."

As soon as the baby was delivered, the other two teams took over. Cardiothoracic surgeon Dominic Emerson, MD, led the team that placed Camacho on ECMO. Used only for patients who have a severe and life-threatening illness that stops their heart or lungs from working properly, the ECMO machine pumps blood from the patient's body to an artificial lung (oxygenator) that adds oxygen to it and removes carbon dioxide. Thus, it replaces the function of the person's own lungs.

"I think she would not have survived, unfortunately, without the ECMO; she was that sick," said Emerson. "I think if we'd waited at all or if the transfer had been delayed, I don't think she or the baby would have survived. "

At the same time, neonatologists quickly took over the care of the premature baby. Led by Deepti Mathur, MD, of the Cedars-Sinai

"The challenge for us was that the NICU team had to resuscitate a baby in an environment not equipped for that purpose," Mathur said. "We were working in the corridor. Anesthesia medications given to the mother were passed on to the baby, so the baby needed intubation and a ventilator within seconds after birth."

As soon as the baby was stable enough, she was transported to the NICU.

For 10 days, mother and baby improved separately. Social workers in the NICU documented the baby's progress with daily photos. After 10 days, though still intubated, Camacho awoke and nurses showed her pictures of her baby.

Eventually, Camacho was well enough to go home, despite suffering some long-term effects of COVID-19. The baby was transferred back to the NICU near her home at San Antonio Regional Hospital. One month and two pounds later, Emery was also ready to go home.

"I do believe that the baby and myself are miracles," Camacho said. "When I did get released, I found out close family members and close friends didn't make it off the ventilator, so I'm very grateful to see another day."

Read more in Discoveries magazine: On the Front Lines of COVID-19.

In many ways 19-year-old, Brenna Kahlen is a typical teenager. She is living at home in Newport Beach, working and going to college. But unlike most of her peers, Brenna is a now a medical first.Brenna was born with a disease known as tuberous …
Share this release (opens in dialog)

Even During Pandemic, Volunteers Bring Comfort

The Ruth and Harry Roman Emergency Department at Cedars-Sinai sees more than 85,000 patients each year. Among the first to greet those patients and their loved ones–even during the coronavirus pandemic–are Cedars-Sinai’s blue-coated volunteers, who …
Share this release (opens in dialog)

Irritable bowel syndrome (IBS) is the most common gastrointestinal disorder, affecting 10-15% of the world’s population. Approximately two-thirds of those who suffer from IBS are women. The disease can have mild forms or cause severe debilitation as …
Share this release (opens in dialog)