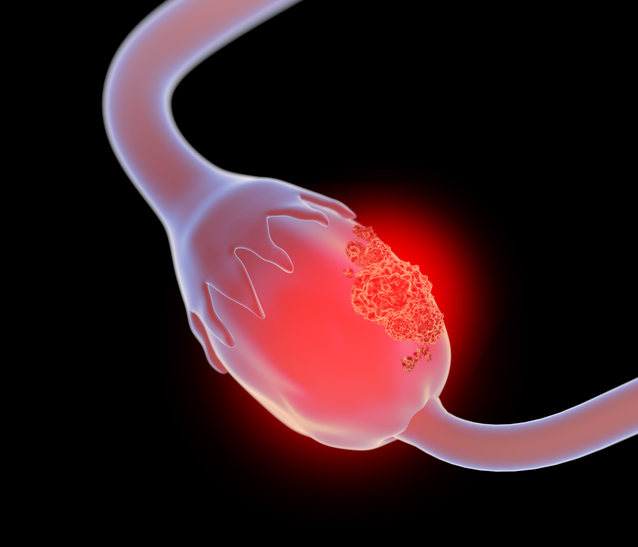 Depiction of an ovary with cancer cells. Illustration by Getty.

A team of researchers at UCLA's Jonsson Comprehensive Cancer, Cedars-Sinai Cancer and Dana-Farber Cancer Institute have newly identified 34 genes that are associated with an increased risk for developing the earliest stages of ovarian cancer. The findings, published today in the journal Nature Genetics, will both help identify women who are at highest risk of developing ovarian cancer and pave the way for identifying new therapies that can target these specific genes.

"If you detect ovarian cancer really early, then the survival rate is very high, nearly 90 percent," said Pasaniuc, who is also a member of the UCLA Jonsson Comprehensive Cancer Center. "But that doesn't happen often. Most cases are found at a later stage and survival drops dramatically. That's why we want to understand the genetics behind it—so we can do a better job at predicting who is at a higher risk of developing this cancer."

The study revealed that when we look at the relationship between women's risk of ovarian cancer, as defined by their genetic blueprint, "there is an interplay between their genetics and specific genes that drives the very earliest stages of cancer development," said Gayther, also co-director of the Applied Genomics, Computation and Translational Core at Cedars-Sinai.

The current study builds on previous research of large-scale genetic data gathered over more than a decade by the Ovarian Cancer Association Consortium. Those researchers compared the genetic profiles of about 25,000 women with ovarian cancer and 45,000 women without the disease. The investigators found more than 30 regions in the genome that are associated with ovarian cancer.

"One novelty of this work is that we looked at genetic variants that operate through alternative splicing rather than just the total abundance of a gene, which led us to genes we would not have otherwise identified, including one validated experimentally. Beyond a better understanding, if these risk mechanisms really operate through splicing, that also opens up new drug-target opportunities," Gusev said.

To pinpoint the genes, the researchers analyzed patient data to try to find genetic variants in the DNA blueprint that explain the patient disease status.

The idea of combing through large amounts of data to establish which specific genes drive ovarian cancer development may seem simple, but there are thousands of possible gene targets that can be affected by numerous mechanisms, so putting the pieces together is a huge computational and statistical effort, Gayther said.

"This study also shows how critical it is to study the specific cells from which ovarian cancers arise," Lawrenson said. "Collecting normal ovaries and fallopian tubes enabled us to map the molecular fingerprints of these specific cell types in a large cohort of women. This has enabled us to identify the features that relate to cancer risk in the correct tissue type."

The great challenge the researchers faced was dealing with the number of genes that are in one region of the genome, Pasaniuc said.

"Whenever you inherit a piece of DNA from your parents, you don't inherit just every base pair of the genome, you inherit big chunks," Pasanuic said. "That means that if you inherit a gene mutation in a given region, you inherit the entire region, which can carry 10 to 20 genes at a time. This makes it very hard to pinpoint specific genes from specific regions."

To help identify the genes in these particular regions, the team compared the large-scale genetic data from the Ovarian Cancer Association Consortium with a different data type that describes the expression of genes in ovarian and other tissues. By putting these two pieces of information together, the researchers were able to distinguish which genes in the genomes are actually the risk genes. Through this computational technique, the team identified 34 genes that are associated with an increased risk for developing ovarian cancer.

"With the identification of these genes, we now have a narrow list of genes that can help us better predict ovarian cancer risks in women who may have never known that they were at a higher risk for developing the disease," Pasaniuc said. "While we're not there yet, we're hoping this study will lead to better outcomes because we will be able to monitor women earlier, when the cancer is easier to treat."