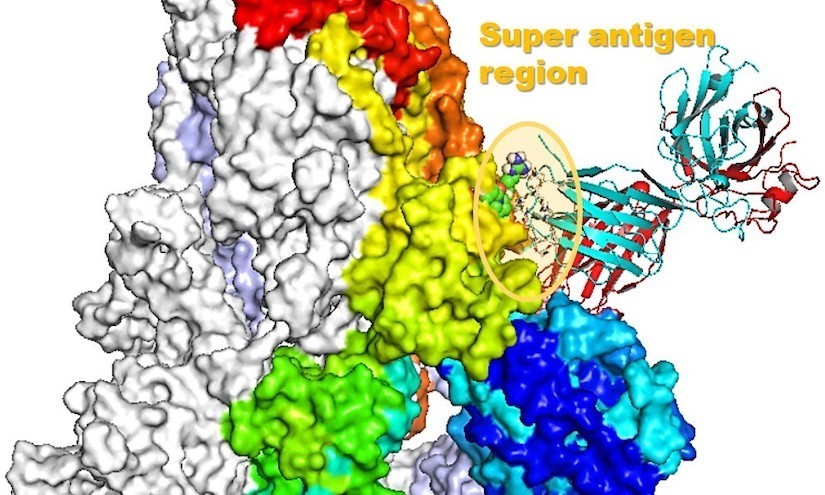 Moshe Arditi, MD, received the PRISM award for his seminal discoveries related to a syndrome that some children develop after becoming sick with COVID-19. Pictured here is a 3D structural model of the spike protein that lives on the surface of SARS-CoV-2, the virus that causes COVID-19, which may trigger the immune system to go into overdrive. Image courtesy of Ivet Bahar, PhD and Mary H Cheng, PhD.

A Cedars-Sinai physician-scientist who has made seminal discoveries related to a syndrome that some children develop after becoming sick with COVID-19 is the winner of this year's Cedars-Sinai Prize for Research in Scientific Medicine (PRISM).

Moshe Arditi, MD, executive vice chair of the Department of Pediatrics for Research, part of Cedars-Sinai Guerin Children's, has received the PRISM award­­—the highest honor bestowed by Cedars-Sinai. The prize recognizes a scientific breakthrough or critical medical insight made within the past five years by a Cedars-Sinai faculty member.

Arditi was presented with the award on June 22 during the 2022 commencement of the Cedars‑Sinai Graduate School of Biomedical Sciences.

"Dr. Arditi's discoveries have brought us closer to understanding—and preventing—the effects of COVID-19 in both children and adults," said Jeffrey Golden, MD, vice dean of Research and Graduate Education and director of the Burns and Allen Research Institute at Cedars-Sinai.

In 2020, Arditi and his longtime collaborator Ivet Bahar, PhD, described in a study published in the Proceedings of the National Academy of Science how a special type of molecular antigen on the spike proteins that live on the surface of SARS-CoV-2, the virus that causes COVID-19, may trigger the immune system to go into overdrive. Arditi and colleagues created a computer model showing how certain molecular motifs called "super antigens" on the spike proteins interact with immune cells to initiate the production of infection-fighting proteins known as cytokines. This interaction stimulates an overproduction of cytokines that mistakenly attack the body's organs. In pediatric patients, this complication is called multisystem inflammatory syndrome in children (MIS-C), and it may occur weeks after infection with SARS-CoV-2. Although rare, the condition can be deadly in some cases.

In another study, published in the Journal of Clinical Investigation in 2021, Arditi and colleagues identified biological signs that may signal the severity of MIS-C. The investigators have also discovered that children with MIS-C may have particles of SARS-CoV-2 in their gut long after becoming infected. Arditi and colleagues also hypothesize that the repeated exposures to the virus and the superantigenic motif may lead to autoimmunity not only in MIS-C, but also in patients with long COVID-19.

Arditi has served as director of the Pediatric Infectious Diseases Division at Cedars-Sinai for more than 20 years. In 2011, Arditi founded the Infectious and Immunologic Diseases Research Center at Cedars-Sinai. He is considered a foremost expert on Kawasaki disease, the leading cause of acquired heart disease in children.

"I am honored to receive this prize from an organization to which I have dedicated most of my career and which comprises so many talented clinicians and researchers," said Arditi, the GUESS?/Fashion Industries Guild Chair in Community Child Health and is a professor of Biomedical Sciences and Pediatrics at Cedars-Sinai.

Arditi directs an internationally recognized research program that investigates the workings of the immune system. Together with the help of other principal investigators in his lab, Arditi has translated basic science discoveries on Kawasaki disease and other diseases into improved patient care.

For his bench-to-bedside work, Arditi received the Pioneer in Medicine Award from Cedars-Sinai in 2019. He has authored more than 180 peer-reviewed studies and has received uninterrupted research funding from the National Institutes of Health since 1994.

The PRISM award was established in 2015 and is based on faculty nominations and an external selection committee. Winners receive a monetary prize and commemorative medal. Learn about past recipients.