Nurses aren’t just heroes at the bedside. Some have a lasting impact long after a patient goes home. Consider orthopaedic nurse Sandra (Sandy) Nahom—and the young amputee patient she helped inspire after a tragic accident.

That patient, 19-year-old Cooper Mulholland, was in Simi Valley, riding his motorcycle on his way to lunch, when he was struck by a car in April 2021.

The accident severely mangled his right leg, dislocating his knee. Mulholland was taken to Cedars-Sinai, where his leg was amputated above the knee.

"In every sort of way you can imagine a mangled leg, this really fit the definition," said Charles Moon, MD, director of the Orthopaedic Trauma Program, who performed the surgery.

From Tragedy to Opportunity

That's where Nahom stepped in. Where many would see tragedy, she saw an opportunity to spark hope for her patient, a former varsity 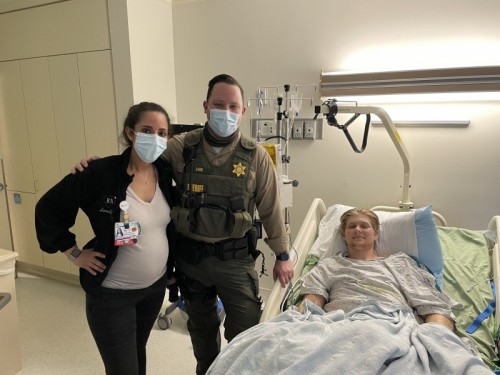 Mulholland told Nahom that he had recently finished an emergency medical technician training program and was looking to get hired as a firefighter in the near future—but thought his dream was done because of his amputation.

Nahom didn't miss a beat. She called in a favor from a former amputee patient, Los Angeles County Sheriff Deputy Garrett Rifkin. He also had lost part of a leg, in a motorcycle accident three years ago, and was treated by Moon and Nahom.

The plan was set: Nahom would arrange a meeting in the hospital between Rifkin, the sheriff's deputy, and Mulholland, the aspiring firefighter.

"An amputation is very scary, especially for a teenager, but I knew that we'd had patients in the past who were able to continue on with their careers," Nahom said.When Rifkin walked into the hospital room, Mulholland wasn't sure why someone in a sheriff's uniform was visiting him. Once Mulholland realized that he and Rifkin were both missing parts of their legs, he smiled broadly and felt a sense of hope for the first time since his accident. "It was really incredible to witness," Nahom said.

"Meeting Garrett was really helpful because he gave me a lot of information about recovery and what to expect," Mulholland said. "He also said his life is not much different now than before and that I can still reach any of my goals."

Mulholland said he will never forget what Nahom did for him.

"Nurse Sandy was an amazing person; she just really helped me out," he said. "She was just always there."

"We were all just amazed because we had just met her and she went above and beyond," she said. "It was just the best feeling because it made us feel like she really cared."

Rifkin, the sheriff's deputy, said the visit was his way of paying back those who literally helped get him back on his feet three years ago, allowing him to return to the law enforcement career he loves.

"When I left the seventh floor at Cedars-Sinai and returned to work, I gave them my business card with an open-ended deal to contact me if anybody ever needed help and encouragement, because that's what was done for me, and that's what I wanted to repay," Rifkin said.

"I've been able to help more people by being an amputee than I ever would have just being a cop," Rifkin added. "I'm a firm believer that everything happened for a reason. If I lost my leg to help other people through their journey, then that's why I lost my leg in my accident."

Today, one month after leaving the hospital, Mulholland is getting his life back on track with the help of his family and friends. He works out daily to build his strength to get ready for his prosthesis. Moon, his surgeon, said that Mulholland is a strong candidate to do well with a prosthetic leg.

Mulholland said he, too, hopes to be part of Nurse Sandy's pay-it-forward roster and be called upon to help encourage other amputee patients. In the meantime, he is enrolled at Oxnard College, where he plans to pursue a career in fire technology.

"My end goal," he said, "is to just be the best firefighter I can be, because having a prosthetic leg or any amputee part on your body shouldn't stop you from doing what you want to do."

The first rule of sun safety is to start young."When it comes to kids and sun-safety habits, it’s essential to start early and to model the behaviors we want our children to use throughout life," said Tracy Zaslow, MD, pediatric sports medicine …
Share this release (opens in dialog)

Behind orthopaedic nurse Paulina Andujo' s contagious smile lies not only a compassionate caregiver but also a unique talent."I DJ on the side; it's my creative outlet," Andujo said. "It's my therapy."Growing up in Sunray, Texas, a rural town with a …
Share this release (opens in dialog)

Like many collegiate athletes, Dahlia Fink, 18, was introduced to sports at a young age.  "When she was 4 years old, I took her to a baseball clinic at the park, and that was when she first started playing," said Dahlia's father, Christopher Fink. …
Share this release (opens in dialog)