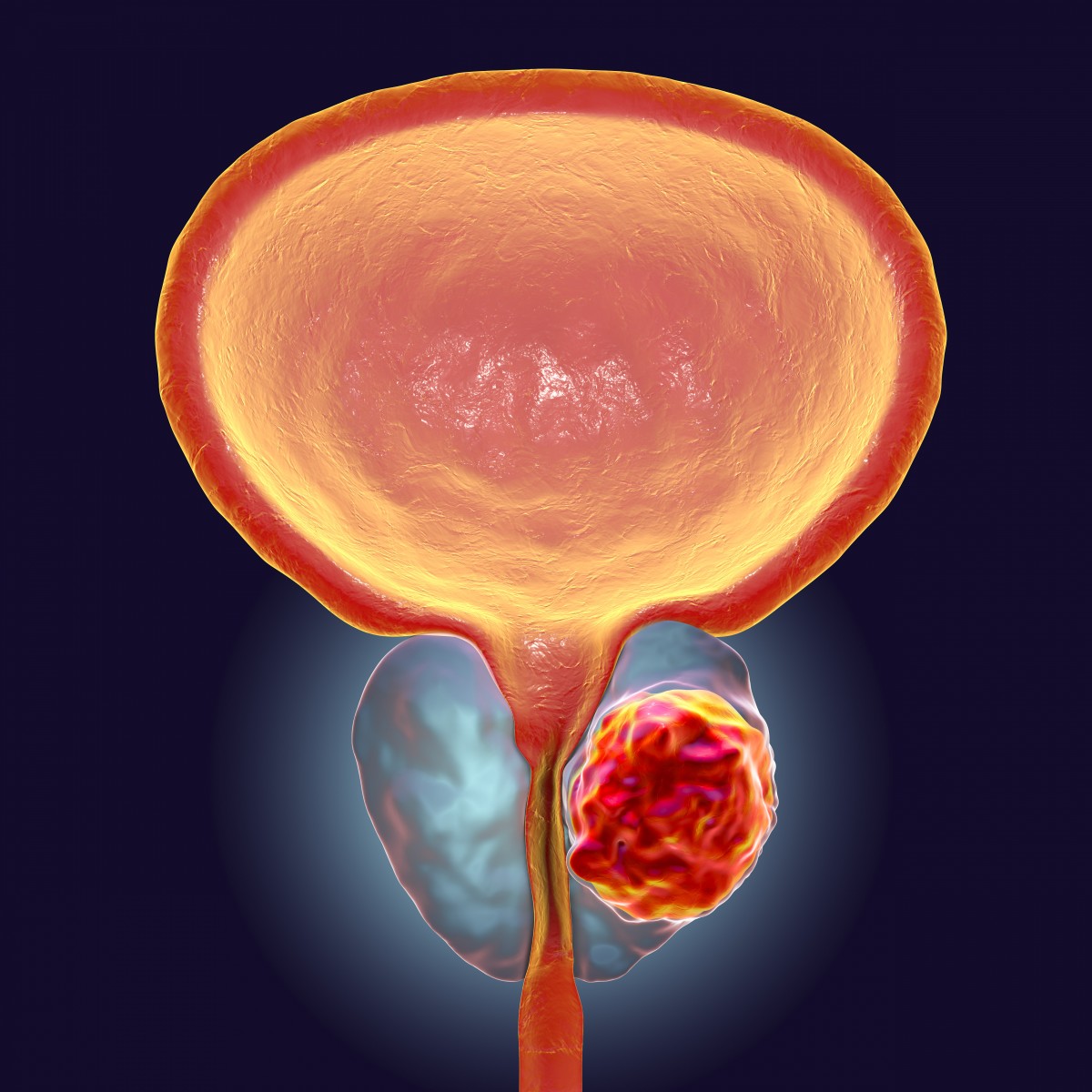 Prostate cancer cells are depicted in the circle on the lower right. Illustration by Getty Images.
Prostate cancer. Computer illustration of a cancerous tumour (centre right) in the prostate gland (transparent, centre). The urethra can be seen running down the centre of the prostate, from the bladder (top). Prostate cancer is one of the most common male cancers, usually affecting the elderly. The growth of a prostate tumour can obstruct the neck of the bladder, impairing urination. However, it is a slow-growing cancer. If diagnosed, treatment involves surgery to remove the prostate gland, or radiotherapy. Recent researches show the link between prostate cancer and infection of viruses, such as human papilloma virus (HPV) and Epstein Barr virus (EBV), therefore, one of promising treatment methods is also the use of antiviral agents.

Scientists at Cedars-Sinai have discovered how prostate cancer can sometimes withstand and outwit a standard hormone therapy, causing the cancer to spread. Their findings also point to a simple blood test that may help doctors predict when this type of hormone therapy resistance will occur.

Prostate cancer is the second-leading cause of cancer death in men, behind lung cancer, killing nearly 30,000 in the U.S. each year, according to the American Cancer Society. In its early stages, the most common type, adenocarcinoma, is curable and generally responds well to therapies, including those that target androgen—a male sex hormone that stimulates tumor growth.

However, in certain patients, the cancer becomes resistant to androgen-targeted therapy, and the cancer recurs or spreads. One possible reason for that resistance, the study indicated, appears to be that the therapy causes some adenocarcinoma cells to become neuroendocrine cancer-type cells—a rare type that normally appears in fewer than 1 percent of prostate cancer patients.

"This transformation is a problem because neuroendocrine prostate cancer is especially aggressive, metastasizes more readily and is more resistant to both androgen-targeted therapy and chemotherapy," said Neil Bhowmick, PhD, co-director of the Cancer Biology Program at the Samuel Oschin Comprehensive Cancer Institute at Cedars-Sinai. He is senior author of the study, published in The Journal of Clinical Investigation, and Rajeev Mishra, PhD, former project scientist in his laboratory, is the lead author.

Bhowmick said about a fourth of the patients who receive androgen-targeted therapy may relapse with tumors that show features of neuroendocrine prostate cancer and develop treatment-resistant disease, according to published research.

“While glutamine is known to spur cancer growth, its role in prostate cancer cells to trigger reprogramming of adenocarcinoma cells into neuroendocrine cancer cells is a new and important finding," said Roberta Gottlieb, MD, professor of Medicine and vice chair of translational medicine in the Department of Biomedical Sciences at Cedars-Sinai. Gottlieb was a co-author of the study.

"To our surprise, we found this type of therapy further changed the cellular environment in a way that caused adenocarcinoma cells in the prostate to transform into neuroendocrine cancer-type cells," said Bhowmick, professor of Medicine and Biomedical Sciences.

This finding has potential implications for treating prostate cancer patients, said Edwin Posadas, MD, co-director of the Translational Oncology Program at the cancer institute and associate professor and clinical chief of the Division of Hematology/Oncology in the Department of Medicine at Cedars-Sinai.

"The study raises the possibility that a simple blood test measuring glutamine might be able to pinpoint when androgen-targeted therapy is failing in a prostate cancer patient and even predict when therapy resistance will occur," said Posadas, who co-authored the study. He said the team is designing a new study to test this hypothesis.

The Path to Heart Failure Is Different for WomenNew research from the Smidt Heart Institute shows for the first time that the path toward heart failure differs for women and men. The important findings—discovered using a novel cardiac imaging …
Read more