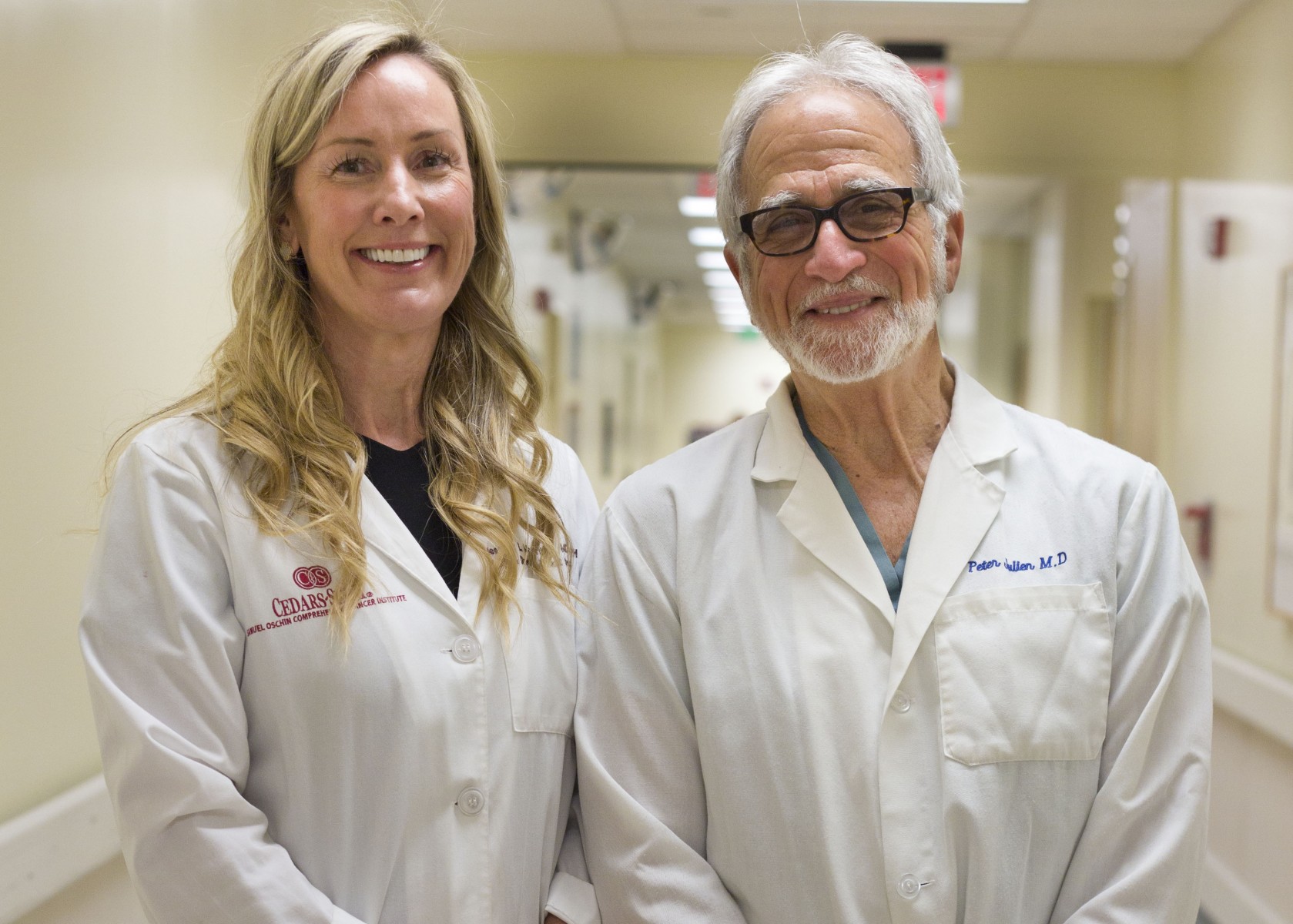 When Jeanne Anderson was diagnosed with breast cancer three years ago, the Beverly Hills resident underwent a course of chemotherapy to shrink the tumors in preparation for surgery. But thanks to a minimally invasive procedure that kills cancer cells by freezing them, she was able to avoid the risks and recovery time of surgery, and she now is cancer-free.

Anderson was referred to oncologist Aron Bick, MD, after her gynecologist detected a breast lump in June 2016. Imaging studies confirmed the existence of a single tumor on the left breast, and Anderson underwent a course of chemotherapy to shrink the tumor, which was to be surgically removed later.

Because Anderson had a small, early-stage, low-risk tumor, Bick consulted with interventional radiologist Peter J. Julien, MD, chief of Thoracic Imaging and Tumor Ablation at the S. Mark Taper Foundation Imaging Center at Cedars-Sinai, and Anderson was offered the cryoablation procedure as an alternative to surgery. Recent studies have suggested that the procedure may be effective in treating women with low-risk breast cancers.

"I have always been interested in acupuncture, Pilates, yoga and holistic medical cures—things that people might think of as alternative medicine," said Anderson, who had read about cryoablation techniques for breast cancer treatment. "When my oncologist told me about this procedure, I was intrigued because it's not traditional, and I figured I had nothing to lose."

Cryoablation therapy, typically done on an outpatient basis, takes less than an hour, with patients usually returning to their normal activities shortly thereafter. The procedure uses extreme cold—averaging minus 150 degrees Celsius, or 238 degrees below zero Fahrenheit—to destroy cancer cells and close off the blood vessels that feed them. Julien uses CT or ultrasound guidance to precisely place a tiny probe for treatment, using only local anesthesia as needed. Liquid nitrogen is introduced through the probe, forming an ice ball around the tumor and killing the cancer. Unlike ablation techniques that use heat, cryoablation is considered less likely to cause damage to surrounding breast tissue and skin.

A preliminary study presented last year at the annual meeting of the Radiological Society of North America showed "early indications of effectiveness in treating women with low-risk breast cancers." According to the researchers, there was only one case of recurrence out of 180 patients over the course of the four-year study.

Anderson, who was not a participant in a clinical trial, was the first patient at Cedars-Sinai to undergo the cryoablation procedure for breast cancer. A former interior designer and a past president of the Robinson Gardens Tour at the Virginia Robinson Gardens in Beverly Hills, she now volunteers full-time as a garden conservatory plant collector, attending shows and garden tours around the world. A member of the Cedars-Sinai Board of Governors, Anderson also volunteered to help battered women and children at The Good Shepherd Shelter.

Read more on the Cedars-Sinai Blog: Blindsided by Breast Cancer: A Patient’s Advice

On a recent morning, Wendy Lawson attended an exclusive live performance of “Le Cygne” (The Swan) by composer Camille Saint-Saëns, a piece of classical music known for its use in ballet. But …
Read more

A new approach to cancer therapy shows potential to transform the commonly used chemotherapy drug gemcitabine into a drug that kills cancer cells in a specialized way, activating immune cells to …
Read more

Natalie Coehlo wasn’t concerned at first about the sudden rash on her left breast last December. Six months later, though, when the rash had morphed into sores, she visited her primary care physician …
Read more