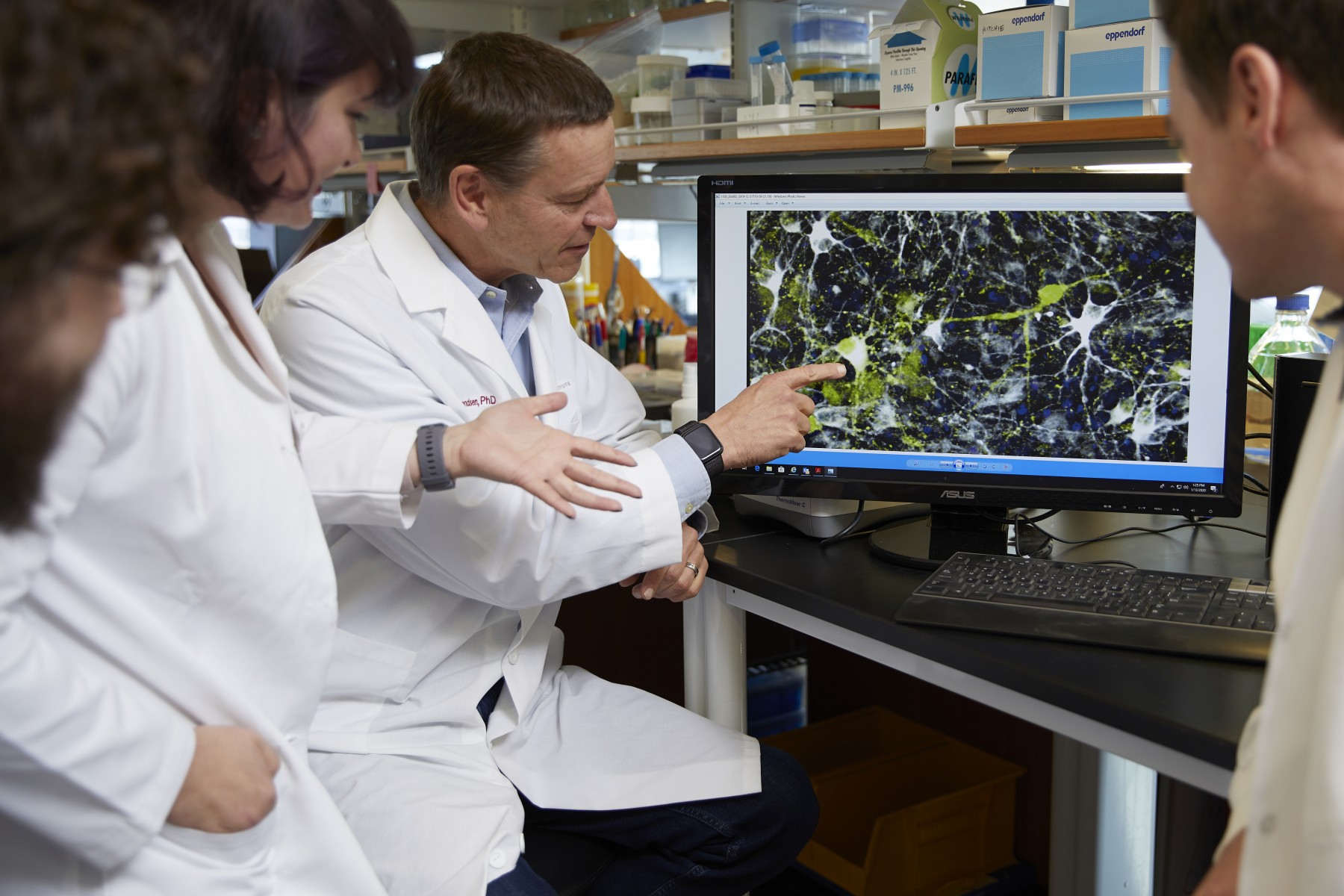 Clive Svendsen, PhD, points to a photo of neurons during a discussion with his team. Photo by Cedars-Sinai.

ALS, or Lou Gehrig's disease, is a progressive neurodegenerative disease that damages nerve cells known as motor neurons in the brain and spinal cord that control voluntary muscle movement. It affects an estimated 16,000 people in the U.S. and is usually fatal within five years of diagnosis. There is no known cure and only limited treatments that may slow progression in a subset of patients.

The award from the California Institute for Regenerative Medicine (CIRM) builds on earlier support from the stem cell agency enabling Cedars-Sinai to investigate the use of stem cells delivered to the spinal cord to treat ALS patients.

"We are extremely grateful for CIRM's support of our ALS work over many years," said Clive Svendsen, PhD, executive director of 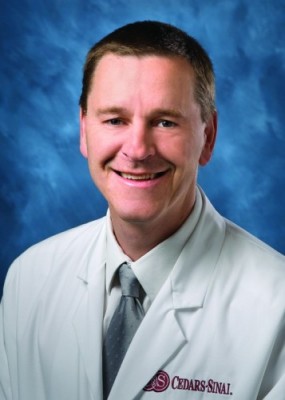 the Cedars-Sinai Board of Governors Regenerative Medicine Institute and professor of Biomedical Sciences and Medicine. "This disease remains a remarkably stubborn and heartbreaking disorder. The new grant allows us to follow the science wherever it takes to best serve our patients."

Svendsen leads this new project, which is designed to transplant neural progenitor cells secreting a powerful growth factor into the brain cortices of ALS patients. Aided by the CIRM grant, Cedars-Sinai plans to enroll 16 patients in the clinical trial to demonstrate the safety and preliminary efficacy of using the neural progenitor cells to slow progression of ALS.

The neural progenitor cells for the trial have been genetically reprogrammed to express GDNF, a protein that promotes survival of special cells called astrocytes that support motor neurons. In ALS patients, astrocytes may become sick and provide less support to motor neurons, which then gradually die, leading to paralysis.

The trial's investigators, from the Regenerative Medicine Institute and the departments of Neurology and Neurosurgery at Cedars-Sinai, hypothesize that the engineered neural progenitor cells, when introduced into the brain cortices of ALS patients, will differentiate into astrocytes and secrete GDNF locally to keep the motor neurons healthy and ultimately slow the progression of ALS. The trial's clinical leads are Adam Mamelak, MD, professor of Neurosurgery, and Richard Lewis, MD, professor of Neurology. The project leader is Pablo Avalos, MD, a research scientist in Svendsen's laboratory.

The design of the trial builds on many years of research at Cedars-Sinai that demonstrated a similar technique delayed disease progression and extended survival in rodent models of ALS.

Currently, investigators from the Cedars-Sinai Board of Governors Regenerative Medicine Institute are analyzing data from a Food and Drug Administration-approved clinical trial that infused these same cells into the spinal cords of ALS patients. That trial, and the research that laid the groundwork for it, also was funded by CIRM.

Disclosure: Pablo Avalos, MD, is an inventor on a patent application filed by Cedars-Sinai Medical Center related to the device (injection cannula) being used in this study.

In Recognition of ALS Awareness Month, Lall Shares Why She’s Optimistic About Scientific Advances for This Fatal Disease

Treating pregnant women with opioid use disorder can help minimize opioid-related brain abnormalities in their newborns.Led by scientists at Cedars-Sinai, this is the first study to report evidence validating the benefits of using medication for …
Share this release (opens in dialog)