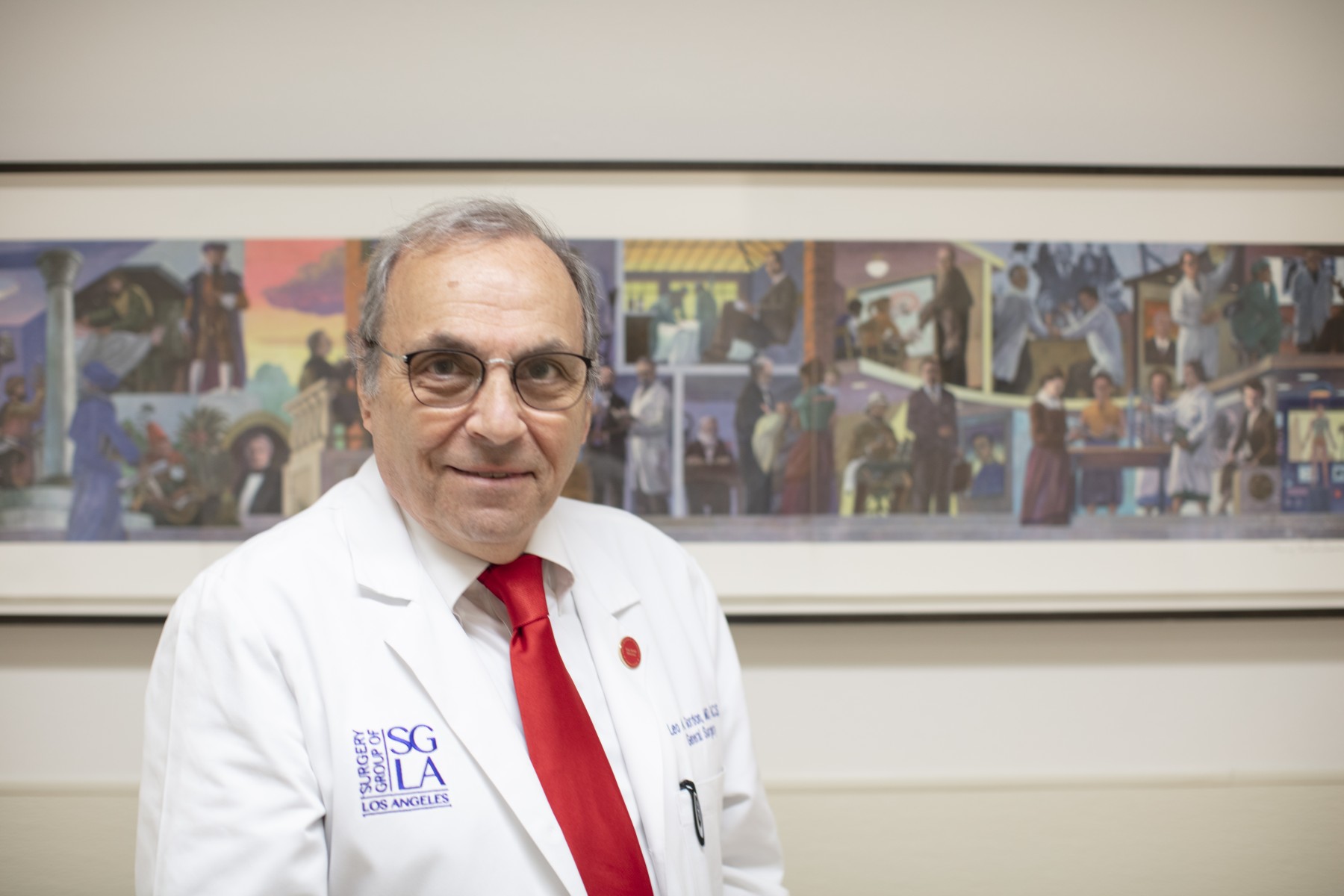 Leo A. Gordon, MD, stands in front of an artwork by Terry Schoonhoven that depicts the history of Jewish medicine and includes the founder of a clandestine medical school that operated in the Warsaw Ghetto during the Holocaust. The work of art also was made into a mural that adorns the medical center's auditorium. Photo by Cedars-Sinai.

As death closed in on the Jews of the Warsaw Ghetto during World War II, some of those coping amid the wretched conditions affirmed life in an extraordinary way: They operated a clandestine medical school.

By one estimate, as many as 500 students received some medical education through the school while it operated for 15 months from 1941-1942. Only a small number, at most a dozen, survived the massive deportations to death camps that began in July 1942, the destruction of the ghetto in May 1943 and the rest of the Holocaust.

Yet for Leo A. Gordon, MD, a surgeon on the Cedars-Sinai staff for 40 years, the short-lived secret school endures as a source of inspiration.

The secret school never had an actual name. But Gordon calls it "The Impossible Medical School."

For Gordon, the medical school story is an apt way to recognize Yom Ha'Shoah —also known as Holocaust Remembrance Day—on May 2. It's also a key part of the history of of the Jewish Contributions to Medicine mural by artist Terry Schoonhoven in Harvey Morse Auditorium.

Gordon has been captivated by the story of the medical school since learning about it while serving on the Cedars-Sinai committee that grappled with how the mural should represent the Holocaust. The group ultimately decided to show a heroic Polish Jewish doctor, Janusz Korczak, who refused to abandon the 200 children in a Warsaw Ghetto orphanage. Korczak wound up being taken to Treblinka and murdered, along with the orphans.

While doing research on Korczak, Gordon said he came across "just half a sentence, just a snippet" about the clandestine medical school. "And, for some reason, it just stuck with me."

The school was an exception to the general clampdown by the Nazis on education in the Warsaw Ghetto. The Nazi authorities—apparently motivated by a fear that Jews were especially vulnerable to typhus—approved instruction intended for sanitation workers, who would be taught to fight typhus by burning clothing and cleaning rooms with disinfectants. Using that low-level technical program as a cover, doctors operating the school developed a full-fledged program to train future physicians. But to fool anyone who might be spying on them, they would do things such as leaving behind disinfectants and public health leaflets after class. "It was brilliant," Gordon said.

Gordon cited a seminal paper about the school by a Canadian medical historian, the late Charles G. Roland, MD, that described deplorable conditions in the ghetto hospitals. Roland noted that students sometimes were raped or beaten while walking to classes.

One student who survived and went on to practice medicine in the United States remembered that, "We would have one day a lecture at one o'clock and the teacher wouldn't show up. A few days later we would find out that he was killed."

Yet in his 1989 paper, nearly a half-century after the school operated, Roland found that some of the smattering of students who survived the Holocaust were still practicing medicine.

The physicians who ran the school and their students persisted by clinging to the hope that the persecution they were enduring was no worse than what previous generations of European Jews had survived. "Some people in the ghetto knew that, for hundreds of years before this event, there were cyclical pogroms in Europe," Gordon said. "They all ended eventually. Many said, 'This is just another pogrom. It's tough. We're going to get through it.'"

As the nation heads into the second Jewish High Holiday season during the COVID-19 pandemic, Cedars-Sinai Senior Rabbi and Director of Spiritual Care Jason Weiner, PhD, is thinking about renewal, a common theme during the holidays that call for …
Read more

For Cedars-Sinai's longstanding commitment to providing medical care and other support to survivors of the Holocaust, President and CEO Thomas M. Priselac has received the Outstanding Humanitarian Award from the American Society for Yad …
Read more

This Rosh Hashanah, even the shofar will be wearing a mask. That is just one of the unconventional ways that the COVID-19 (coronavirus) pandemic is changing the way Rabbi Jason Weiner, PhD, and his team of chaplains at Cedars-Sinai will be …
Read more