WebMD: When You Have Two Separate Cancers 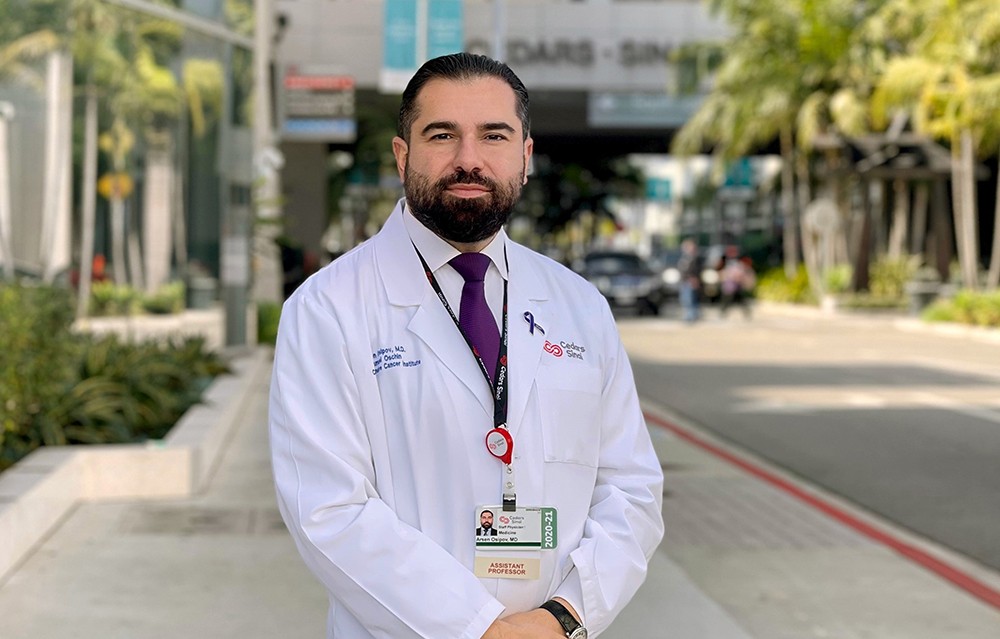 Finding out whether a patient has two primary cancers versus a single cancer that has metastasized is critically important, says Cedars-Sinai oncologist and researcher Arsen Osipov, MD. Photo by Cedars-Sinai.

WebMD recently interviewed Arsen Osipov, MD, program lead in the Pancreatic Cancer Multidisciplinary Clinic and Precision Medicine Program at Cedars-Sinai Cancer, for a story featuring one of his patients who was diagnosed simultaneously with both pancreatic cancer and lung cancer. The article explores whether it’s common for people to be diagnosed with two separate cancers as opposed to one cancer that has metastasized, and what to do in such a challenging situation.

“Finding out whether a person has two primary cancers versus a single cancer that has metastasized is critically important,” said Osipov, also a medical oncologist and researcher in the Gastrointestinal Research Group at Cedars-Sinai Cancer.

Referring to the patient he treated, he told WebMD, “It could have been assumed that she had metastatic pancreatic cancer, but actually she had two separate cancers that could each be treated definitively with the intention to cure. You take care of one, then the other, and those cancers are not as advanced as a single cancer with metastasis would have been.”

A biopsy and genetic sequencing of both tumors can tell doctors whether they are looking at one cancer or two.

In the WebMD article, Osipov recommended that people with two simultaneous primary cancers get care at a cancer center, where a multidisciplinary team including oncologists, surgeons, radiologists and pathologists all can work together. A team of oncologists specializing in those cancers can determine which one to treat first.

Although unusual, two cancers may share characteristics that would make them respond to the same targeted drug or chemotherapy regimen. “This would be an ideal scenario, but it’s very rare,” Osipov told WebMD.

Click here to read the complete article from WebMD.

WebMD: When You Have Two Separate Cancers