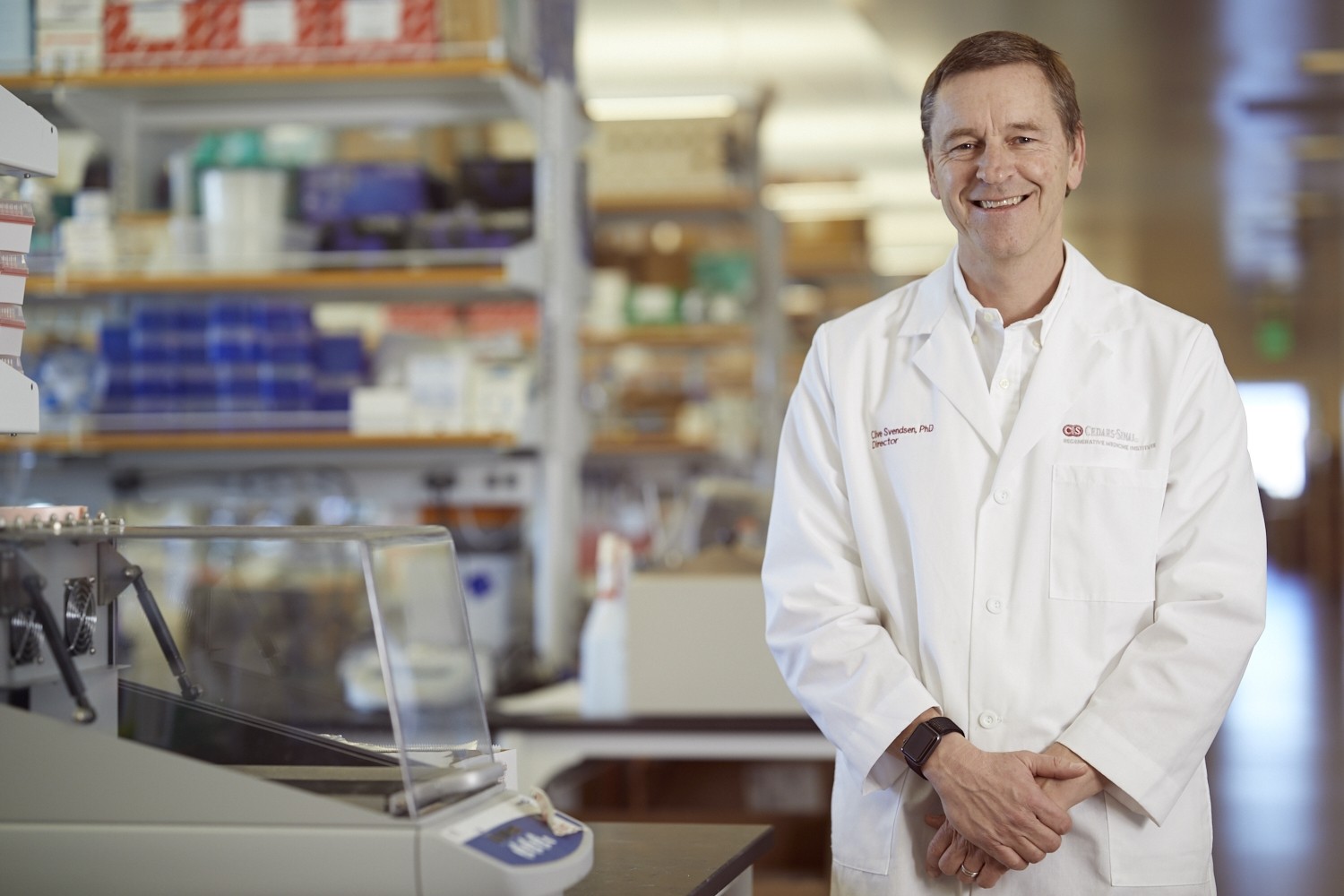 Clive Svendsen, PhD, in his lab at the Cedars-Sinai Board of Governors Regenerative Medicine Institute. Photo by Cedars-Sinai.

Cedars-Sinai investigators have received funding to launch a clinical trial to test the safety of using stem-cell technology as a potential treatment for retinitis pigmentosa, an inherited eye disease with no known cure. The trial, approved by the Food and Drug Administration earlier this year, has been awarded $10.5 million by the California Institute for Regenerative Medicine (CIRM), the state-funded stem cell research institute.

The principal investigator for the CIRM grant is Clive Svendsen, PhD, professor of Biomedical Sciences and Medicine and director of the Cedars-Sinai Board of Governors Regenerative Medicine Institute. November has been a significant month for Svendsen, who received another grant, for $1.5 million, from The Paul G. Allen Frontiers Group, a division of the Allen Institute. He was one of five recipients of this year's Allen Distinguished Investigator awards. The funds will allow Svendsen's team to study the role of the gut microbiome in Parkinson's disease.

The $10.5 million CIRM grant for the retinitis pigmentosa trial follows many years of promising preclinical research on this disease led by Shaomei Wang, MD, PhD, professor of Biomedical Sciences and a research scientist in the Eye Program at the Board of Governors Regenerative Medicine Institute.

Retinitis pigmentosa gradually destroys the photoreceptor cells of the retina — the structure in the back of the eye that detects light. The disease, believed to affect more than 80,000 people in the U.S., typically manifests as poor night vision early in life and progresses to legal blindness in adulthood.

The clinical trial involves injecting a cortical progenitor cell product known as CNS10-NPC into the eye. Progenitor cells, descendants of the body's stem cells, can make certain other cells. In tests with laboratory animals, Wang and her colleagues showed that these injected cells migrated and formed a new layer of cells adjacent to the photoreceptor cells. These new cells slowed degeneration of the retina and preserved vision.

The FDA has authorized up to 16 retinitis pigmentosa patients to participate in the clinical trial. In each patient, one eye will receive injected progenitor cells and one will not. Vision in the two eyes then will be compared and the overall safety evaluated. "We want to sure make the injections do not have unwanted side effects, such as surgical complications or an immune reaction," Svendsen said.

The clinical principal investigator for the trial will be ophthalmologist David Liao, MD, from the Retina-Vitreous Associates Medical Group in Beverly Hills, who will perform the injections and assess the patients' vision in the treated and untreated eyes. “We are very excited about this trial and this novel cell-based approach to a devastating disease,” Liao said. The clinical-grade progenitor cells have been manufactured at the City of Hope Center for Biomedicine and Genetics in Duarte, California.

The preclinical research, which led to FDA approval of the trial, was funded by a $4.9 million grant from CIRM. With the receipt of this latest CIRM grant, investigators will be able to launch the Phase I/IIa clinical trial after their study protocol receives final institutional review.

"Throughout our years of painstaking research on retinitis pigmentosa, CIRM has been a steady partner and supporter of our work," Svendsen said. "This $10.5 million award will propel us into the next phase of our effort by allowing us to move forward with a clinical trial."

Cedars-Sinai investigators have developed an investigational therapy using support cells and a protective protein that can be delivered past the blood-brain barrier. This combined stem cell and gene …
Read more

Investigators at Cedars-Sinai and the University of California, San Francisco (UCSF) have identified a component in the intestine that plays a critical role in repairing damaged tissue.Scientists …
Read more