$9.1 Million Federal Grant to Focus on 'Cross-Talk' Between Liver and Cancer Cells That Prompts Liver Metastasis 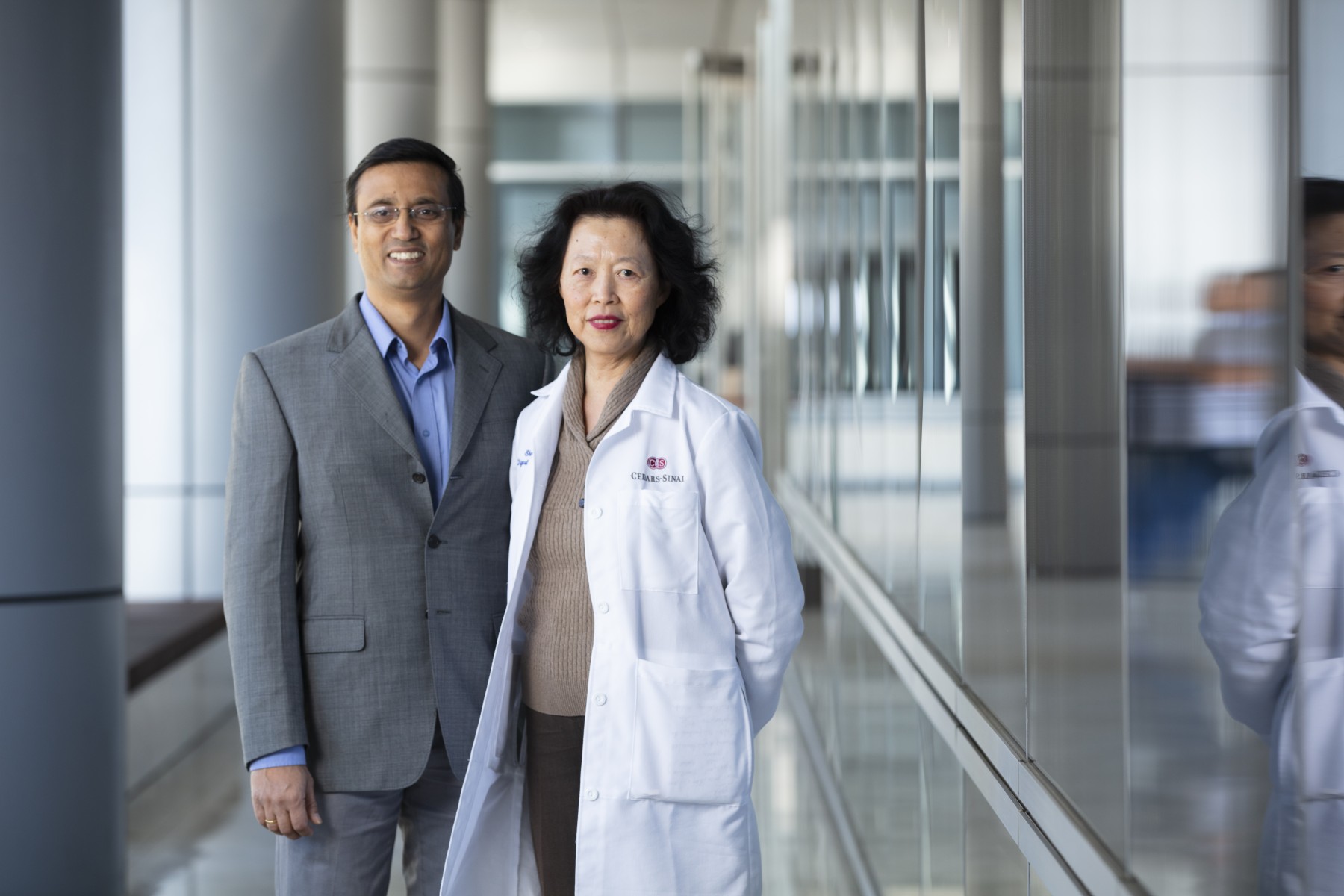 Neil Bhowmick, PhD, and Shelly Lu, MD, are studying the role of fat when cancer in one part of the body spreads to the liver. Photo by Cedars-Sinai.

A diagnosis of pancreatic or colon cancer often sparks dread about the disease's likely next destination: the liver. That's because liver metastasis is a leading cause of death in these patients.

A Cedars-Sinai scientific team has been awarded a $9.1 million grant by the National Cancer Institute to study this often-fatal process, with the goal of understanding how cancer spreads, or metastasizes, to the liver and finding ways to block it. The team will focus on the interplay between dietary fat and fatty liver disease – which is commonly associated with obesity – and the mechanisms that allow cancer to spread to the liver.

The liver is the second-most common site, after lymph nodes, to which cancer spreads. The majority of patients that die of pancreatic, colon or prostate cancer develop liver metastases at the time of death, said co-lead investigator Neil Bhowmick, PhD, director of the Cancer Biology Program at Cedars-Sinai. While the liver is the primary organ of metastasis from pancreatic and colon cancers, the relatively rare incidence of prostate cancer metastasis to the liver has the worst outcome. The liver – whose primary function is to filter the blood coming from the digestive tract, detoxify chemicals, metabolize drugs and excrete bile – plays a role in other cancers as well.

"There is already evidence that having fat in the liver promotes primary cancer there," said study co-lead investigator Shelly Lu, MD, Women's Guild Chair in Gastroenterology and director of the Division of Digestive and Liver Diseases. She and the other investigators, working on four separate projects, will study how signaling, or "crosstalk," between the liver and cancer in a distant organ alters the liver environment to allow cancer to spread and thrive there.

The liver in the context of a high-fat diet may, for example, send a signal to cancer cells in the prostate gland that in effect says, "This is a great place to live," Bhowmick explained. Cancer cells also "talk" to the liver, seeking to move there for the better blood circulation or nutrients that the liver, and specifically fatty liver cells, may provide. Every person's liver has some fat, but if more than 5% of hepatocytes – the main cell type in the liver – contain fat, that condition is called nonalcoholic fatty liver disease.

"We're looking at the crosstalk in three cancer types," said Bhowmick, referring to cancers of the pancreas, colon and prostate. "If we can help block those signals, perhaps we can prevent the cancer from ever getting to the liver and reduce mortality from the disease."

The five-year study funded by the grant is timely. Obesity poses a major health threat – more than 71% of U.S. adults ages 20 and older are overweight or obese, according to the federal Centers for Disease Control and Prevention. About 90% of obese people have a fatty liver.

The four projects funded by the grant will focus on short-term, longer-term and lifelong intakes of fat and how that exposure may raise the risk of liver metastasis. They also will examine the distinct ways in which the liver and distant cancer cells communicate, driving metastasis. The projects are:

Project 1: Bhowmick's team will study how a short-term high-fat diet alone – before fat develops in the liver – alters the signaling pathways to make the organ more welcoming to metastatic cancer.

Project 2: Ekihiro Seki, MD, PhD, professor of Medicine and director of Basic Liver Research, and his team are examining the effects of longer-term high-fat diets and nonalcoholic fatty liver disease on liver metastasis. Their focus is on how the fatty liver cells influence the non-fatty liver cells and cancer cells, allowing the cancer cells to grow there.

Project 3: Stephen J. Pandol, MD, professor of Medicine and director of Basic and Translational Pancreas Research, and his team will study the role fatty liver has on inflammation and its influence on liver metastasis from pancreatic cancer. They're examining a specific signaling pathway – a chain reaction of molecules – that controls how cells behave. A particular pathway present in pancreatic cancer liver metastasis is being examined in colon and prostate cancer.

"We are grateful for the generous support of the National Institutes of Health, which will help our expert team of scientists and clinicians break new ground as they learn why certain cancers inevitably spread to the liver, and find ways to halt that process," said Shlomo Melmed, MB, ChB, executive vice president of Academic Affairs and dean of the Medical Faculty at Cedars-Sinai.

Funding: Research for this study is supported by the National Cancer Institute of the National Institutes of Health under award number 1P01CA233452-01A1.

Read a firsthand story about metastatic colon cancer on the Cedars-Sinai blog: Colon Cancer Patient Lori Wants You to Learn from Her

Cedars-Sinai is one of many Los Angeles area hospitals experiencing blood product shortages this month, and experts are encouraging prospective donors to roll up their sleeves and give in honor of …
Read more