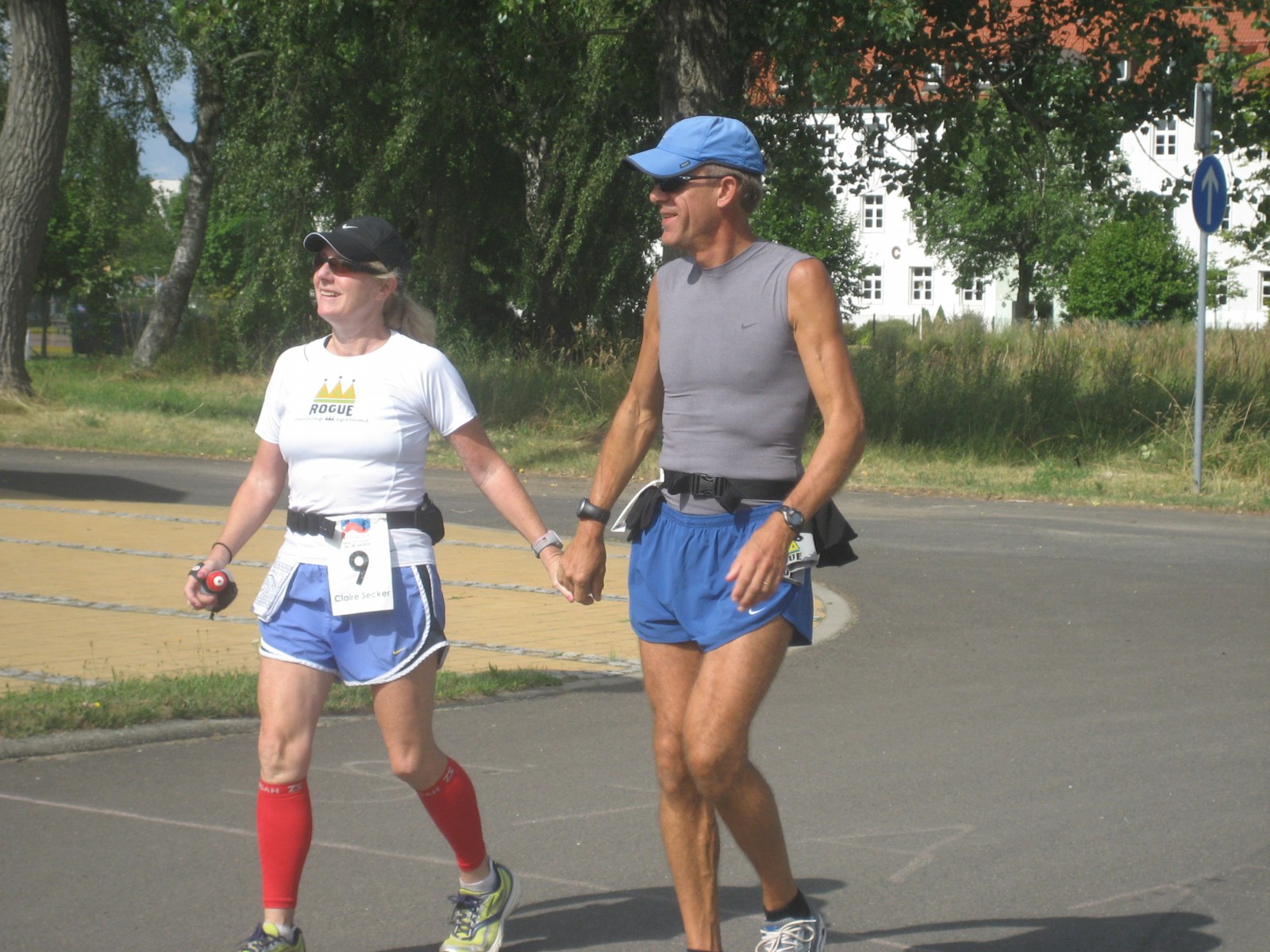 Claire and Russell Secker warm up for a race. Photo courtesy of the Secker family.

A Cedars-Sinai Surgeon Repairs a Rare Cerebrospinal Fluid Leak, Reversing the Patient’s Dementia and Getting Him Back to His Life

Russell Secker, now 67, was in Lake Tahoe in 2016 to run a series of ultra-distance races with his wife, Claire. The two had completed hundreds of marathons and races totaling thousands of miles. But this time was different. A terrible headache and shortness of breath took Russell, a native of England, out of the running.

“It was a multiday race and he did just one day, not even the full race, and when he finished, he was just gray,” said Claire. “He looked awful. He felt awful. We were a bit worried about it, but we just thought maybe it was the altitude.”

What the Seckers didn’t know was that Russell had a cerebrospinal fluid (CSF) leak, and that his symptoms were just beginning. It took a 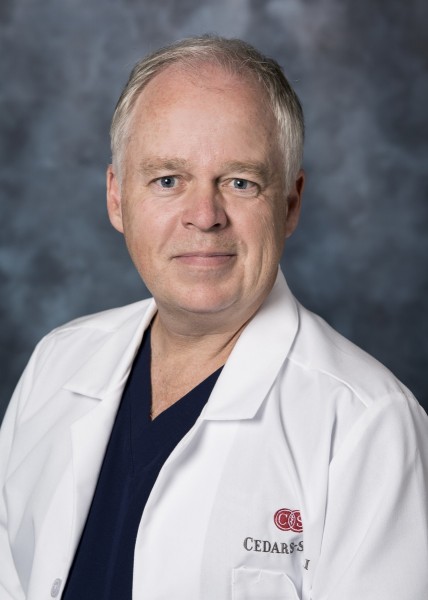 marathon journey through the British health system before he reached Wouter Schievink, MD, director of the CSF Leak Program at Cedars-Sinai, who used a novel technique to find and repair the leak and give Russell his life back.

Cerebrospinal fluid flows in and around the brain and spinal cord to cushion them against injury. The fluid is contained by a layer of tissue called the dura, and a hole or tear in the dura can allow this fluid to leak out. A tear can be caused by an injury or, rarely (roughly 16,000 cases per year in the U.S.), on its own.

“If the leak is substantial enough, there's not enough fluid to keep the brain afloat, and the brain sinks or sags,” said Schievink, who has treated more than 2,000 patients from across the globe with CSF leak. He’s one of the world’s foremost authorities on the condition and has more than 20 years’ experience at Cedars-Sinai. “The brain can rest on the skull base or it can actually sink a little bit into the spinal canal.”

Headache is usually the first symptom, but as the “sinking brain” becomes more compressed, other symptoms develop.

After the Lake Tahoe event and before they found Schievink, the Seckers flew back to England and spent most of the next three years searching for answers. Russell’s headaches persisted and he began sleeping up to 20 hours a day. He lost his sense of balance, taste and smell and had difficulty swallowing. He also developed dementia symptoms that terrified Claire and the Seckers’ adult children—a daughter in England and sons in Austin, Texas, and Denver, Colorado.

“We were having these little huddles, saying, ‘We're going to have to put him in a home,’” Claire said. She had to take away Russell’s car keys and passport and disable their home Wi-Fi.

“He went online to rent a motorcycle so he could cycle around India,” Claire said. “He booked us on a 90-day cruise without telling me and got us locked out of our online bank accounts by putting in the wrong passwords. He would be in bed with a headache, and I would leave the house to go to the gym or the grocery store, and when I’d come back, he’d be gone and later found by passersby on the side of the road.”

At their local hospital, CT scans ruled out a brain tumor, but failed to pinpoint the problem. Russell said his memory of that time isn’t clear.

“It's like shards of broken glass,” Russell said. “I knew I was very unwell. I felt suicidal. I remember talking to our son-in-law at Christmas 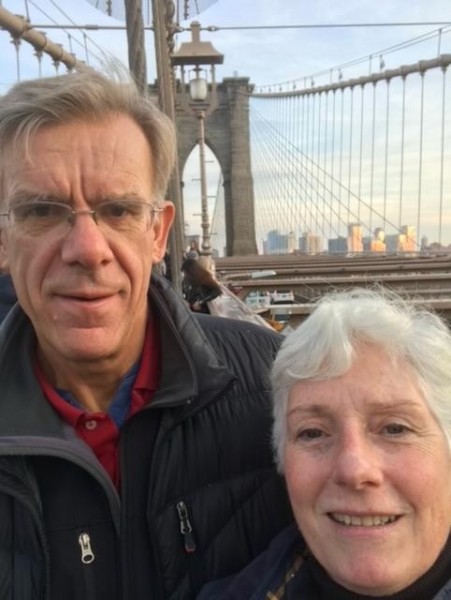 and telling him I couldn't carry on as I was.” Russell’s mother had died the previous year after a 12-year battle with Alzheimer’s disease, and the thought of early-onset dementia was a prospect he couldn’t face.

In January 2019, Russell’s local neurologist referred him to a larger hospital in London, where CT scans and X-rays suggested Russell had a CSF leak, but doctors were unable to pinpoint its source.

Doctors have known for some time that spontaneous CSF leaks along the spinal cord can be caused by a piece of bone piercing the dura, weak dura that tears on its own, or cysts that form along the spine. Injecting contrast dye makes these leaks visible on CT scans.

But about 10 years ago, Schievink discovered a “hidden” cause of CSF leak: the CSF venous fistula. In these cases, the dura ruptures at the point where a blood vessel is attached, allowing CSF to drain directly into the blood vessel and causing a leak that doesn’t show up on traditional imaging.

The London neurologist who identified the brain sagging told Claire, “I really hate to say this, but we can’t fix your husband. You have got to take him to America.”

Claire contacted Schievink’s office at Cedars-Sinai after seeing his name appear frequently in her son’s online searches. In May 2019—three years after the onset of his symptoms—the Seckers flew to Los Angeles.

“I made a small incision in his back, found that blood vessel and placed two titanium clips on it to stop the leak,” said Schievink.

Schievink said that after surgery, symptoms—even symptoms that patients have experienced for decades—are completely reversible, and in many cases, immediately. That proved true for Russell.

“The mental issues resolved almost straightaway,” Russell said. “In terms of functional life, the issues completely reverted as soon as I'd had my surgery. Within a week I was normal.” The only activity he didn’t resume was ultra-distance running. “But that’s OK. I did some good races in my time,” he said.

The Seckers now work to raise funds and awareness for the condition in hope of sparing others with CSF leaks the ordeal Russell and his family endured. He knows firsthand the importance for these patients of “having someone in your corner.”

“Two things saved my life,” Russell said. “One was Dr. Schievink and his team. The other was Claire, because without Claire's advocacy I would not be alive.”

Schievink said that raising awareness is essential, because it’s often the persistence of supportive friends or family members that leads to a diagnosis. “I’m certain that for every patient who is diagnosed with dementia caused by brain sagging,” Schievink said, “there are many more in nursing homes, in jail, or who have passed away without the correct diagnosis.”

Read more on the Cedars-Sinai Blog: Taking Care of a Loved One—and Yourself

A Survivor’s Guide to Brain Cancer

Sheri Saenz is enjoying everyday pleasures as a Laguna Niguel grandmother, crafting and camping with her granddaughter and grandson and vacationing with her husband of 34 years.But 30 years ago, in 1992, Saenz received a brain cancer diagnosis that …
Read more

Cedars-Sinai Experts Say, However, That While COVID-19 Vaccines Don’t Increase the Risk of Stroke, Infection Does

Newly compiled data evaluated by researchers in the Department of Neurology and the Smidt Heart Institute at Cedars-Sinai shows that COVID-19 vaccines do not raise stroke risk—but that severe COVID-19 infection does. Physician-scientists hope this …
Read more