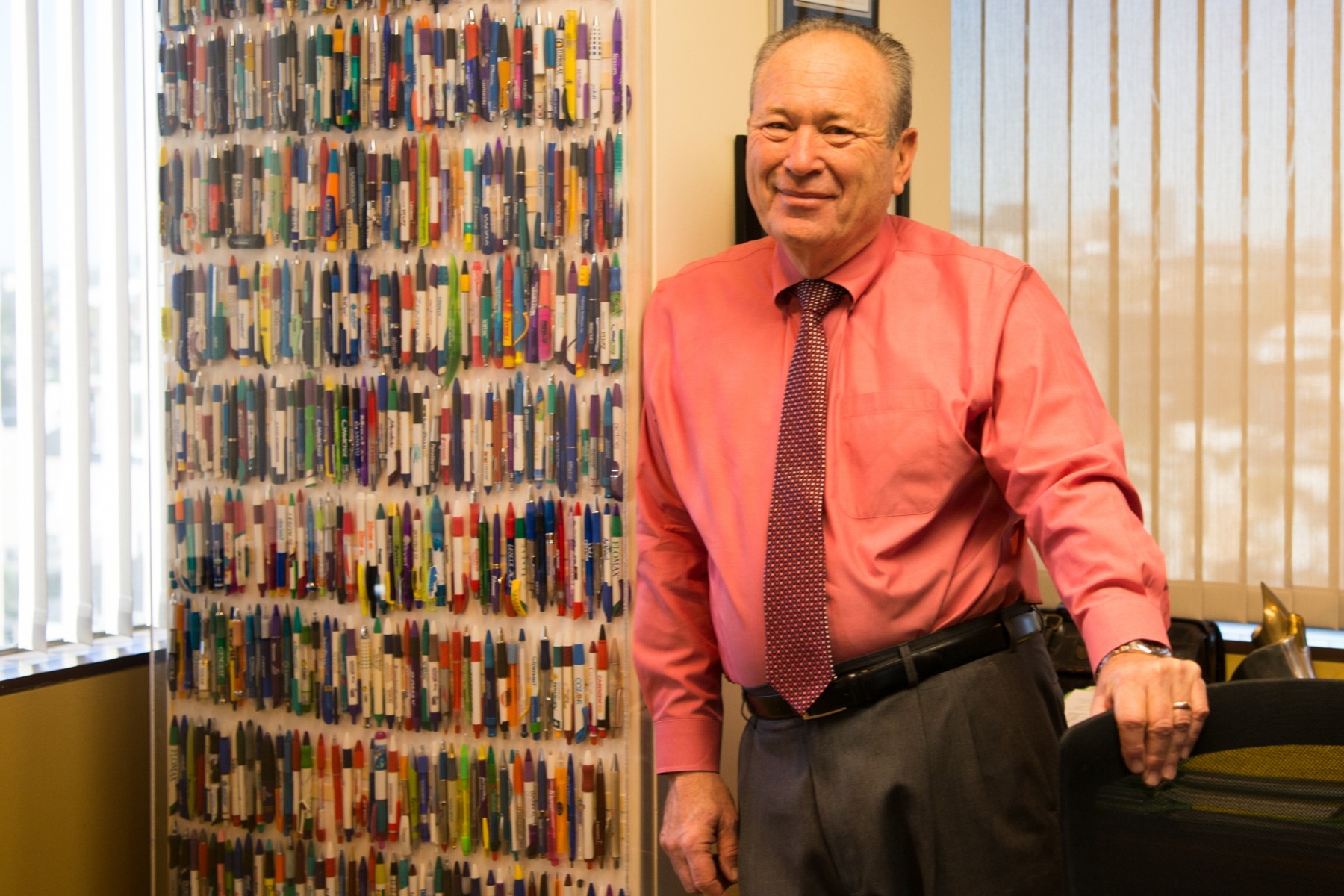 The pen is said to be mightier than the sword. That may be, but pens are certainly easier to collect and display.

Jeffrey Caren, MD, a cardiologist at Cedars-Sinai, knows all about that. Over a six-year period, he amassed a vast and unrivaled collection of branded pharmaceutical company pens. Patients who visit his West Tower office can marvel at the display of hundreds of the one-time promotional writing gifts, which tout everything from Viagra to Lexapro.

Over the years, Caren’s unusual collection has garnered national attention from major media outlets including The New York Times and ABC World News Tonight. Last summer, a portion of the collection was shipped to Oakland where it was showcased in a temporary exhibit at the Museum of Capitalism. An estimated 10,000 visitors beheld the mighty pen spectacle.

“We chose Dr. Caren’s pens because they help tell the story of capitalism,” said Timothy Furstnau, curator of the Museum of Capitalism.

Furstnau explained the pens represent a specific historical period and American cultural practice that demonstrate the “outsized” influence on human health and healthcare.

“They are a great example of an ordinary person living within capitalism having the foresight to collect something that many of us see every day, but don’t recognize the value of – which is how many of our collections are assembled,” added Furstnau. 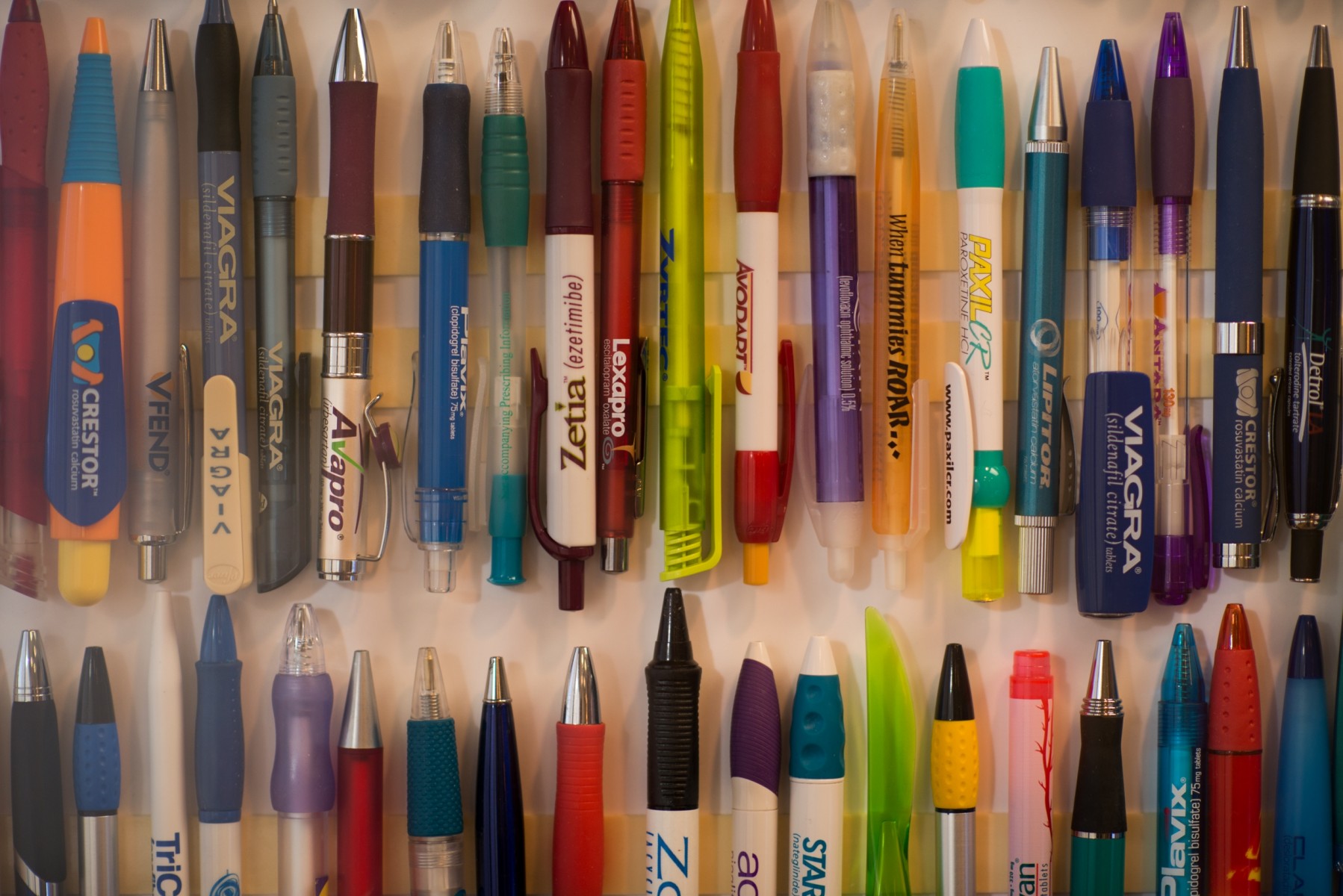 Accumulating a massive pile of pharmaceutical pens was hardly an endeavor Caren ever saw himself pursuing. True, he has enjoyed numerous hobbies including photography and model ship building, as well as assembling other collections of U.S. stamps, wine corks and police and firefighter coffee mugs.

But his pen collection grew out of the common practice more than a decade ago of pharmaceutical companies giving away free pens and other branded items to help encourage sales for their products. Caren noticed that each pen was dramatically different in design.

“I decided to make a little fun of the process,” said Caren.

Caren soon made it clear to pharmaceutical representatives that he wouldn’t talk to them unless they brought in a pen first. The representatives complied so much so Caren soon had to modify that rule. Now, they had to bring in a pen Caren didn’t already have.

“They started scrambling,” he said. “They knew they couldn’t come in here without a fresh pen.”

In all, Caren estimates he took in more than 1,200 pens. The writing implements, he proudly notes, are all in mint condition.

“They’ve never been written with by human hands,” he said. “At least, not in my custody.”

Their pristine beauty is on permanent exhibit in his office. About 600 pens are in a transparent case affixed to an office pillar. He and his wife spent about $600 on the display and devoted a weekend to carefully gluing each pen inside the case.

Now, he can’t imagine his office without his pen pillar.

“It’s pretty ugly without the pens,” he said. “This is what they call industrial art.”

His pen collection would certainly be bigger today if the giveaways weren’t discontinued. In 2009, the pharmaceutical industry imposed a voluntary ban on distributing the branded items to physicians.

“I would have gone on collecting those pens forever,” he said.