On Aortic Disease Awareness Day, a Patient and His Physician Urge the Public to Learn the Symptoms and Risks Associated With the Common Condition 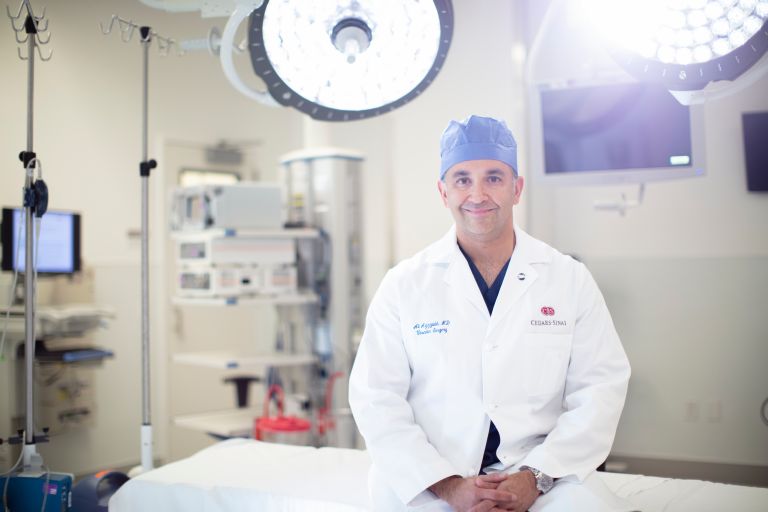 Aortic dissections can be mistaken for a heart attack because the symptoms can be similar, said vascular surgeon Ali Azizzadeh, MD. Photo by Cedars-Sinai.

When James Inman, 59, first experienced chest pain one night, he tried to brush it off and go back to sleep. But the pain became unbearable and Inman felt like something was wrong, so he called 911.

As it turned out, Inman was right. Something was very wrong.

After being evaluated at his local community hospital in Long Beach, Inman was transferred by helicopter to the experts at Cedars-Sinai. It was there that he was quickly diagnosed with an aortic dissection—a tear that develops along the inner layer of the aorta, the artery that pumps blood out of the heart to the rest of the body. Aortic dissection is a medical emergency that requires immediate surgical intervention.

"James's decision to call 911 absolutely saved his life," said Ali Azizzadeh, MD, one of Inman's surgeons and director of Vascular Surgery at the Smidt Heart Institute at Cedars-Sinai. "The death rate for aortic dissections increases 1% every hour the diagnosis and surgical repair are delayed."

Today, on Aortic Disease Awareness Day, Inman, Azizzadeh as well as other patients and physicians are urging the public to learn more about aortic dissections, including symptoms and risk factors, while also underscoring the importance of seeking urgent medical attention if symptoms—such as severe chest, back or abdominal pain, shortness of breath, pain in the arms or legs, weakness, heavy sweating or anxiety—arise.

“Immediate access to an experienced surgical team can be the difference between life and death for patients with sudden aortic dissection. Every second and every decision matters," said cardiac surgeon Joanna Chikwe, professor and chair of Cardiac Surgery in the Smidt Heart Institute. "After surgery for an aortic dissection it’s especially important for our patients to have regular monitoring from an expert team to detect and prevent future aneurysms and dissections.”

Only three types of imaging studies can identify an aortic dissection, said Azizzadeh, including a CT, MRI or transesophageal echocardiogram. A chest X-ray and an electrocardiogram cannot rule them out.

"If you have a bicuspid aortic valve, which is two leaflets instead of the typical three, you need to be monitored for thoracic aortic disease," said Azizzadeh. "It's also important to understand that several lifestyle and trauma-related conditions can trigger aortic dissections."

"These women are at higher risk of aortic dissection during late pregnancy and delivery," said Azizzadeh. "They should be carefully monitored by a cardiovascular specialist."

To heal Inman's severe aortic dissection, he underwent several procedures over the course of eight months, including emergency open-heart surgery, a debranching procedure and most recently, Thoracic Endovascular Aneurysm Repair, or TEVAR— the final step to repair his aorta.

Today, Inman is preparing to return to work as a maintenance technician, a relieving next step after months of procedures and recovery.

"Take your health and symptoms seriously," said Inman, when asked what he wants others to know about aortic dissections. "I don't know where I'd be if I waited a moment later to call 911. I'm so lucky my incredible care team diagnosed the issue so quickly and healed my bleeding heart."