New England Journal of Medicine: Nearly 64% Reduced Their Blood Pressure to Healthy Levels After Barbers Promoted Follow-Up With Pharmacists in the Barbershops 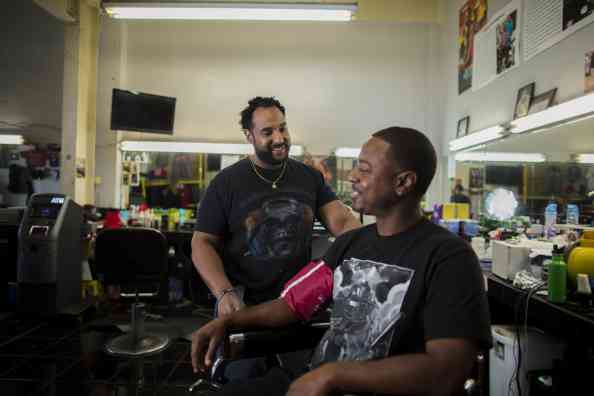 African-American men lowered their high blood pressure to healthy levels when aided by a pharmacist and their barber, according to a new study from the Smidt Heart Institute.

The findings were published today in The New England Journal of Medicine and presented as Late-Breaking Clinical Trial at the American College of Cardiology's 67th Annual Scientific Session and Expo in Orlando, Florida.

Uncontrolled high blood pressure is a leading cause of disability and premature death among African-American men, who have less physician interaction than African-American women—necessitating community outreach.

"When we provide convenient and rigorous medical care to African-American men by coming to them—in this case having pharmacists deliver that care in barbershops—blood pressure can be controlled and lives can be saved," said Ronald G. Victor, MD, associate director of the Smidt Heart Institute and the study's lead author. "High blood pressure disproportionately affects the African-American community, and we must find new ways to reach out so we can prevent strokes, heart attacks, heart failure and early deaths."

The study included 319 African-American men recruited from 52 barbershops in the Los Angeles area. Participants had a systolic blood pressure reading of more than 140 mmHg, placing them at high risk of heart attack and stroke. The men received intervention aimed at lowering blood pressure. Under the most recent guidelines, blood pressure below 120/80 mm Hg is considered normal.

The men were randomly assigned to two groups. The first group's barbers encouraged patrons to meet with specially trained pharmacists who met the men monthly in the barbershop. The pharmacists prescribed blood pressure medication, monitored blood tests and then sent progress notes to each patron's primary care provider.

In the second group, barbers encouraged their patrons to follow up with a primary care provider for treatment and make lifestyle changes, such as increasing exercise and decreasing salt consumption.

"High blood pressure disproportionately affects the African-American community, and we must find new ways to reach out so we can prevent strokes, heart attacks, heart failure and early deaths."

"It's the silent killer, and it has cost the lives and health of a lot of good men," said Eric Muhammad, whose Inglewood shop, A New You Barbershop, participated in the study. "It's a no-brainer that black men are at the highest risk of high blood pressure. What's different about this study is it looks at ways to effectively bring it down with the help of your friends, family and support group."

Muhammad was so committed to the cause of reducing hypertension in his community that he not only recruited his own patrons for the study, but also helped recruit 50 other barbershops to participate. He says he believes the program can make a significant difference in the health of African-American men, and that's why it was important to him to be involved.

"A big takeaway from this study is to release the fears," said Muhammad, who is a co-author of the study. "We cannot fear what the doctor will tell us. Dr. Victor has a very sincere desire to bring down blood pressure in people in general, and in black men in particular. Since I could see his heart in this, it was easy for me to offer assistance."

A previous study by Victor, published in 2011, showed that barbers could be effective in helping their patrons battle hypertension. The new study is the first to show that linking health promotion by barbers to advanced medical intervention in a barbershop setting can be effective in reducing blood pressure.

C. Adair Blyler, DPharm, CHC, a pharmacist who treated patrons while they were in the barbershops, said the location was key in reducing blood pressure.

"There is a different level of trust and respect that's earned when you meet people where they are, instead of in a hospital or clinic," Blyler said. "The rapport I've been able to establish with this group of patients has been unlike any other I've had in my professional career."

That level of trust and rapport is essential in treating hypertension, because it's a chronic condition that requires ongoing care and lifestyle changes, Victor said.

"This is a very significant effect for a hypertension trial of any kind," said Victor, whose own hypertension was diagnosed by a barber in Dallas during his first barbershop-based study in the 1990s. "Once you have hypertension, it requires a lifetime commitment to taking medications and making lifestyle changes. It is often challenging to get people who need blood pressure medication to take them, even as costs and side effects have gone down over the years. With this program, we have been able to overcome that barrier."

Researchers have started a second phase of the study to determine if the benefits can be sustained for an additional six months. Victor also hopes to expand the program to other parts of the country and to reach a larger population, including African-American men with more moderate blood pressure levels.