Frank Coburn Is the First Patient in Southern California—and Possibly First in the U.S.—to Undergo the Lifesaving Surgery

To anyone else, it’s just a walk around the block. But for Frank Coburn, 57, and his wife, it’s a miracle.

A miracle that resulted from Coburn becoming the first Southern Californian—and possibly first in the U.S.—to receive a minimally invasive double lung transplant. The procedure was performed at the Smidt Heart Institute.

“After getting the call that a pair of lungs became available and I needed to be at the hospital immediately, I remember being wheeled into the operating room, finally feeling calm and ready to trust the process,” recalled Coburn, a Huntington Beach resident and longtime boat mechanic. “Once I woke up, my care team shared I had undergone a minimally invasive procedure instead of the traditional, more invasive approach. I was so fortunate and felt so proud to be the first. Truly lucky.”

During a routine lung transplant, surgeons usually create a “clamshell” or sternotomy incision, which involves breaking the breastbone in two pieces and requires many patients to rely on a heart-lung machine.

Under the expertise of Pedro Catarino, MD, director of aortic surgery in the Smidt Heart Institute and a pioneer in Coburn’s innovative technique, and Dominick Megna, MD, surgical director of the Lung Transplant Program, the minimally invasive lung transplant requires an incision between the ribs that is not much longer than a drivers license. With the minimally invasive transplant, patients usually do not need the assistance of a heart-lung machine, Catarino said.

The technique was developed at the Hannover Medical School in Germany and perfected by Catarino at his former hospital, Royal Papworth Hospital in England. Catarino, who joined the Cedars-Sinai faculty last year, has taught the procedure to dozens of surgeons throughout the world, including other faculty members on the expert transplant team at the Smidt Heart Institute. 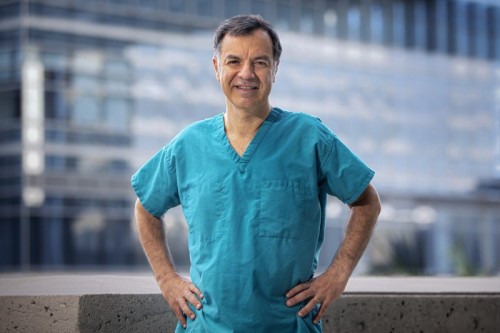 That’s welcome news to many patients, including Coburn, who didn’t have time on his side after two decades of declining health and increasing breathlessness.

It took more than 20 years for Coburn to receive a correct diagnosis of pulmonary fibrosis, a condition that causes scarring of the lung tissue. By the time he was diagnosed, his disease was so severe that he would regularly have coughing spells lasting more than an hour.

“I would be lying on the ground, unable to move or do anything other than cough uncontrollably,” said Coburn, a father of two and small-business owner. “My quality of life had all but diminished.”

Once he was properly diagnosed, Coburn's local pulmonologist sent him to the leading pulmonary fibrosis center at the Cedars-Sinai Women’s Guild Lung Institute. Coburn quickly placed his care in the hands of his lung team—an expert group ranked third in the nation for both pulmonology and lung surgery. But after eight months, his pulmonologists shared the news Coburn had been expecting—yet dreading.

“I was in need of a double lung transplant,” said Coburn. “Hearing that news, it was just surreal. It was shocking.”

After undergoing extensive testing—and an unexpected COVID-19 diagnosis that landed him in a local hospital—Coburn was placed on the transplant list in mid-March. He got a call from the Smidt Heart Institute transplant team a mere five days later.

“That phone call changed everything,” recalled Coburn. “I remember my knees going weak and my wife starting to pace. We had so many things left to get in order. But we quickly understood this was my chance at a renewed, healthy life.”

Joanna Chikwe, MD, who oversees lung transplant surgery and is professor and chair of the Department of Cardiac Surgery in the Smidt Heart Institute, says everyone who came to the operating room that day knew they were witnessing something very special.

“Watching Dr. Catarino perform this state-of-the-art procedure was like watching him move U.S. lung transplantation forward 15 years, in just 15 minutes,” said Chikwe, the Irina and George Schaeffer Distinguished Chair in Cardiac Surgery in honor of Alfredo Trento, MD. “We have one of the most experienced transplant teams in the world and it’s remarkable to watch how they change patient lives each and every day.”

Coburn’s medical doctor, Reinaldo Rampolla, MD, medical director of the Lung Transplant Program, prepared him for the transplant and joined in the operating room that early morning in March.

“We are already seeing these patients seem to recover much faster with this minimally invasive approach,” said Rampolla. “This could be a real game-changer for our lung transplant patients who are often so desperate to resume their once normal lifestyles.”

For Coburn, his transplant means going from a sedentary lifestyle and declining health, to taking daily walks with his wife and planning for a future filled with motorcycle trips, competitive tennis matches and pickleball games with his wife and friends.

“Once you establish you are in good hands, you can relax and start to heal,” said Coburn. “Every nurse, doctor and support staff at Cedars-Sinai has been a 10 since the moment we made that first call. And because of their expertise, I am here today, breathing out of strong, healthy lungs I am so grateful to have been given.”

Investigators from the Women’s Guild Lung Institute at Cedars-Sinai have discovered that zinc, a common mineral, may reverse lung damage and improve survival for patients with a deadly age-related condition known as idiopathic pulmonary fibrosis …

Cardiothoracic surgeons in the Smidt Heart Institute at Cedars-Sinai recently performed a groundbreaking robotic-assisted lung transplant. With a new right lung, the patient, a 69-year-old man from Claremont, California, is back to exercising and …