Like many collegiate athletes, Dahlia Fink, 18, was introduced to sports at a young age.

"When she was 4 years old, I took her to a baseball clinic at the park, and that was when she first started playing," said Dahlia's father, Christopher Fink. "I played catch with her and taught her how to bat, and she's been smacking the ball since."

Dahlia began pitching when she was 10, and by the time she was 12, she was playing in competitive, fast-pitch softball leagues. 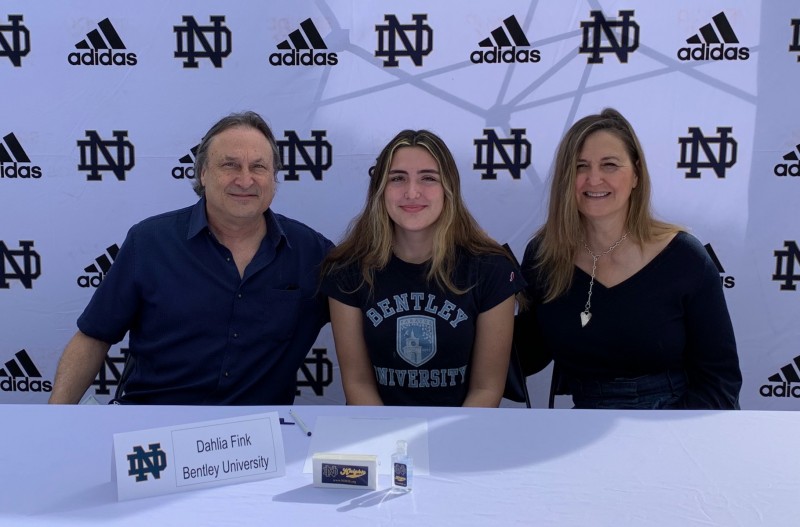 By the time Dahlia entered high school, she was on the radar of Division 1 university softball recruiters, was awarded League MVP as a sophomore, and during her junior year at Notre Dame High School in Sherman Oaks, California, she was offered a softball scholarship to Bentley University in Boston, Massachusetts.

"I love everything about softball. I love the competitiveness,” Dahlia said. “I love just playing the sport and I love everyone in this sport."

Her love for softball was tested shortly after she verbally committed to attending Bentley University when she started to experience back pain.

The pain started out as soreness, likely from overuse, she thought, so she played through the pain. Then she was in a car accident and the pain became unbearable.

"Dahlia is the type of person who pushes through pain," said her father. "When she was younger, she had a broken thumb in the middle of a ballgame and she kept wanting to go up and bat. She's had breaks, she's had bone bruises, and through it all, she just wants to keep playing. She's tough like that, but this pain was very difficult for her."

As Dahlia's pain magnified, her mobility also began to deteriorate. She could hardly sit, stand or bend over.

"It definitely took a toll on us because we were very concerned about her pain,” said Dahlia's mother, Debra Fink. "We took her to several doctors and tried different modalities to help heal her and nothing was working, nor could anyone give us a definitive answer."

Over the course of a year, Dahlia saw half a dozen physicians who gave the Finks different theories as to the cause of the pain. And there was one memorable physician who thought the pain wasn’t real and recommended Dahlia see a sports psychologist.

From steroid injections and massage therapy to acupuncture and chiropractic care, Dahlia tried most of the therapies recommended, yet nothing seemed to work.

"When you pitch in softball, you have to bend over, and she could no longer do that without extreme, excruciating pain, so she had to stop pitching," said Christopher Fink.

As Dahlia approached the end of her high school senior year, the fear of losing her scholarship was becoming a reality, and the unknown left the Finks feeling scared and frustrated.

That’s when they were referred to pediatric spine surgeon David L. Skaggs, MD, MMM, co-director of the Cedars-Sinai Spine Center, director of the Pediatric Orthopaedics Program and executive vice chair of the Department of Orthopaedics.

"Dahlia was in excruciating, debilitating pain for over a year, and we can't overestimate how much chronic pain changes someone's personality," said Skaggs. "When a teenager is in chronic pain and can't work out with their teammates, it can take an emotional toll on them and their family."

Skaggs is one of a handful of orthopaedic experts in the U.S. who have begun identifying the hard-to-detect injury within the last 10 years. Skaggs' research has shown that facet fractures aren't typically seen in X-rays or magnetic resonance imaging (MRI) but can be detected through a computed tomography (CT) scan.

"Dahlia basically had a broken spine," said Skaggs. "Her bone had a fracture approximately 5 millimeters big in the joint of her spine where the two bones should move smoothly together.

The treatment: Remove the irritating bone fragments during surgery before they cause irreparable damage to the spine.

"If someone has a piece of sand in their eye, you're not going to send them to therapy or give them a brace or do an injection,” Skaggs said. “We're going to take the piece of sand out before it does any damage. The same can be said when there is a sharp piece of bone in the middle of the facet joint that is supposed to be smooth cartilage. We want to get that piece of bone out of there, so it doesn't do any more damage." 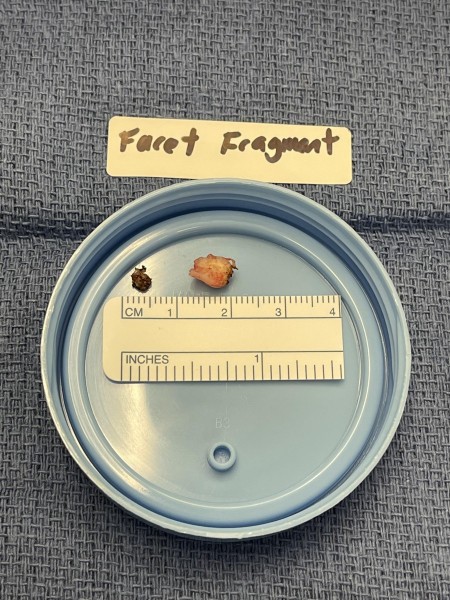 Once Skaggs identified the injury, Dahlia underwent minimally invasive surgery where Skaggs removed bone fragments from two facet fractures in her back.

Within four weeks of surgery, Dahlia was back to playing softball and pitched her best postseason games. Now, she’s playing college ball and having the time of her life.

"I'm currently in season right now at Bentley University as a starting pitcher and hitter,” Dahlia said. "I love it here and I love playing softball here."

Over the past 10 years, Skaggs has operated on 24 young adults with facet fractures, but he worries there are many athletes unnecessarily suffering from the injury.

"What's unusual is not the surgery—the surgery is pretty straightforward," Skaggs said. "The problem is that most spine specialists don't know to look for this problem. You have to know that it exists, and how to find it, or you're never going to see it. I'm worried that there's probably thousands of kids out there with facet fractures and their doctors haven't found it yet."

Read more from the Cedars-Sinai Blog: Supporting the Spine From Adolescence to Adulthood

Rebuilding a Jaw in a Day

Patients who lose a part of their jaw—whether from injury, infection, disease, or as a side effect of cancer treatment—can have the missing jawbone replaced through reconstruction. But most are left with a life-altering dilemma: Their new jaw is …
Read more