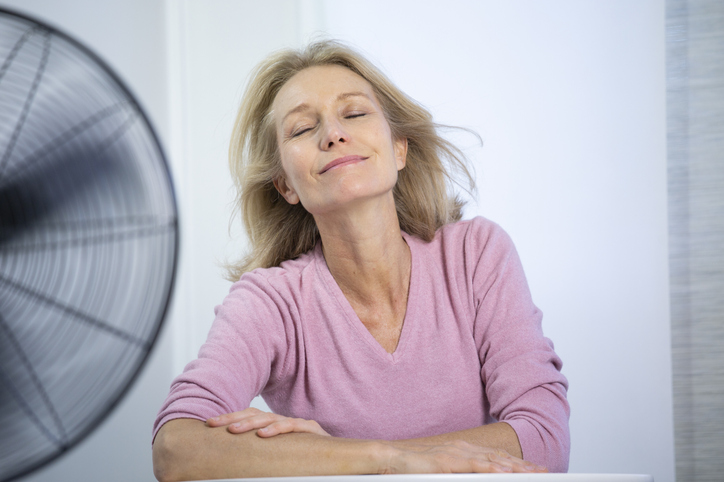 Hot flashes are normal. Bleeding after menopause is not, says a Cedars-Sinai expert. Photo by Getty.
A menopausal woman having a hot flush.

Woman’s Day recently interviewed Jessica Chan, MD, assistant professor of OB-GYN at Cedars-Sinai, about bleeding after menopause and why women should never ignore that symptom.

As the Woman’s Day story details, transitioning out of menopause comes with uncomfortable yet common side effects like hot flashes, mood swings and weight gain. But, if your body is suddenly experiencing period-like bleeding after menopause, it’s time to call your doctor's office and make an appointment.

Menopause is considered official when a women does not have a menstrual period for one year. Typically, women enter menopause around 51 years of age, but it can range from as young as 40 to 58 years old. And before menopause begins, most women experience changes in their menstrual cycle.

“During this transitionary time, your bleeding pattern may start to change due to some wild fluctuations in your hormone levels,” Chan told Woman’s Day. “At first, you usually have a shortening of the cycle. Then you may have a change in bleeding pattern. It can be lighter. Then there’s a lengthening of the cycle. You may skip some periods before you stop altogether.”

But If bleeding occurs after menopause, doctors need to rule out other conditions. Post-menopausal bleeding can be a symptom of endometerial cancer -- also called uterine cancer. About 10% of postmenopausal bleeding experience is due to cancer, the Woman's Day article states.

“Sometimes, the cause of bleeding can be a fibroid or a uterine polyp, which can be removed,” said Chan. “There can also be bleeding if you’re having hormone therapy. But the one you don’t want to miss is endometrial cancer.”