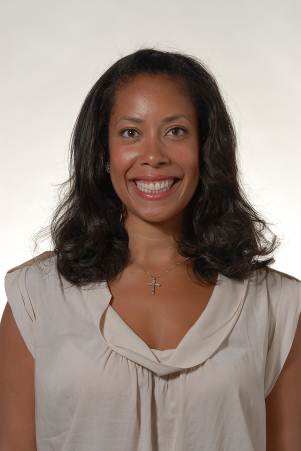 Los Angeles - Feb. 6, 2013 – The first time Lindsey Ross worked in the Department of Neurosurgery at Cedars-Sinai Medical Center, she was a medical school student and the 2008 recipient of the Pauletta and Denzel Washington Family Gifted Scholars Program in Neuroscience award.

Now she is a doctor, having earned her medical degree from the David Geffen School of Medicine at the University of California, Los Angeles. Again she is working with and learning from some of the most respected doctors and research scientists in the nation, this time as a first-year resident in Cedars-Sinai’s Neurological Surgery Residency Program, designed to help new surgeons excel in the operating room, research laboratory and patient bedside by providing a well-rounded, wide-spectrum experience.

“One of the great things about Cedars-Sinai is that you can see it evolving in real time. I believe in Cedars-Sinai and the Neurosurgery Department, I see it being an even stronger force in the future, and I’m very excited to be part of it,” says Ross, a Los Angeles native and the oldest of three children. She attended elementary school at The Center for Early Education in West Hollywood, blocks from the medical center.

Her interest in medicine was influenced by her parents – her mother is an obstetrician-gynecologist; father an internist – and by family medical crises. Her mother was diagnosed with breast cancer when Ross was a senior in high school, and a brother had a neuroblastoma – a nerve tissue tumor – at birth. She says these crises and another event that occurred while she was in the Washington Scholars program profoundly affected her career path.

Scheduled to watch an early morning surgical case, Ross stayed home one evening when friends went out to a few favorite places in Hollywood. One friend, an excellent college athlete, was struck by a car driven by a drunk driver, suffering fractures of the neck and extremities and other serious injuries. He was rushed to Cedars-Sinai’s Neuroscience Critical Care Unit where he lay in a coma for more than two weeks.

“This was the first time I had seen somebody in a coma, and I was really fascinated by everything I learned,” says Ross, who at that point in medical school had been exposed to more classroom instruction than patient contact. “I think that experience inspired me and I said, ‘This is definitely what I would like to do.’ It was amazing to see him wake up after two weeks, open his eyes, breathe on his own and move on to the rehab unit. He’s not playing basketball like he was in college, but he is walking again and he’s still the same person I knew.”

As a Washington Scholar in 2008, Ross worked in the Maxine Dunitz Neurosurgical Institute laboratories of Julia Y. Ljubimova, MD, PhD, director of drug delivery and nanomedicine in the Department of Neurosurgery. Ljubimova’s research is developing an innovative delivery system that uses a combination of drugs to target important mechanisms in cancer cells.

In her residency, which started on July 1, 2012, Ross was introduced to neurosurgery before entering rotations in neurocritical care and subspecialty areas of neurology. She says she was especially touched by encounters she had in the Neuro ICU.

“Every day, there would be family meetings where the residents would learn to talk with families about end-of-life matters and making challenging decisions for loved ones,” she recalls. “The attending physician would usually be the leader in these discussions and we would watch how they presented the information. Everyone has their own style, but it was interesting to see that it can still be emotionally painful to deliver bad news after 20 or 30 years of experience. I knew this profession would be mentally difficult, and I knew it would be physically difficult, but I probably didn’t fully understand how emotionally difficult it is.”

In February, Ross rotated back to neurosurgery, gradually taking a more hands-on, decision-making role, although still with the guidance of chief resident Sunil Jeswani, MD. She says she aspires to work in an academic setting to participate in research and contribute to the education of residents and medical students. And she has developed a strong interest in pediatric neurosurgical oncology.

“I’m a very upbeat and positive person, and even working with people who are the sickest of the sick with the most devastating diseases, I can find something positive. I think that helps make me an empathetic and relatable physician,” she says. “Nobody knows how much time they have. That’s not really determined by us. I think while we’re here, we do the best we can with what God has given, and I think staying positive is an important part of healing.”

The Neurosurgery Department, chaired by Keith L. Black, MD, the Ruth and Lawrence Harvey Chair in Neuroscience, started funding the Washington scholarships in 2004 to support students who demonstrated the desire, initiative and aptitude to make significant contributions in the sciences. Pauletta and Denzel Washington, strong advocates for the strength of family and the power of education, gladly lent their names and continue to take an active role in the program.

“One night when I left the hospital pretty late and it was dark outside, and I had come in that morning when it was dark, I thought, ‘This is a complete dream come true,’” Ross recalls. “When my family once asked what my absolute dream position would be – what specialty – I said definitely Cedars-Sinai’s Neurosurgery Department. At that point a few years ago, it seemed so far away and never obtainable. Now every time I leave the hospital really, really late, or it was a hard day, I look back on that and am just very happy. I feel very privileged and grateful to be in this position.”