On a recent Saturday, Gerald Freeny got a sneak peek at a few of this year’s Rose Parade floats being decorated by volunteers at a warehouse in Irwindale, California. The behind-the-scenes look captivates many, but it isn’t new to Freeny. He comes here, year after year, as part of his role as a member of the Tournament of Roses Association.

But this year is extra special. That’s because Freeny will be riding in the parade this year, as Cedars-Sinai’s representative on the Donate Life float, which honors transplant donors and recipients.

“This is the first time I'll be riding,” Freeny said. “I won't have to be worried about anything in the parade. I'll be practicing my wave. And I'm looking forward to it.”

As a young, healthy law enforcement officer in the early 1990s, Freeny first knew something was wrong with his health when he felt like he didn’t have energy for his workouts.

“I was working out in the gym, I was working out at home, and my body just—I didn't have the stamina I had, so I went to the doctor, ran blood tests and my liver numbers were just way off,” he said.

Doctors told Freeny that he had bile duct cancer, and that in order to operate, surgeons would have to cut through his liver, meaning he would need a new one. He had that surgery, and the liver transplant, in 1993, at just 33 years old.

That transplant allowed him to continue to pursue his career and amass an extensive resume of community involvement.

Things were going well until 2010, when Freeny found out he had cancer again. This time, it was lymphoma. Treatments for the cancer were hard on his body, and ultimately, Freeny’s doctors told him he would need a new liver and a kidney. He received those transplants at Cedars-Sinai in 2015.

“These multiorgan transplant surgeries are complex,” said Kim. “They are typically long procedures, not only for the patients, but for their 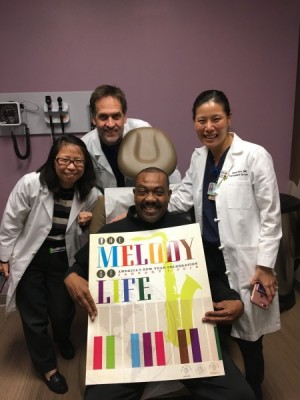 loved ones as well.”

Yet, Freeny’s mother, wife and daughter, along with several of his fraternity brothers, never left the waiting room. They slept on chairs and stayed for the entire surgery. To this day, they remain on a first-name basis with many of the doctors and nurses on Freeny’s care team.

"Helping patients and their families look forward to a brighter future is what transplant medicine is all about," Nissen said.

Only a few years after the double transplant, Freeny served as Rose Parade president, a role that required extensive travel and public speaking. He credits his care team with getting him through it.

“They took care of me,” Freeny said. “I was in the hospital every other day getting some type of infusion to keep me up. And they got me through the parade.”

Freeny joined the Tournament of Roses Association in 1988 and has served on every committee in the organization. He made history as the organization’s first Black Rose Parade president for the 130th parade season.

His community involvement has included a term as president of the San Gabriel chapter of the National Organization of Black Law Enforcement Executives, along with involvement in the Pasadena Police Foundation Board, Pasadena Police Citizens Academy, Pasadena Rose Bowl Aquatics Board, University Club, Pasadena YMCA Board, Black Support Group at California State University, Los Angeles, Urban League Board of Governors, United Way Fundraising Committee, Toastmasters and the Pasadena NAACP.

Freeny frequently returns to his high school to speak with young people about the dangers of gangs and drugs. He and his wife fund a college scholarship and keep in touch with its recipients. Freeny is a member of both the Kappa Alpha Psi and Gamma Zeta Boulé of Sigma Pi Phi fraternities and is active in his church. He lives in Altadena with his wife and daughter.